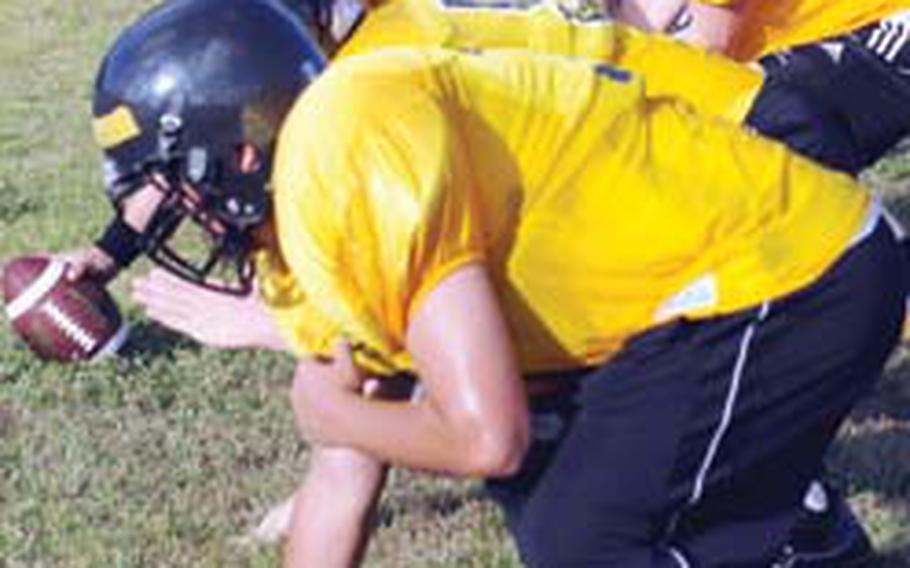 KADENA AIR BASE, Okinawa &#8212; The memory in Sergio Mendoza&#8217;s mind roars as brightly as a reactor core glows sinisterly during a nuclear meltdown.

Trinidai Stansel&#8217;s solo tackle of a player virtually twice his size, Kadena lineman-turned-fullback Jordan Ray, on a two-point conversion try that would have given Mendoza&#8217;s Panthers a 23-22 victory.

Stansel and the Seoul American Falcons prevailed 22-21 for their second Class AA football title in three years. Both at home. And at Kadena&#8217;s expense.

&#8220;If ever I wanted a do-over, that&#8217;s the one,&#8221; Mendoza said during a recent practice as the Panthers prepared to defend their three straight Okinawa Activities Council titles.

A core group of veterans teamed with players and coaches from the Foster and Kadena teams in the U.S. Forces Japan-American Football League to step up their conditioning.

But among that number is a solid core of experience, particularly at running back, where juniors Shariff Coleman, Thomas McDonald and Lotty Smith are joined by junior newcomer Dennis Sharp.

Plowing the road for them is a line led by veterans such as Tyler Broome. Stan Schrock and Norman Correa will split time under center.

They&#8217;ll do their best-of-five OAC series with arch-rival Kubasaki, and will hit the road for the first time to play in-season games against off-island teams, Robert D. Edgren on Sept. 26 and Yokota on Oct. 17.

Wherever and whomever they play, Mendoza is hoping all the hard work can bring the Panthers back to the Class AA title game.

And Kubasaki enters the season without two-year part-time starting quarterback Kaleb Robinson, who gave up football to concentrate on baseball. Seniors Mateo Sanchez and P.J. Varner take over under center, and have transfer receiver Clay Beasley from Ohio to catch their pitches.