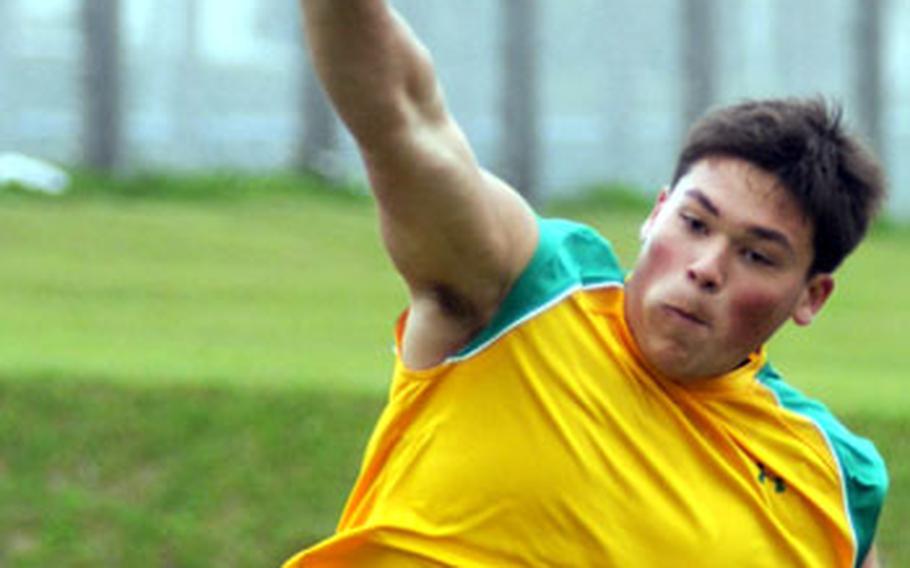 Freshman Gabriel Ahner is one of a group of underclassmen whom track and field coach Sergio Mendoza says has the potential to equal the feats of Kadena’s "Great Eight" of 2006, which went to the Kanto Plain Association of Secondary Schools meet as a non-scoring guest and won eight of 12 events. (Dave Ornauer / S&S)

KADENA AIR BASE, Okinawa &#8212; They called it a once-in-a-lifetime group: the "Great Eight," a pack of eight Kadena boys track and field athletes so talented, they won eight gold medals in the Kanto Plain Association of Secondary Schools meet in 2006.

Surely, such epic achievements could never be duplicated, right? "I thought so, too," said their coach, Sergio Mendoza.

Fast forward to 2009. There are a couple of holes, but Mendoza fields six underclassmen whom he feels can become "Great Eight 2.0."

And they&#8217;ll all be there until they graduate. "That makes for some exciting possibilities," Mendoza said.

Already, Kadena&#8217;s boys have excelled on the Pacific stage, with their sixth straight title in the April 3-4 Mike Petty Memorial Meet, plus a 400 relay meet record.

While some have said they might approach the "Great Eight&#8217;s" feats in a year or two, Mendoza said their time could be next month&#8217;s Kanto Invitational or even Saturday&#8217;s Okinawa Activities Council district finals at Koza City Stadium.

"I think we could take eight or nine boys to Kanto and make a statement this year," Mendoza said.

That harkens back to May 13, 2006, when morning rain at Tokyo&#8217;s Kinuta Park portended anything but a day for speed and distance.

Kadena won eight of 12 events; the 110 hurdles and high jump were scratched. Duran won the first of his two Kanto long-jump titles plus the 400, Jeff Morton the 100 and 200, Eric Robinson the discus, Tim Nabonne the mile and the Panthers secured both relays.

The current group is "making strides" toward similar glory, Mendoza said. "It will be exciting."

"They&#8217;ve got the nucleus of a good one," Kubasaki coach Charles Burns said. "If not this year, for sure next year."

Part of the success the last few years can be traced to coaching continuity. Mendoza has helmed the team five of the last six years; prior to that, the coaching post resembled a revolving door.

"It was unfair to the program and the kids," Mendoza said. "Kids buy into not so much a message, but the messenger, somebody who presents a vision. They care about that more than the message. You commit to the kids. Win or lose, we do it together. Show up, do your best, go hard."

"A lot depends on how hard they train, how serious they take it," Burns said. "It all depends on that attitude."

"I just caught up to where I was running last year two weeks ago," Bishop said, adding he&#8217;s going to try to match his former Zama teammate, All-American Andrew Quallio, in his senior year.

All of that has come with one of the team&#8217;s key components to start the season wearing another uniform &#8211; hurdler Cory Serfoss, another sophomore, transferred over spring break to Nile C. Kinnick.

"Somebody up above was definitely looking out for Kinnick&#8217;s track team," coach Al Garrido said of getting Serfoss, who&#8217;s stepped into the lineup at 110 and 400 hurdles.

As for this weekend, next month&#8217;s Kanto or even next year and beyond, the athletes of "Great Eight 2.0" seem to be taking nothing for granted, nor letting success go to their heads.