Underclassmen hope focus on finesse pays off with title 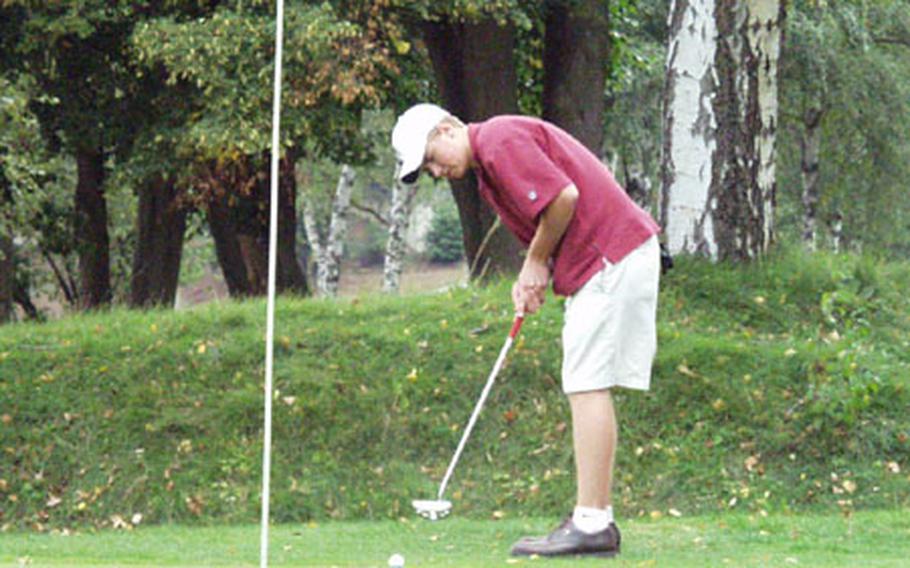 Heidelberg junior Greg Nyander rolls in a 12-foot birdie putt from the fringe Wednesday during a practice round at the Heidelberg Golf Club, Germany. (Rusty Bryan / S&S)

Two underclassmen hope improvements to their short games will lead to them hoisting the first-place trophy at this year&#8217;s European golf championships.

Both say they have worked on improving around the green for this year&#8217;s campaign.

Otterstedt doesn&#8217;t think that will be the case this year, after some summer sessions with Woodlawn teaching pro Iain Blackburn.

Nyander said he worked all summer to cut his handicap to single digits.

Sinking a few more putts could make all the difference this season, because the other parts of his game are solid, said Baumholder coach Jack Dougan.

For his part, Nyander finished six points behind Desrochers. Six points is just two pars back in the modified Stableford system.

Ottertedt said he played in several tournaments over the summer, including the Woodlawn and Heidelberg Invitationals, the big stops on the local summer golf tour.

Those events were medal play, but Otterstedt said he enjoys the Stableford scoring used in high school golf.

Also helping in Otterstedt&#8217;s summer improvement program was playing numerous rounds with his friends and soon-to-be competitors, including Nyander, he said.

All have their sites set on the two-day European championships, scheduled for Oct. 8-9 at Rheinblick golf course near Wiesbaden.

The Europeans also are the focus for golfers from Lajes, Rota and Ankara.

Rota coach Greg Jacobs is particularly enthusiastic about his chances, with newcomers Gilbert Mendez and Jim Connolly added to a team led by Jason Allard, 14th in last year&#8217;s Europeans.

In addition to his bid for a European crown, Otterstedt said he&#8217;s eager to help Baumholder defend its Division III team title. The D-III championships are scheduled for Oct. 2 on Baumholder&#8217;s Rolling Hills layout.

The Division II championships will be played concurrently with the D-III meet at Baumholder, where Patch junior Stephen Fey, sixth in Europe last season, is expected to top the field.

Heidelberg will lead with Nyander, sophomore Justin Maker (9th in Europe last season) and senior J.R. Orlando, in the D-I event Oct. 2 in Kitzingen, according to coach Jim McCauley.

Also in D-I, Ramstein will try to counter the losses of last year&#8217;s fourth- and fifth-place European finishers K.C. Bartlett and Robert Wilkins. Farrell and fellow sophomore Chris Hustead, 10th in Europe in &#8216;02, and seniors Brian Apgar and Ben Carden are expected to lead the way.

Ramstein and Heidelberg tied for the D-I crown last season.

The top prep female golfer appears to be W&#252;rzburg&#8217;s Frances Smythe, who finished third in Europe last season behind the graduated Kirsten Phillips of Heidelberg and Tara Coy of Mannheim.

Ramstein senior Anne Marie Marchand, and Heidelberg&#8217;s Dana Kaita are also expected to be in the mix, according to their coaches.