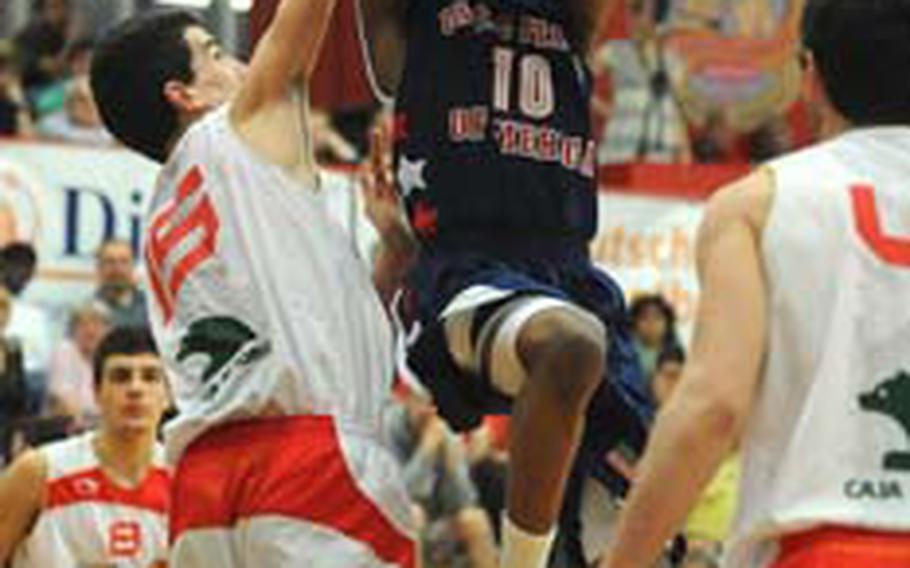 Spain&#39;s Jordi Mas, left, tries to keep Kevin Ware of the United States from scoring in the Americans&#39; 91-81 victory over Spain at the Albert Schweitzer International Youth Basketball Tournament t on Wednesday night. Ware was the top scorer for the U.S. with 22 points. (Michael Abrams / S&S)

Spain&#39;s Jordi Mas, left, tries to keep Kevin Ware of the United States from scoring in the Americans&#39; 91-81 victory over Spain at the Albert Schweitzer International Youth Basketball Tournament t on Wednesday night. Ware was the top scorer for the U.S. with 22 points. (Michael Abrams / S&S) 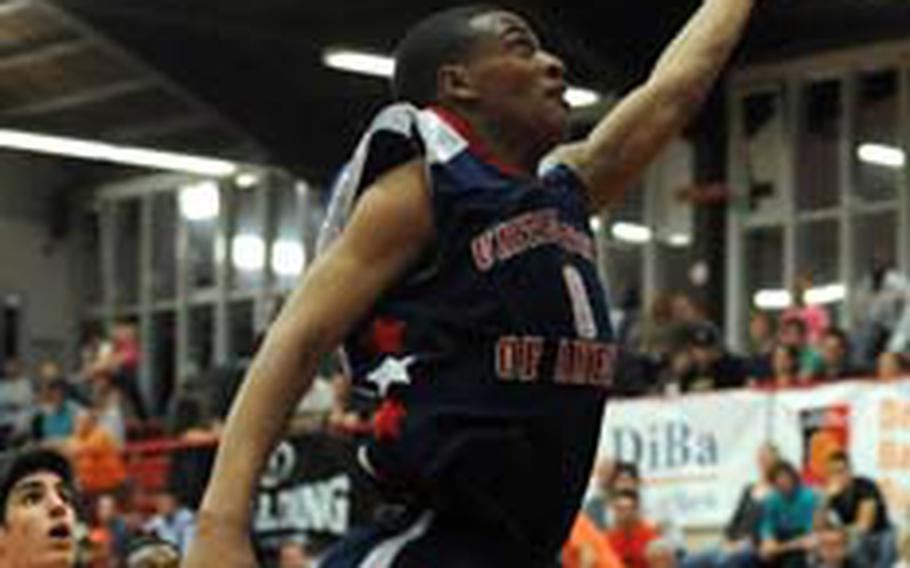 Damian Leonard of the United States sails to the basket for a layup in the Americans&#39; 91-81 victory over Spain at the Albert Schweitzer International Youth Basketball Tournament on Wednesday night. Leonard scored 19 points in the game. (Michael Abrams / S&S)

See an earlier version of this story here.

MANNHEIM, Germany &#8212; The U.S. team in the Albert Schweitzer International Youth Basketball Tournament discovered a different way of winning Wednesday night and gave itself a shot at reaching the final four of the biennial tournament.

The American team of high school all-stars, which topped previously undefeated Spain 91-81 Wednesday, played Australia on Thursday after this edition of Stars and Stripes went to press. The winner advanced to the semifinals Friday night.

"Tonight, (our shots) went in for a change," U.S. coach Larry Krystkowiak said Wednesday after the Americans, who averaged 66 points in their first three games, stepped up their offense.

Just in time, too.

"We didn&#8217;t play that well defensively," Krystkowiak said. "The offense saved us."

The defensive problems were a result of the Spaniards&#8217; efficient offense, illustrated by wide-open layups made by back-door cutters. Spain also was formidable from the perimeter, where a 6-for-10 effort from behind the three-point arc lifted Jaime Fernandez to a game-high 28 points.

Fernandez&#8217;s effectiveness from outside presented the U.S. a dilemma. Krystkowiak, a former coach of the Milwaukee Bucks, chose to leave the back door ajar.

"That&#8217;s hard to defend," he said of the back-door play the Spaniards seemed to implement successfully after every timeout. "I guess I could have gone to a zone, but against a team that shoots like that, you can get into trouble, especially now that points-differential comes into play."

Damian Leonard of Greenville, S.C., and Ryan Boatright of Aurora, Ill., each added 19 points for the U.S. Boatright a 6-foot guard, is the No. 3 scorer in this 16-team event, averaging 18.3 points per game. He put Wednesday&#8217;s game away with 43.9 seconds to play by driving to the rim for a layup and a foul that also drew a technical foul from a frustrated Spaniard. Boatright turned his five-point opportunity into four points.

The Americans&#8217; most dramatic offensive performer was Kansas Jayhawks recruit Royce Woolridge of Phoenix. He spiced his 17 points with two three-pointers from beyond NBA distance that averted shot-clock violations. For the game, Woolridge sank four of seven three-point attempts.