U.S. under-18 team down, but far from out at Schweitzer tourney 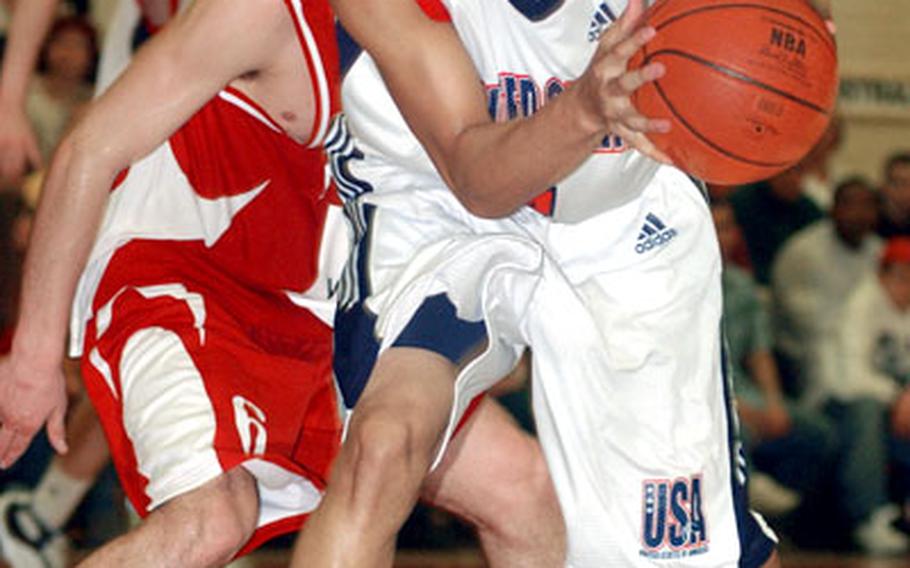 Edwin Rios of the United States looks for the outlet pass in the Americans&#39; opening game against Croatia at the Albert Schweitzer Tournament in Mannheim, Germany. The U.S. lost to Croatia 84-77. (Michael Abrams / S&S)

Edwin Rios of the United States looks for the outlet pass in the Americans&#39; opening game against Croatia at the Albert Schweitzer Tournament in Mannheim, Germany. The U.S. lost to Croatia 84-77. (Michael Abrams / S&S) Josue Soto of the U.S. goes to the basket against the outstretched arms of the Croatian defense. At left is Rich Jackson. (Michael Abrams / S&S)

What didn&#8217;t need fixing was the U.S. team&#8217;s heart. Behind by 15 points at the start of the final period, the Americans clawed back to two points down twice in the final 4:33. The Americans struggled at the free-throw line, however, going only 4-for-9 in the quarter.

That may have happened to the U.S., but for stretches in the fourth, the Americans played impressive basketball.

Beating any team in the AST is no simple feat for the Americans, who come from all over the U.S. and have just six days to learn enough about each other to take on teams that regularly practice several months each year.

Even so, McCann saw much to build on in the opening loss.

Paying for the defensive miscues began after the Americans had cut their deficit to 71-69 on a bucket by Florida State-bound Josue Soto of Jacksonville, Fla., with 4:33 to go. Croatia&#8217;s Zeljo Sakic broke open for a three-pointer, and the final reckoning arrived moments later when Bogdan Bogdanovich repeated the feat for a trey that made it 79-74 with 3:25 left. The tiring Americans were all but done.

The Americans were fortunate on Saturday they had a chance to come back at all. They put Coatia into the international game&#8217;s two-shot bonus with 6:33 to play in the first period. Croatia, however, went just 8-for-14 from the line over the span.

Change, however, was coming.

The loss left the Americans needing victories Sunday night against Israel and Monday against Spain to advance to the championship round.

Serbia and Montenegro vs. Greece, late

Serbia and Montenegro vs. Canada, 4 p.m.