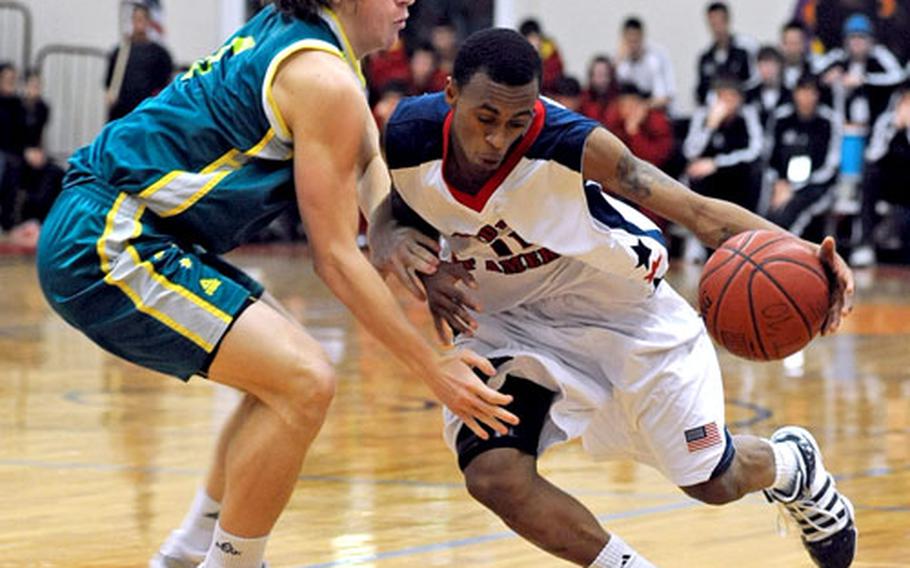 Ryan Boatright of the United States, right, drives against Australia&#39;s Corban Wroe in their second round game at the Albert Schweitzer tournament. Australia defeated the U.S. 79-66, but both teams advanced to Friday&#39;s semifinals. Boatright led all scores with 27, while Wroe contributed 12 to Australia&#39;s victory. (Michael Abrams / S&S)

Ryan Boatright of the United States, right, drives against Australia&#39;s Corban Wroe in their second round game at the Albert Schweitzer tournament. Australia defeated the U.S. 79-66, but both teams advanced to Friday&#39;s semifinals. Boatright led all scores with 27, while Wroe contributed 12 to Australia&#39;s victory. (Michael Abrams / S&S) 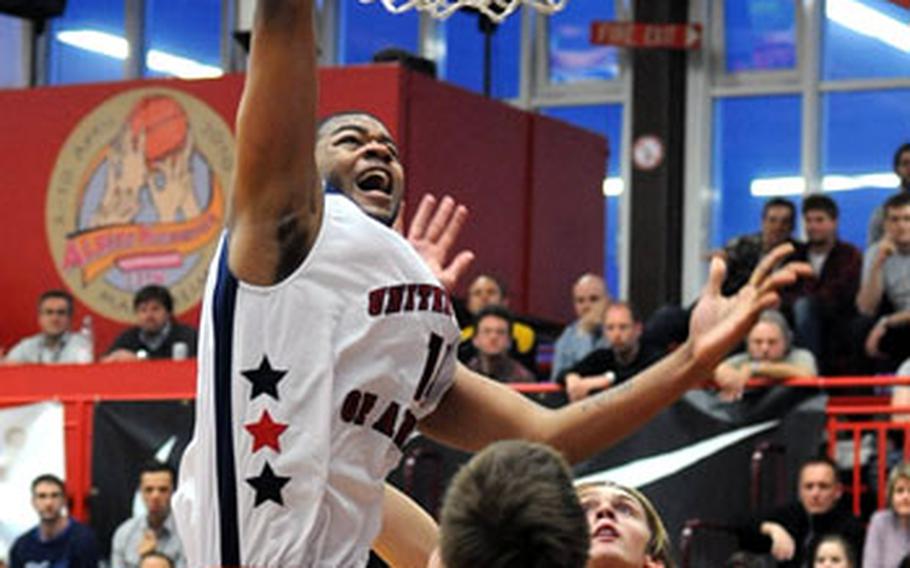 Mike Chandler of the U.S. team puts the ball though the hoop in the Americans&#39; 79-66 loss to Australia. (Michael Abrams / S&S) Australia&#39;s Mitchell Creek, left, goes high to block a shot by Kevin Ware of the U.S. Creek led the Australians with 23 points, while Ware had eight. (Michael Abrams / S&S)

MANNHEIM, Germany &#8211; The downside Thursday night for the American teenagers at the 25th biennial Albert Schweitzer International Youth Basketball Tournament was a 79-66 loss to Australia.

The upside was advancement to today&#8217;s semifinals by the narrowest of margins. After Spain, the team the American&#8217;s defeated 91-81 on Wednesday, downed Croatia 85-60 earlier Thursday, the U.S. knew that under the complicated tiebreaker rules here, it could advance to the semifinals even by losing to Australia by 13 points or fewer.

What looked like a cheap-shot bucket actually proved a blessing, Krystkowiak said.

For the Aussies and Americans to meet again, in Saturday&#8217;s title game, each will have to defeat a German national youth team today. Australia will play the German Under-17 team in a 6 p.m. semifinal at the BFV Sports Arena; the U.S. is to face the Germans&#8217; Under-18 national team at 8 p.m. in the same building.

Australia earned the victory with effort and speed, the Americans said.

Krystkowiak said the Aussies, who out-rebounded the U.S. 51-37 and posted 18 assists to just five for the Americans &#8211;stats that reflect hard work &#8211; are a testimony to the power of determination.

Not that the Americans didn&#8217;t mount any runs of their own. A three-ball by Boatright and two more from Damien Leonard of Greenville, S.C., who finished with 14 points, over a 1:30 span got the Americans even at 49-49 with 5:35 left in the third period. The U.S. extended those treys into a 13-0 run and a 53-49 lead, built as much on the work down low of Chris Manhertz of New York City as it was on treys. Seven of his 12 rebounds, and all four on the offensive glass, and three of his four blocks came when the 6-8 center stepped it up after intermission.

Tonight, the Americans face the same team which defeated them 76-66 in overtime the previous Thursday. Back then, the Americans had been together just four days. Now that&#8217;s up to 12 sunrises, and Manhertz said experience counts.