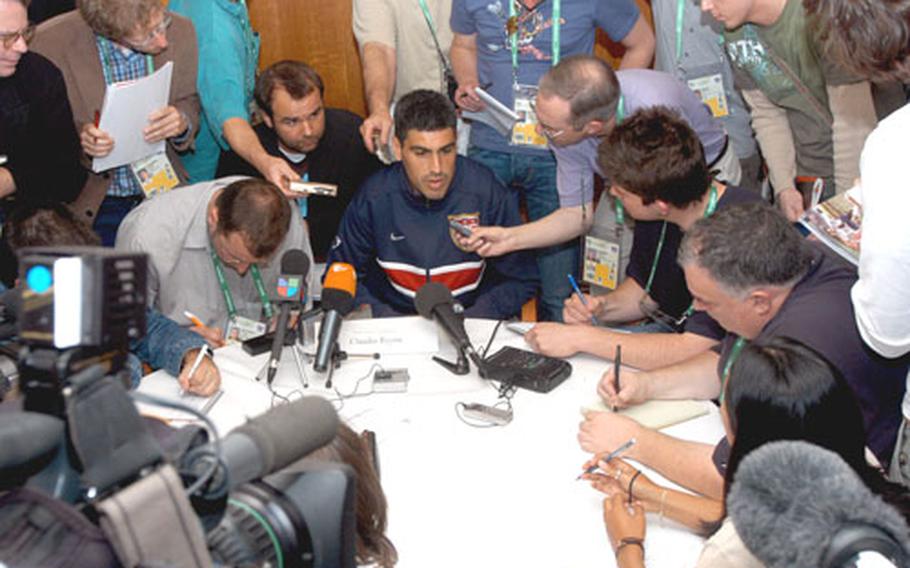 Claudio Reyna, captain of the U.S. men&#39;s soccer team, is besieged by reporters during a press conference Friday at the Park Hyatt Hotel in Hamburg, Germany. (Charlie Coon / S&S)

Like prizefighters waiting to get into the ring, the U.S. men&#8217;s soccer players are strong in the body.

Their first World Cup game is on Monday against the Czech Republic, and the Americans are using the final hours to strengthen their minds.

Fans have been going bonkers in the buildup to the World Cup. Players, though, are meticulously moving in a way that hopefully has them peaking at the right time.

If the United States, one of 32 teams in the tournament, were to reach the July 9 title match, it would be their seventh game in a month. But to get there, they have play well in their three Group E games. Those will decide if they go home or play on.

There are four teams in their group; the Czechs, Italy and Ghana are the others. Only the top two teams advance to the second round.

Eddie Johnson, on whom the U.S. relies to create goals, said he&#8217;s been using the last days to sharpen up. Is he timing his runs correctly? How do his teammates like to receive the ball? Are they communicating well on the field with both words and knowing glances?

The 22-year-old could emerge from the World Cup as the next great U.S. player.

Johnson has been watching the careers of other great strikers, such as Brazil&#8217;s Ronaldo, Ukraine&#8217;s Andrei Shevchenko, and France&#8217;s Thierry Henry. He won&#8217;t compare himself to them, at least not yet.

The Americans know they&#8217;ll be playing a Czech team that features big stars, at least on this side of the Atlantic.

Among them: Goalie Peter Cech, who starts for English super-team Chelsea; speedy Pavel Nedved, the 2003 European Footballer of the Year who plays for Italian power Juventus; and towering striker Jan Koller, who&#8217;s with Dortmund in Germany.

But like the Czechs and the rest, the United States roster was finalized only in mid-May, after the soccer seasons in Europe ended. Only since then have the U.S. players gotten together with regularity.