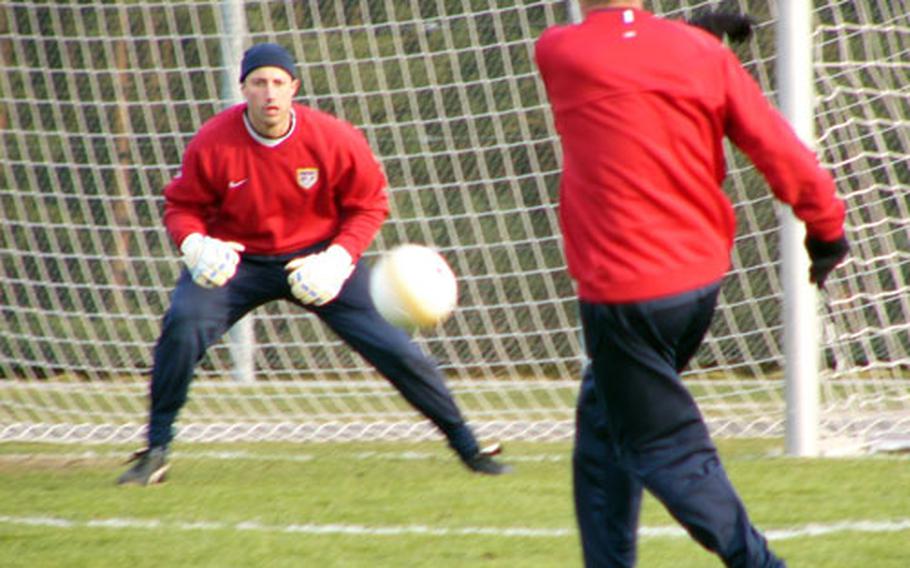 U.S. goalkeeper coach Milutin Soskic (foreground), a member of the Yugoslavia&#39;s World Cup team in 1958 and Olympic team in 1960, warms up Kasey Keller prior to a scrimmage Monday in Eselsfürth, Germany. Keller, who mans the nets for Borussia Mönchengladbach of the German first division, and his U.S.teammates were preparing for Wednesday night&#39;s game against the Polish national team in Kaiserslatuern&#39;s Fritz Walter Stadium. (Rusty Bryan / S&S)

ESELSF&#252;RTH, Germany &#8212; Goalkeeper Kasey Keller said his U.S. national team couldn&#8217;t ask for a better place to play its Wednesday night game against Poland than at Fritz Walter Stadium in nearby Kaiserslautern.

USA Soccer arranged for the game to be played in Kaiserslautern mainly because the Americans play Italy in the same stadium June 17 in first round of the 2006 World Cup. But the appeal of playing in front of thousands of Americans, most who who live in the Kaiserslautern area, wasn&#8217;t lost on the American team.

The U.S. team and the U.S. community have embraced each other like long-lost countrymen. Ramstein played host to a get-together for the team and the community on Monday and was planning a pep rally for Tuesday night.

For their part, the U.S. team visited wounded soldiers at nearby Landstuhl Regional Medical Center.

Arena said Wednesday&#8217;s game against Poland game is intended to give the U.S. team&#8217;s Europe-based players a chance to perform together. He said doesn&#8217;t see himself making World Cup roster decisions based on the game, which kicks off at 8 p.m.

&#8220;This trip is too condensed,&#8221; he said. &#8220;Some of the players flew in today. Some played Saturday and some played Sunday. Some haven&#8217;t played since last Wednesday. Our job is to get each man ready to play in light of that. These players are the property of their clubs, not the national associations, so we have to work with the situation as it is.&#8221;

So how will he know whom to choose at World Cup time?

Count Keller among the players they know best. He&#8217;s allowed fewer than 1.23 goals per game and posted five shutouts in 22 German first-division contests so far this season. Only an injury would keep Keller off Arena&#8217;s final roster.

The game: U.S. vs. Poland is an international &#8220;friendly,&#8221; that is, a game between national teams with (usually) nothing at stake. But the World Cup in Germany begins on June 9, and both the U.S. and Poland qualified. Both teams are busily preparing for the tournament, and final roster spots are at stake.

U.S. background: The Americans used to be an international doormat. But they handily qualified for this year&#8217;s World Cup and are currently ranked No. 7 in the world. An inspiring run to the quarterfinals in the 2002 World Cup rejuvenated a program that finished last in the 1998 tournament. This will be a good chance to feature their Europe-based players, who have been unable to play in recent U.S. friendlies.

Poland background: Currently ranked No. 22 in the world, Poland is in World Cup Group A along with host Germany, Costa Rica and Ecuador. Historically a European contender, Poland is coming off international disappointment, getting bounced in the first round of the 2002 World Cup, and failing to qualify for the 2004 European Cup.

Poland players to watch: Goalie Jerzy Dudek (Liverpool, England) was one of the heroes of last year&#8217;s classic Champions League final, when the Reds overcame a 3-0 halftime deficit to defeat venerable AC Milan, 4-3, in a game that went to penalty kicks.

Tickets/Attendance: Attendance is expected to be light, with only 11,000 tickets sold through Monday. Wednesday is a big night for international friendlies, highlighted by Germany vs. Italy in a game that will likely keep many Germans glued to their TVs instead of at the stadium in Kaiserslautern.

TV: The game will be shown live on AFN-Sports.