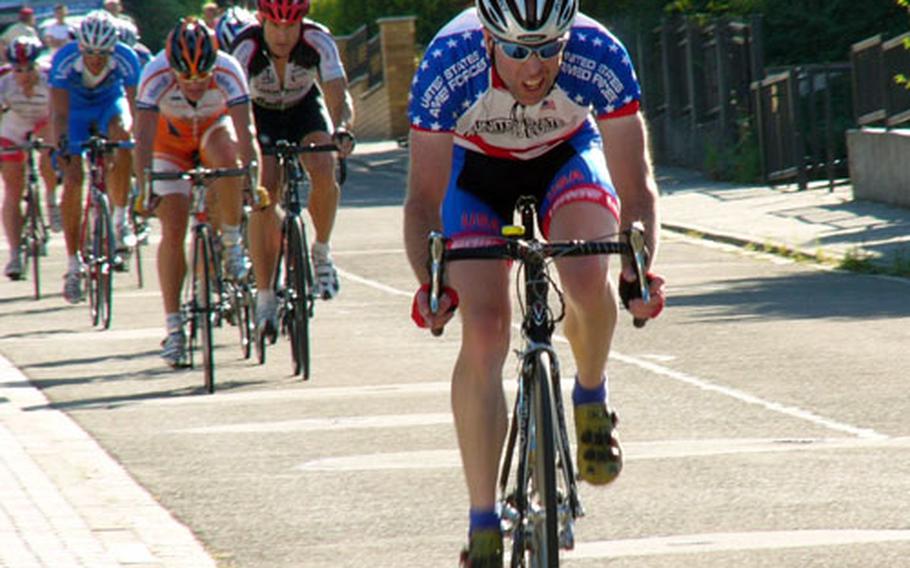 MACKENBACH, Germany &#8212; Thanks to its performance Monday night in a 72-kilometer race in Mackenbacher, the U.S. Armed Forces Cycling Team will ride some momentum into next week&#8217;s International Military Sports Council (CISM) cycling championships, according to coach Klaus Wolf.

&#8220;They rode much more free tonight,&#8221; Wolf said after his team pushed Mike Gallagher to a seventh-place finish in the Mackenbacher Evening Criterium, which took racers around the streets of this bedroom community between Kaiserslautern and Ramstein. &#8220;They should have a lot of self-confidence for CISM.&#8221;

The first event of the CISM championships in Breda, Netherlands, is a time trial on Monday, followed by a road race on July 26.

Gallagher said the weekend events were vital in having the riders become a team.

Like Monday night&#8217;s race of 72 one-kilometer laps, Gallagher said, next week&#8217;s CISM road race also will consist of repetitive circuits, rather than point-to-point.

Wolf said much of the stress next week at CISM will be mental.