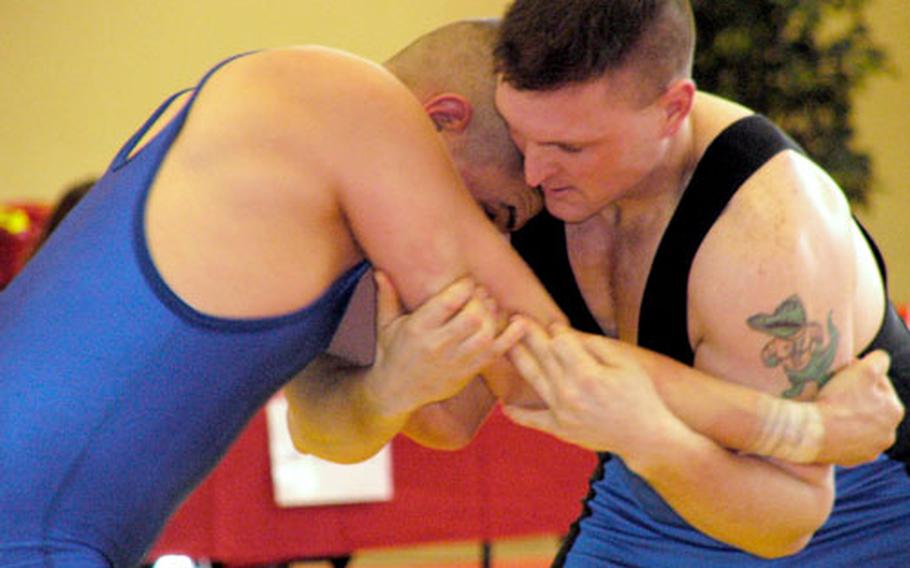 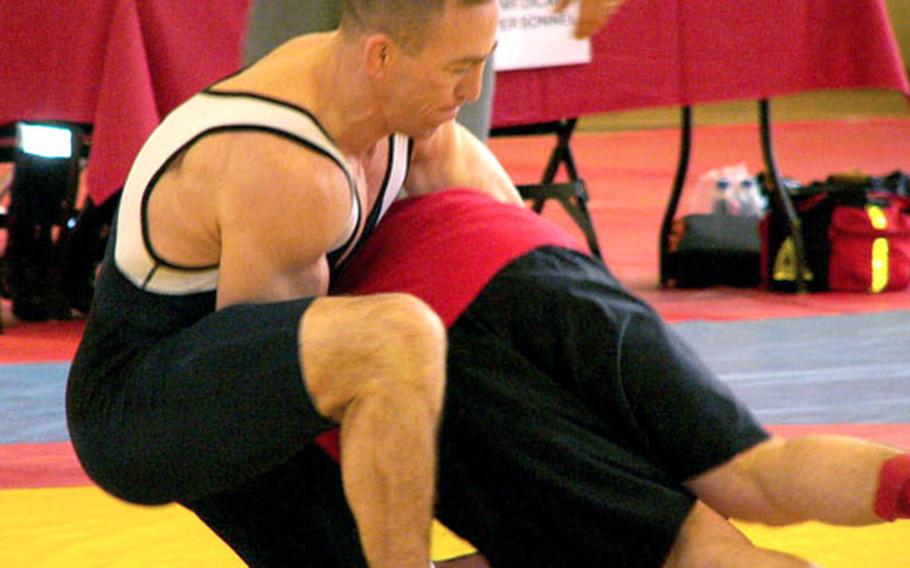 Working from the top in a referee’s-position restart, Steve Horton of Ramstein lifts Seth Williams en route to throwing the Bamberg-based wrestler for a five-point move Saturday in a 163-pound bout. Horton won the match by winning the first two of three scheduled rounds. (Rusty Bryan / S&S)

"I love Greco-Roman," nine-time All-Air Force wrestler Steve Horton, 42, of Ramstein said shortly after he decked Craig Gransbery, 40, of Bamberg in 1:35 of their 163-pound championship match.

Before Saturday, you could hardly call Horton&#8217;s fellow Ramstein wrestler, Matthew DeMitchell, 20, a Greco man. He won the USFE 185-pound Greco-Roman gold medal on his first day of competition in the arms-only style.

"I&#8217;ve never wrestled Greco-Roman before," said DeMitchell, who pinned his two opponents Saturday in 42 seconds each. "I came here and asked them the rules and went out and wrestled."

The answers DeMitchell got to his rules question turned out to be cutting-edge stuff. Saturday&#8217;s matches were the first USFE event to use some newly adopted Greco-Roman rules, according to official Jeff Pellaton.

"Greco-Roman is an acquired taste," Pellaton told spectators about the sport in which participants can neither attack nor defend the legs. "The rules were changed to make the sport more appealing to the spectator."

At least one of the changes could not have appealed more to Horton, who spent seven years in the World Class Athlete program. Among the new rules was an increase in the opportunity for the better wrestler to earn the advantage in a referee&#8217;s-position restart, in which the bottom wrestler starts on his hands and knees and the one with the advantage starts on top.

Horton, who said he placed third last year at 152 in the veteran&#8217;s division Greco-Roman world championships in Russia and who&#8217;ll wrestle at 145 in next month&#8217;s U.S. nationals, used referee&#8217;s-position lifts and throws to win both rounds of his second match, 6-0 and 7-0, against Jeff Williams, 22, of Bamberg. Although it didn&#8217;t come from the referee&#8217;s position, a spectacular throw by Horton won the championship match.

"It was a five-point throw to a fall," said Pellaton, who refereed the title bout. "That&#8217;s the ultimate move. It was perfectly timed."

DeMitchell, who wrestled U.S. rules during high school in Michigan, said he&#8217;s making the switch to the unfamiliar Greco-Roman and freestyle methods of international wrestling on his own.

Sunday&#8217;s freestyle matches begin at 10 a.m. There is no admission charge.