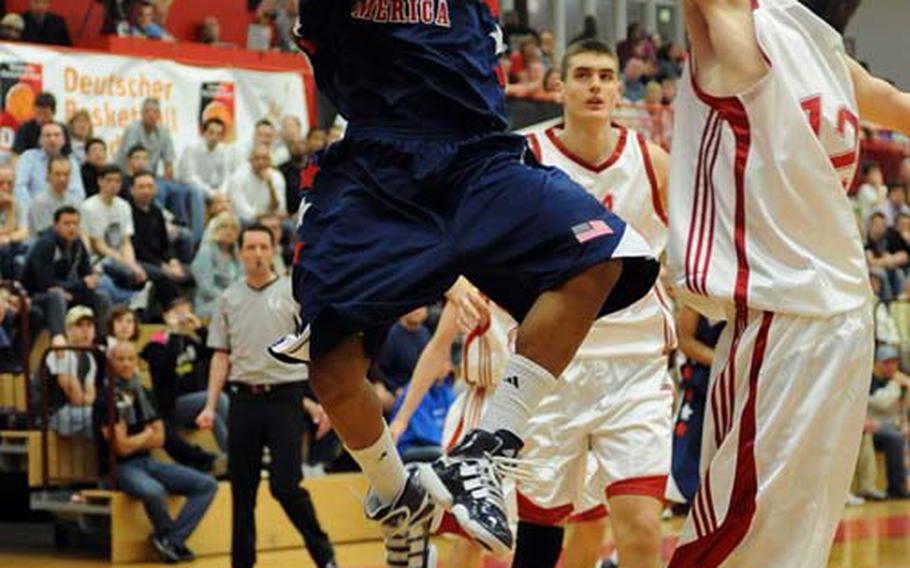 Ryan Boatright of the United States, left, goes to the basket against Croatia&#39;s Marko Ramljak late in the game at the Albert Schweitzer tournament in Mannheim, Germany, Saturday night. The United States beat Croatia 71-69 in their first game of the tourney. (Michael Abrams / S&S)

Ryan Boatright of the United States, left, goes to the basket against Croatia&#39;s Marko Ramljak late in the game at the Albert Schweitzer tournament in Mannheim, Germany, Saturday night. The United States beat Croatia 71-69 in their first game of the tourney. (Michael Abrams / S&S) 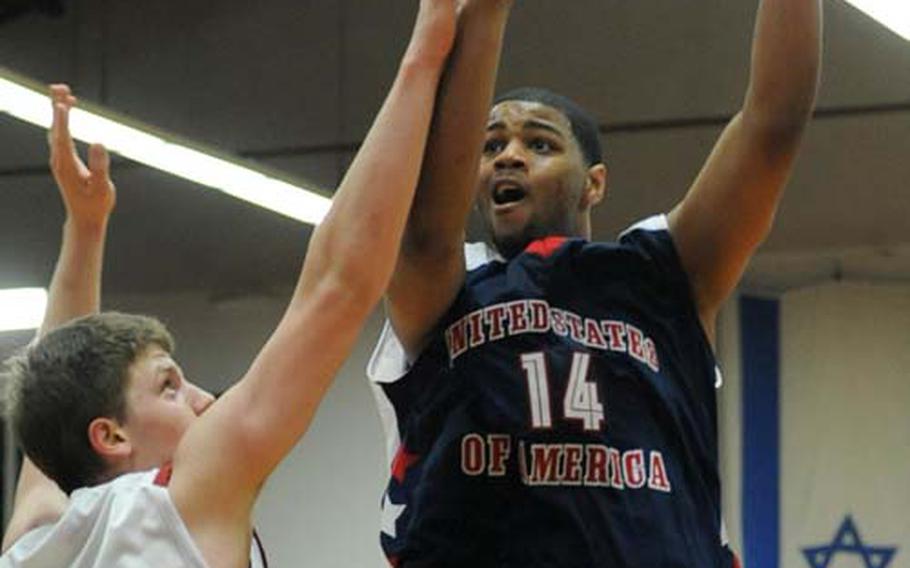 &#8220;I guess we&#8217;re getting used to the calls and the physicality,&#8221; Manhertz said after the Americans were outrebounded more than 2-1 in a 76-66 overtime loss to the German national under-18 team in a Thursday exhibition game. Saturday, the Americans found themselves outrebounded just 46-42 by a team taller than the Germans.

Manhertz wasn&#8217;t alone in stepping up his rebounding. Mike Chandler of Lawrence North High School in Indianapolis and Kevin Ware of Rockville County High School in Georgia each grabbed eight.

&#8220;I was really impressed with the way Kevin got in there and pulled the ball in,&#8221; Krystkowiak said of his 6-0 guard, who had eight defensive rebounds.

The Americans led by 13 points, only to have the lead slip away in the late going. Croatia, which trailed 34-28 at halftime, tied the game at 63 with just under three minutes to go on two free throws by Roko Rogic, the game&#8217;s leading scorer with 19. The shots capped a 9-0 Croatia run, but the U.S. went up 70-63 with 2:08 to play on seven straight points by Ryan Boatright of East Aurora High School of Aurora, Ill. Boatright finished with 12 points, but missed three of four free throws that could have put the game away earlier.

Leading by just three with 5.2 seconds to play, the Americans fouled Marko Ramljac on a three-point attempt that wasn&#8217;t close. Ramljac converted the first two free throws to cut his team&#8217;s deficit to 70-69, but missed the third. Leonard grabbed the rebound and was fouled so quickly that inexplicably no time ran off the clock.

Leonard converted the second of two free throws, and this time the clock operator found the button when Croatia inbounded. Time expired as Rogic launched a brick as he was fumbling the ball at the top of the key.

Next for the Americans is pool game No. 2, against the national junior team of France. It&#8217;s to tip off at 8 p.m. today at the BFV Sports Arena. Tickets priced at seven euros for adults are available at the door. The U.S. closes its pool schedule at 8 p.m. Monday against Argentina.