Two from Okinawa Athletes of the Year 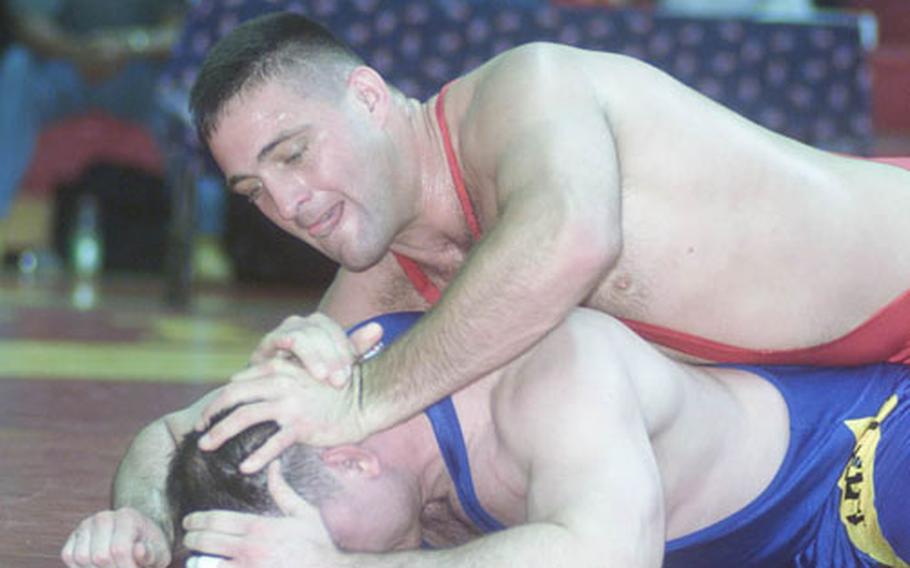 All-Marine wrestler Dan Hicks works to try to turn All-Army wrestler Franklin Lashley during a freestyle match in the 2002 Armed Forces Wrestling Championship. Hicks won two gold medals for his wrestling, one in freestyle wrestling and one in Greco-Roman wrestling. ()

All-Air Force softball player Tony Patrick is transferring from the 18th Munitions Squadron at Kadena Air Base on Okinawa to Aviano Air Base in Italy later this month.

&#8220;I think they&#8217;ve got the wrong guy,&#8221; said Patrick, half-jokingly, about being honored during the U.S. Military Sports Association&#8217;s Pride of the Nation ceremonies March 28 at the Crystal Gateway Marriott in Washington.

Joining him will be Dan Hicks of Okinawa&#8217;s Camp Hansen, a freestyle and Greco-Roman wrestler who was selected Marine Corps&#8217; male Athlete of the Year, giving Okinawa two of the USMSA&#8217;s 10 Athlete of the Year selections.

Hicks also picked up the distinction in 1996, when the six-time All-Marine and four-time U.S. National team member was an alternate on the 1996 U.S. Olympic team.

Patrick, 28, a tech sergeant-select from Klamath Falls, Ore., helped the Air Force win the All-Armed Forces softball tournament title with a come-from-behind 36-35, eight-inning victory over the Marines. The Air Force trailed 22-3 in the fourth inning of the gold-medal game.

That was the highlight of the 2002 campaign, said the four-time All-Air Force standout who had watched the Marines win the tournament in 2000 and the Army take it the next year.

Besides his Armed Forces diamond exploits, Patrick led his local Okinawa team, Pacific Force, to three of the four Pacific Grand Slam tournament titles this year, giving the team 36 of the last 55 dating back to 1989.

Hicks&#8217; honor comes after having sat out competitive wrestling during 2001, partly to help his body heal, but more so because he felt his best days were behind him. After being an Olympic alternate in 1996, he failed to make the team for the 2000 Summer Games in Sydney, Australia.