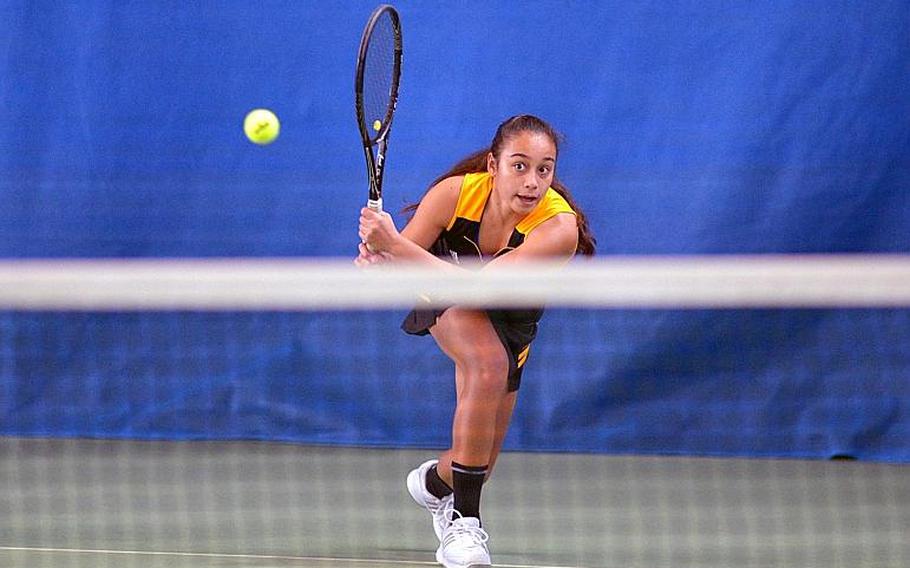 Marissa Encarnacion of Stuttgart watches her ball fly across the net in her 6-0, 6-0 first-round win over Lakenheath's Marisa Peredo in this year's DODDS-Europe championship. She went on to win her second title. (Michael Abrams/Stars and Stripes)

Aside from how they ended, the two championship runs turned in by Marissa Encarnacion over the last two seasons could not have been more different.

In 2014, Encarnacion was a sophomore for the Patch Panthers. Her season had been devastated by a broken foot, leaving her on the sidelines and in a cast. She came back in time to earn a wild-card entry into the European tennis championship tournament, and took advantage of the opportunity to reach the finals. There she beat teammate and close friend Marina Fortun 6-1, 6-1 in a match she would have been happy to lose, the friends’ goal of finishing first and second already achieved.

In 2015, Encarnacion was a junior for the Stuttgart Panthers. She spent the season healthy and in peak form, cruising through the fall undefeated and largely unchallenged. She entered the European championship tournament as its defending champion and top seed, and coasted into the finals. There she confronted and conquered one of the toughest opponents of her young career, Anouchka Laurent Josi of International School of Brussels, in a tense, hard-fought 4-6, 6-1, 7-6 win.

As different as they were, both paths led to a championship for Encarnacion. And both led to her being named the Stars and Stripes girls tennis Athlete of the Year.

“This one for me personally is better,” Encarnacion said of her 2015 title. “It means more to me as a person.”

If progress stems from struggle, then that classic match against Josi offered a season’s worth of growth and development, forcing several strategic adjustments from each player as they traded the opening sets and engaged in an epic final set that finally declared a victor.

“Definitely one of the best players that I’ve ever played against,” Encarnacion said of Josi. “I felt like I had to adapt to the way that she played because all my previous matches, the pace was different.

“It was just an amazing match and it could have gone either way.”

But the match only went one way – in Encarnacion’s favor.