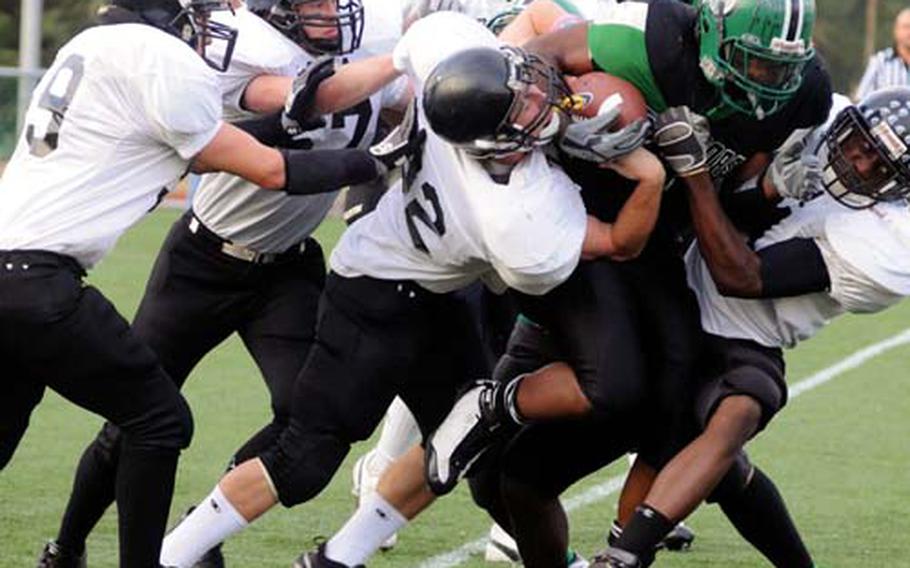 Spencer set Far East playoff records for carries (45), yards (312) and touchdowns (4), and Michael Jorgenson sneaked for three TDs as the Trojans rallied from a 38-28 second-quarter deficit to beatDaegu American 46-38 on Saturday to secure its first Class A football title banner.

Zama&#8217;s boys had not won an outright Far East title in any sport since wrestling in 1979; wrestling shared the 1982 title. DODEA Japan won the Class A title game for the fourth straight year. DODEA Japan champion Zama finished 7-2 and DODEA Korea champ Daegu 6-2.

Zama regained the mojo that helped the Trojans pound opponents to the tune of 7.04 yards per carry in the first four games, only to regress to 3.45 in the next three. The Trojans gained 451 yards on 75 carries Saturday, 6.01 yards per carry.

Leading the way was Spencer, who fueled a Zama attack that outgunned Daegu 562 yards to 414. Spencer finished the season with a school-record 1,154 yards on 172 carries with 12 touchdowns.

Merrell also credited the Trojans defense for stiffening in the second half. Torched by Daegu quarterback Tre Griffin for 260 first-half yards and four TDs, three by Martinez, Zama buckled down and held Griffin to 93 second-half yards and no points, and forced one fumble that led to Zama&#8217;s final TD.

"We might have pressured the quarterback more. The defensive backs were in the right position. They (Daegu) turned the ball over and we were fortunate to get that," Merrell said.

Daegu coach Ken Walter felt his play selection in the final two quarters, plus losing center Angel Griego with a broken hand early in the third quarter, hurt the Warriors.

"I don&#8217;t think I did a good job of calling plays in the second half," he said. "They (Zama) made some good adjustments. We had seven or eight players going both ways. Griego broke his hand and we had to switch centers."

In the end, Walter said, the day belonged to Spencer. "He&#8217;s an amazing athlete, hard to bring down, low center of gravity and he keeps his legs moving," Walter said.

Martinez promptly answered with an 84-yard kick-return touchdown five minutes into the contest, but Spencer fired back with a 69-yard TD scamper. Antoine Feagin&#8217;s 1-yard run put Daegu back in front 16-14 just before the first period ended.

Josh Gosserand&#8217;s leaping 12-yard touchdown catch a minute into the second period made it 24-14. Spencer cut that to 24-22 with a 1-yard run, then Griffin hit Martinez for TD strikes of 66 and 63 yards, which Zama answered with short scoring runs by Spencer and Jorgenson.

The defenses finally took hold in a scoreless third period, then Zama went ahead to stay 40-38 with 10:12 left on Jorgenson&#8217;s 2-yard TD sneak. Malcolm Franklin promptly recovered a Daegu fumble, and seven plays later Jorgenson sneaked in again to cap the scoring.

Daegu had two more shots to tie it but got as far as the 22 with 4:53 left before turning it over on downs. A last-ditch pass to the end zone as time ran out fell incomplete, triggering Zama&#8217;s celebration.

Merrell had not planned on coaching the Trojans for a third season and indeed had to be talked into returning by athletics director Ed Fogell. "It worked out well," Merrell said.