Tough competition, but no repeats 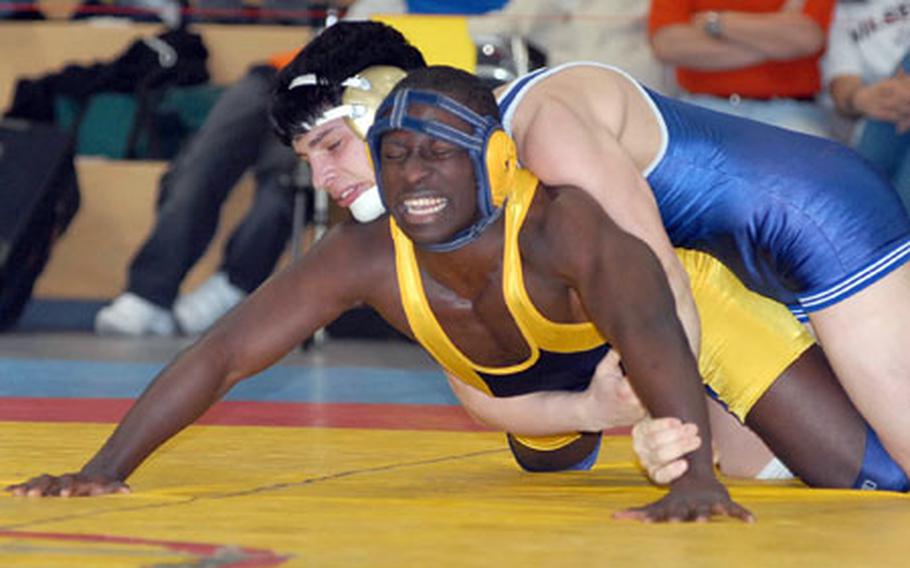 Spenser, from Wiesbaden, downed Chris Campos of Naples 6-3 in Saturday morning&#8217;s semifinals, then claimed a gutsy 2-0 victory over James Ricks of Patch in the championship bout.

Spenser was one of eight wrestlers to wrap up unbeaten seasons here, but was lost in the pre-tournament shuffle despite his glittering record. Campos was also unbeaten until Saturday.

Vogt played a part in another championship, according to 140-pound king Shane Hinton of Vicenza.

Also striking late for a victory was Bitburg&#8217;s unbeaten Jerry Arculeta at 103. He took Ty Yocum of Kaiserslautern down with 22 seconds left to win 5-3.

Baumholder went home with two individual titles, both by fall. Edgar Acosta caught Taji Peebles of Wiesbaden trying to stand and turn into him after a takedown and jammed home a body lock that put Peebles on his back at the 1:39 mark.

Baumholder&#8217;s David Crow, whose seven pins during the two-day event tied him for most with 160-pound champion Eric Vandal of Hohenfels, collected his seventh by locking in a half nelson on Nick Rogers of Patch with 25 seconds left.

&#8220;I was waiting patiently to get my arm in all match,&#8221; Crow said after wrapping up his unbeaten season.

Despite the Bucs&#8217; champions, AFNORTH took the D-II crown 114-102 behind most valuable wrestler Kris Higgins, the unbeaten 130-pound king, and Brock Blankenship, who rebounded from a 13-11 loss in Saturday morning&#8217;s final round-robin match against K.C. Brown of Giessen at 171 to pin Brown in 2:43 of the title match.

Higgins, voted MVP, completed his unbeaten run with a cradle on previously unbeaten Andrew Moon of Heidelberg. The resulting takedown and near-fall points produced a 10-6 victory.

Also going unbeaten for the season was 145-pound champion Jon Peden of Ramstein, who struggled to a 3-1 decision over Ronald Peebles of Wiesbaden, whom he had pinned in 22 seconds the day before.

Peebles battled as if that never happened, holding a gasping Peden to the narrow win.

Vandal of Hohenfels collected his seventh fall of the tournament in 1:27 over Steven Ponte of Wiesbaden at 160. Vandal, a senior, plans to wrestle with a German club to prepare for a college career after leading Hohenfels to a 40-point victory over Vicenza in the D-III race. Brussels outgunned Alconbury for the D-IV crown.

Also turning his attention to a German club is 285-pound king Sasha Chavez of Kaiserslatuern, who gutted out a 5-4 victory over Evan Watson of Wiesbaden. Chavez hopes to wrestle for the Mexican national team.

Vandal was the second champion from Hohenfels. He followed Dameon Odum&#8217;s 11-7 revenge victory over Jeremiah Raveling of Ramstein in the 152-pound finale. Raveling pinned Odum in Friday&#8217;s round-robin.

Corey Targos flattened Brian Taylor of Patch with a body press at the 1:58 mark, and Eric Oyan decked William Domko of Heidelberg with a cradle in 1:17 of their 215-pound match.

Oyan, a senior, plans to give up wrestling.