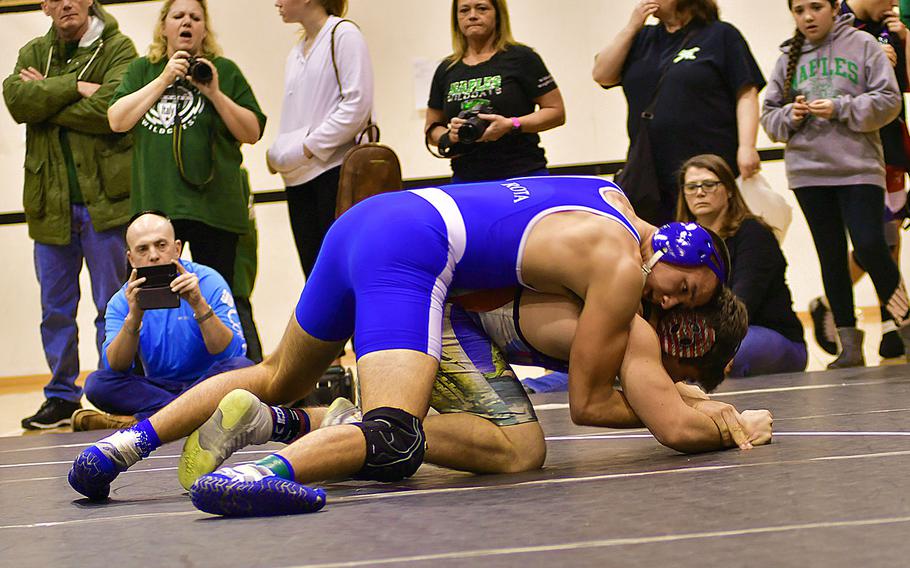 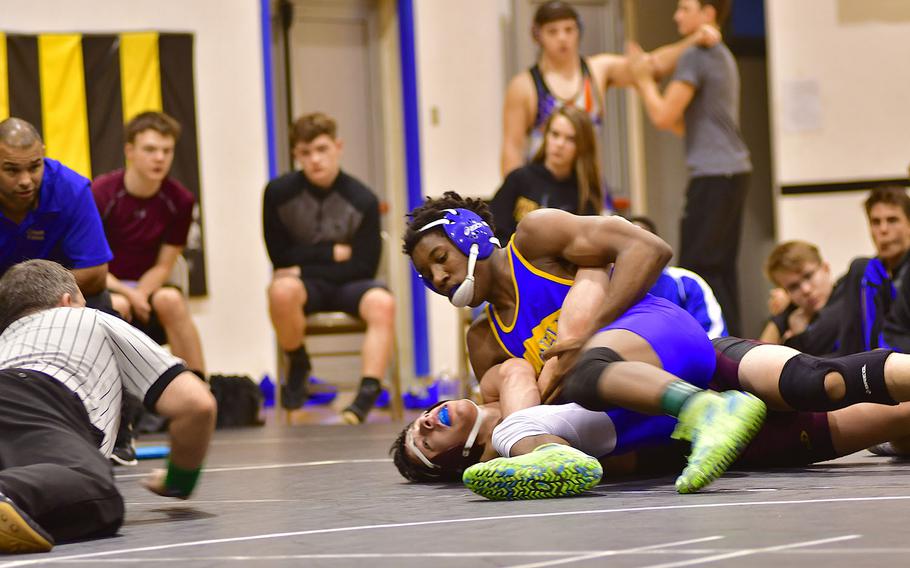 Sigonella's Amari Pyatt attempts to pin Phoenix Blumenshine of Vilseck. Pyatt was expected to easily advance to the European Championship and did so with a sweep in the 170-pound bracket. (Norman Llamas/Stars and Stripes) 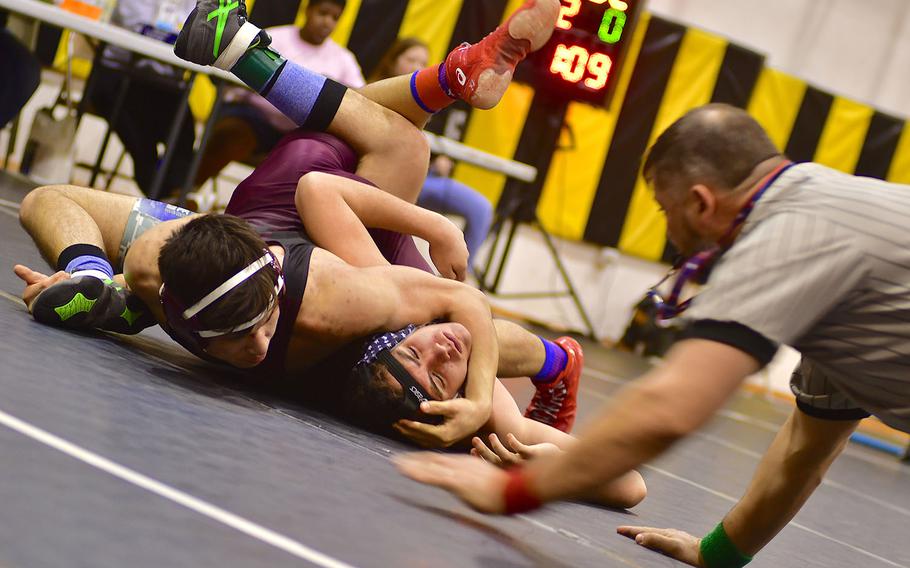 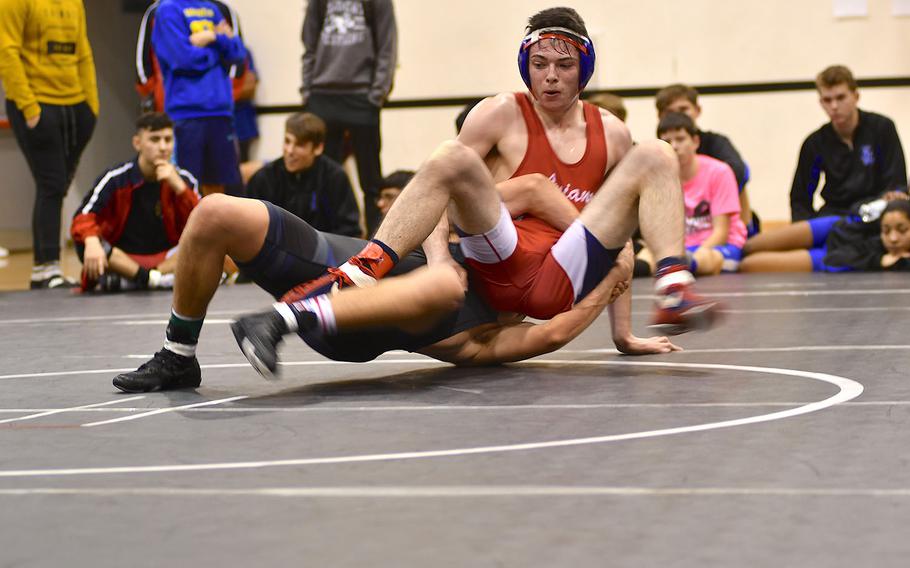 Aviano's Michael Hauser tries to escape a take down. Hauser defeated Roberts Swart from Ankara in the 145-pound bracket of the Southern wrestling sectionals that took place at Vicenza, Italy. (Norman Llamas/Stars and Stripes) 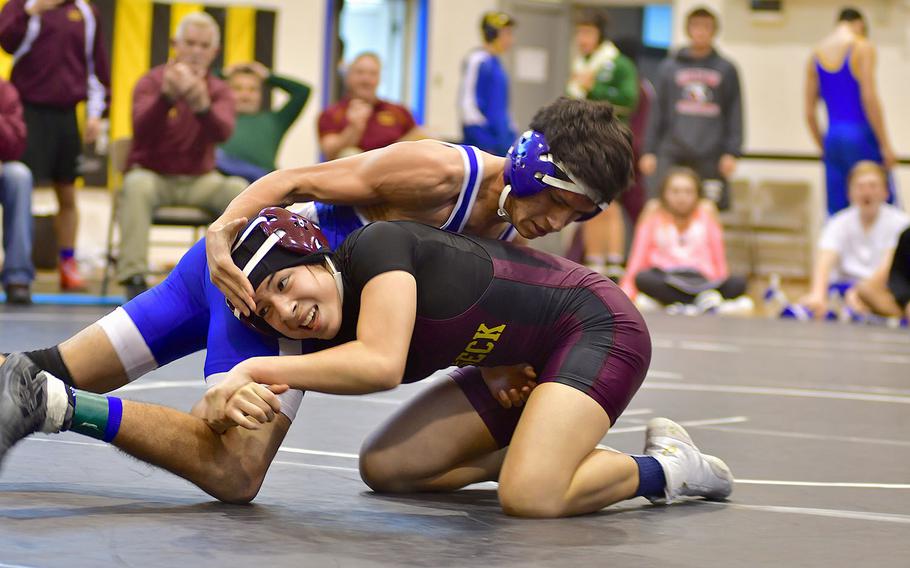 VICENZA, Italy – For the most part, coaches and wrestlers had a pretty good idea who the top wrestler in each of the 14 weight brackets was going into the Southern Section Qualifier on Saturday.

The rest of the field was pretty much up for grabs.

“In wrestling, anything can happen, any given day,” Aviano coach Robin Clement said. “I have a young team so, I knew coming into the season we weren’t going to win the championship.”

Aviano did have something to cheer about. Two wrestlers ended up taking first in their respective brackets: Ethan Herrera in the 113-pound bracket and Michael Hauser at 145.

Hauser beat Ankara’s lone wrestler, Roberts Swart, a junior from one of DODEA’s smallest schools and originally from South Africa. The match was one of the few that the entire gym turned their undivided attention to, as they cheered on both wrestlers.

Despite the second-place finish, Swart did advance to the finals. It is likely that he will end up facing Hauser yet again at the championships next weekend in Wiesbaden, Germany.

“If I win my next match, I’m going to the championship,” Swart said after winning his first match. He did and did.

One wrestler that seemingly everyone knew was going to advance with ease was Sigonella’s Amari Pyatt. The transfer from Nebraska has truly dominated his matches since the start of the season.

Estes was pretty close in his prediction. At the end of the day, seven wrestlers from Sigonella placed in the top four. Depending on how many wrestlers were in each weight class, the top one, two or three placers advanced automatically. Others could be selected as wild-card entries.

Among the matches that drew the most attention were ones involving Vilseck 126-pounder Jada Llamido. From the moment she took on her first opponent, the crowd was clearly on her side.

“The season went well and today really met our expectations,” Coach Jim Hall said. “Our wrestlers won four out of five championship matches. We are looking forward to the finals. We plan on having at least 12 wrestlers in the finals.”

Like Vilseck, Naples is also looking to turn some heads.

“For us, things went well today,” Vito Vitulli, Naples coach, said. “I think we have a nice group going to the European championship. We will probably have 10 wrestlers going.”

Reigning Division I dynasty Stuttgart not only hosted the central region’s qualifier but also thoroughly dominated it. The Panthers pushed through 17 automatic qualifiers, including at least one in 13 of the 14 weight classes. Stuttgart grapplers took first place in nine weight classes.

That showing gives the Panthers a solid base from which to pursue a sixth consecutive Division I European team championship. But the team that figures to be their toughest obstacle, the Ramstein Royals, enjoyed an even stronger Saturday.

Ramstein dominated the northern sectional at Brussels, qualifying 25 wrestlers for the European finals. At least one Royal advanced out of all 14 weight classes, and 11 weight classes saw two Ramstein wrestlers advance.

While Ramstein has the edge as of now, those numbers will change early this week as DODEA-Europe officials fill out the European championship brackets with wild-card selections, which should include another healthy haul of Panthers and Royals.

Lakenheath and SHAPE, the other two Division I schools present at Brussels alongside Ramstein, each earned five automatic European bids.

Reporter Gregory Broome in Kaiserslautern, Germany, contributed to this article.