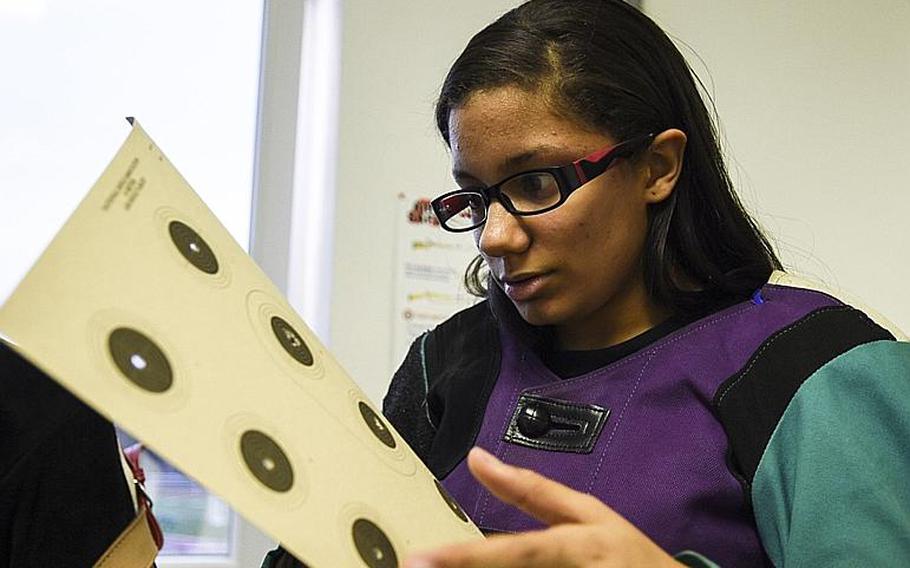 The Stuttgart Panthers have dominated DODDS-Europe marksmanship so thoroughly over the last two seasons that their second tier of shooters, if allowed, likely would have finished behind only the program’s top flight in the European finals.

In a way, they’ll get the chance to prove that this winter.

With the Panthers’ established champions having graduated or otherwise moved on, an entirely new group of shooters will accept the burden of continuing the title reign of the program known until this year as Patch.

The new top five is comprised entirely of sophomores, and tenured coach Raul Pinon said he’s expecting the group to capably fill the sizeable footprint of the team that preceded it.

“Our current team is just as strong as it was last year,” Pinon said.

Co-captains Kaila Jones and Fallon Dickinson headline the new Panthers, joined in the top five by Eileen Dickinson, Callum Funk and Macy Kimball. All five, Pinon said, are routinely shooting above 280 out of a possible 300 points in the DODDS-Europe scoring system.

As per usual in Stuttgart, there’s plenty of depth on hand to keep the top flight honest. Pinon said the sixth competitive spot will be determined on a “continuous evaluation on a weekly basis,” drawing from a roster numbering in the double digits.

“Shooters compete every week for that spot on the firing line,” Pinon said.

Once there, they’ll find plenty of competition from other DODDS-Europe schools eager to disrupt the Panthers’ burgeoning dynasty.

Ansbach, Hohenfels and Vilseck, each accomplished programs from the sport’s hotbed of Bavaria, rounded out the top five at last year’s title meet. Returnee Victoria Banister leads a freshman-heavy Vilseck program that joined Stuttgart and Kaiserslautern in cracking the 1,400-point mark at last year’s tournament.

In the north, Alconbury will look to continue its steady rise into contention behind returning junior ace Brittany Brann.

The five-week regular season begins Saturday at Wiesbaden and Ansbach. Stuttgart will host the European finals on Jan. 30.