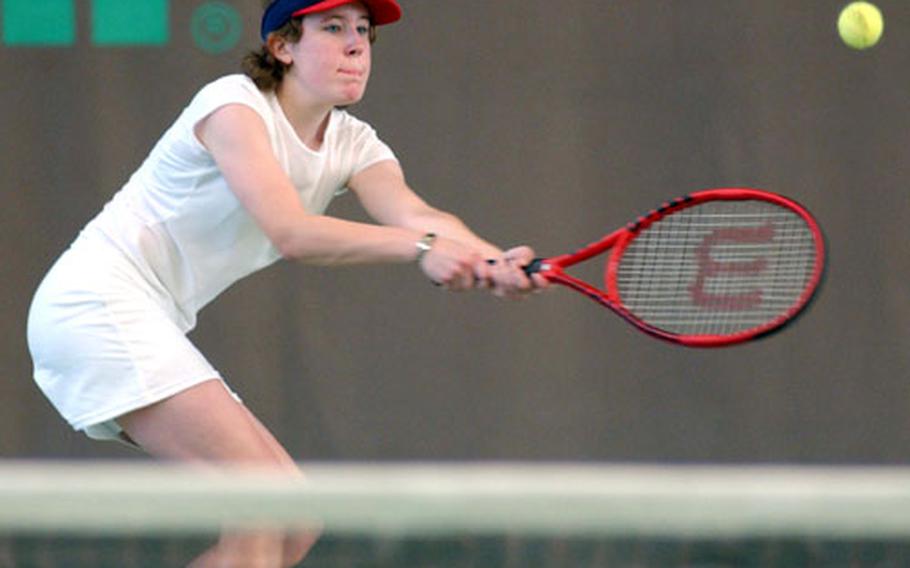 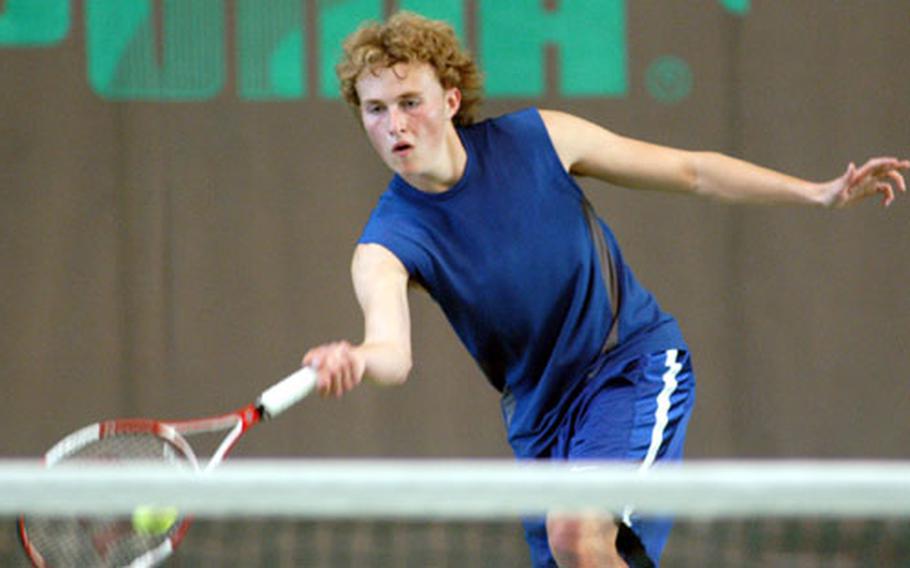 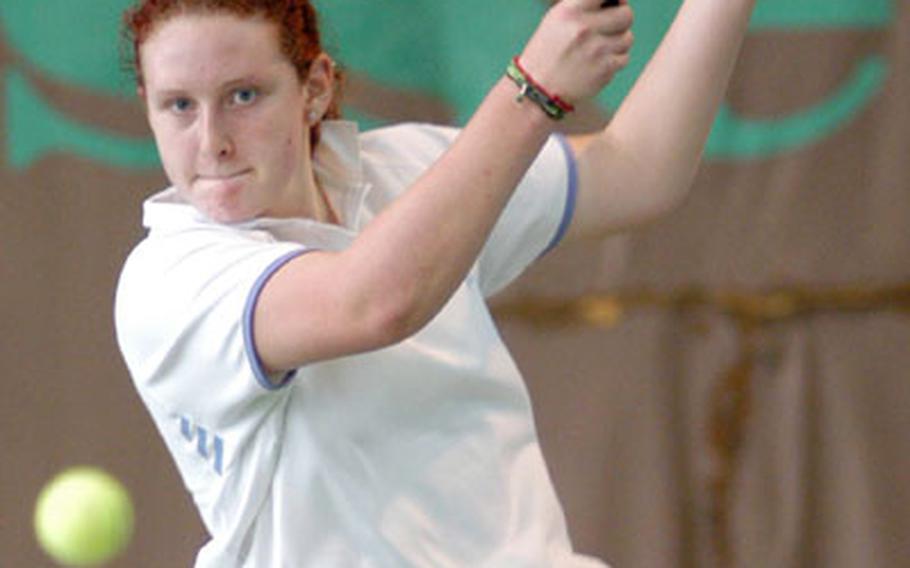 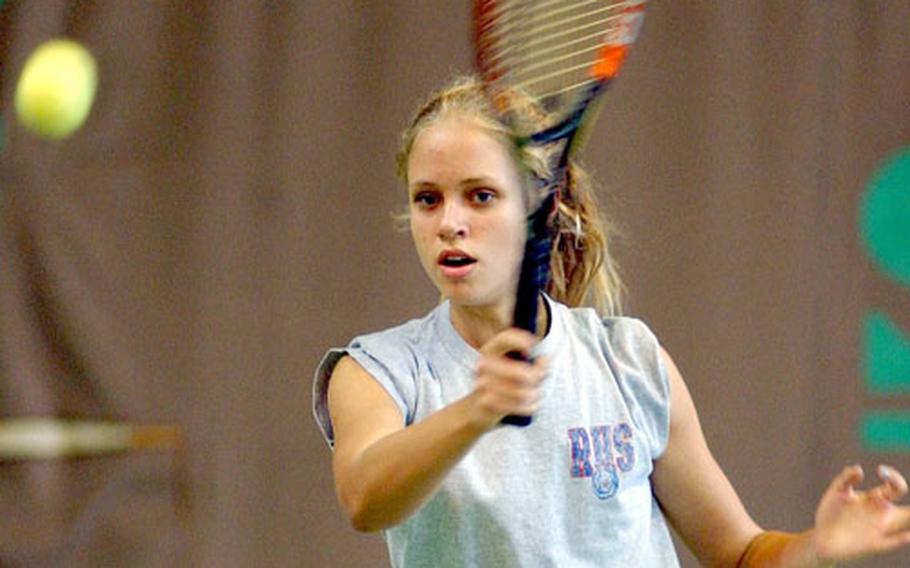 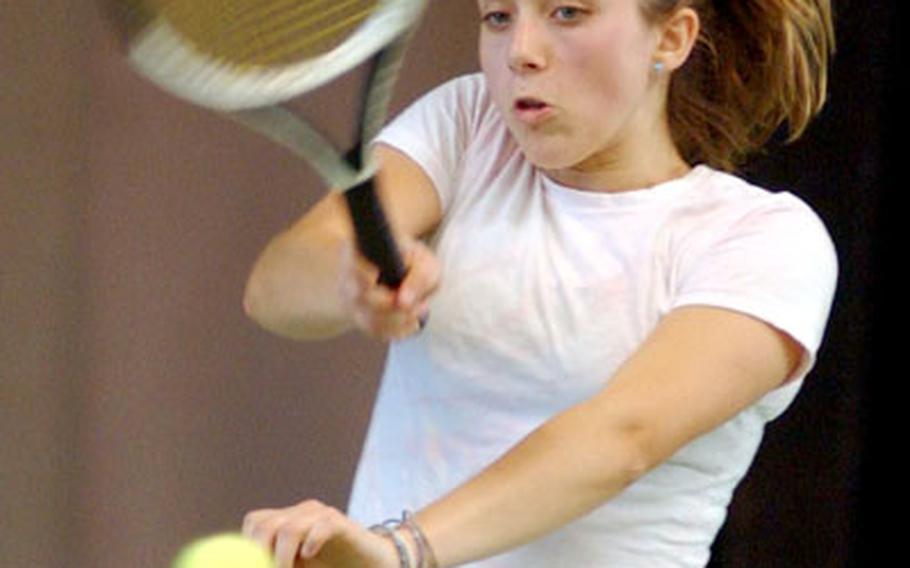 WIESBADEN-NORDENSTADT, Germany &#8212; As the only American with a chance to win a singles title Saturday in the DODDS-Europe tennis championships, Michael Sanchez of Heidelberg isn&#8217;t fazed by having to carry the flag in his first final.

&#8220;I&#8217;m trying to concentrate on playing my best,&#8221; the second-seeded Sanchez said Friday after dropping only three games while winning four sets.

Sanchez, a senior, defeated Wiesbaden&#8217;s Patrick Barrenechea in the quarterfinals, 6-0, 6-1, then routed third-seeded Roy Forberg, the Mediterranean champion from American Overseas School of Rome, 6-0, 6-2 in the semifinals.

Sanchez will face top-seeded Claudio Giraldi, a SHAPE sophomore, in the final. Like Sanchez, Giraldi cruised Friday, thumping Alex Taylor of Patch 6-2, 6-1 in the quarterfinals and dispatching fifth-seed John Pendergrass of Bitburg 6-2, 6-2 in the semis.

Sanchez has never faced Giraldi, who&#8217;s in his first season at SHAPE.

The finalists in the girls&#8217; singles title match Saturday had an even easier time than the boys.

Top-seeded Krista Citovska, another SHAPE newcomer, coasted into the finals at love over Jemela McKinzy of Wiesbaden in the quarters and fourth-seeded Jennica Botonis of Bitburg in the semis.

American players fared better in doubles. Lakenheath&#8217;s top-seeded duo of Phil Burroughs and John Keenan dropped the first set of the semifinals to Alconbury&#8217;s Christian Felice and Max Reuning before rallying for a 4-6, 6-2, 6-2 victory.

Burroughs and Keenas are to square off against Heidelberg&#8217;s second-seeded duo, Blair Martin and Sam Pohl, in Saturday&#8217;s final. Martin and Pohl won their quarterfinal and semifinal matches in straight sets, although they were taken to a tiebreaker by Vilseck&#8217;s Chad Perkins and Byron Schaffer in the quarters.

In girls doubles, ISB&#8217;s top-seeded duo of Yuna Shibata and Izumi Takeuchi reached the final with a 6-1, 6-4 conquest of Bitburg&#8217;s fourth-seeded Ashley Fary and Jackie Ventrice. They will take on the third-seeded duo of Maggie Curry and Megan Jones of Ramstein. Curry and Jones stopped the upset run by Kaiserslautern&#8217;s unseeded duo of Abby Halpin and Jessica Gofourth 6-2, 6-1. Halpin and Goforth were coming off a 6-3, 6-3 upset of the No. 2 team, Paulina Ryan and Molly King of Heidelberg.