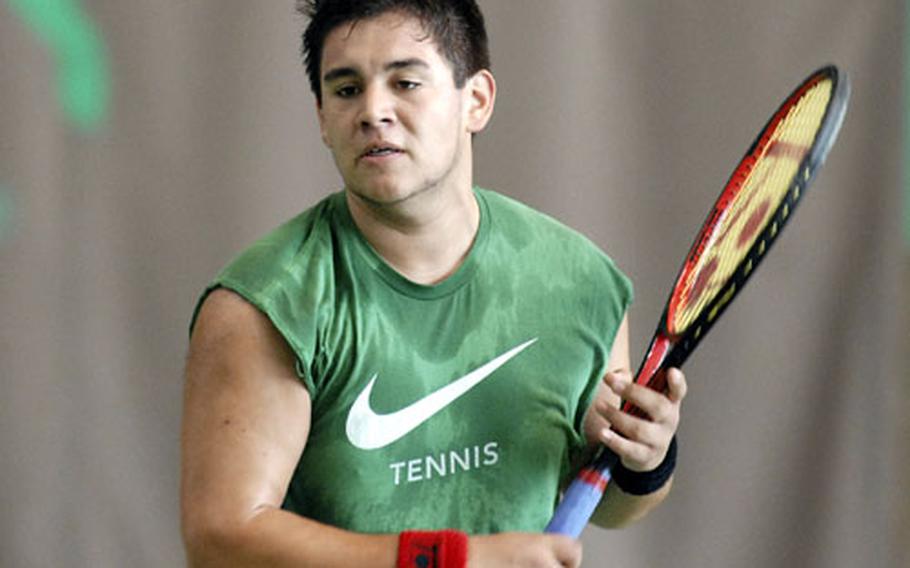 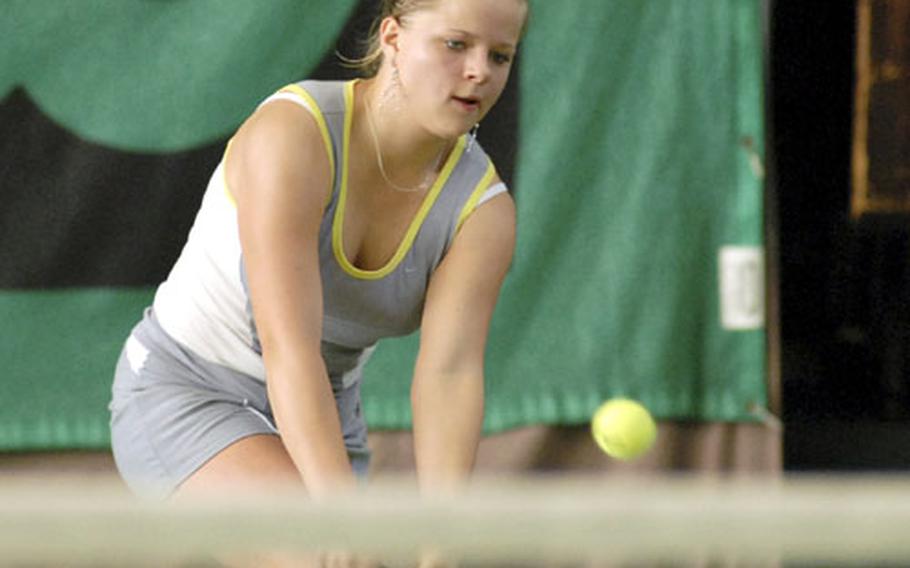 Defending girls champion Krista Citkovska of SHAPE advanced to this year’s final with a 6-0, 6-0 victory in the semifinals over Heidelberg’s Chelsea Cotter. (Michael Abrams / S&S) 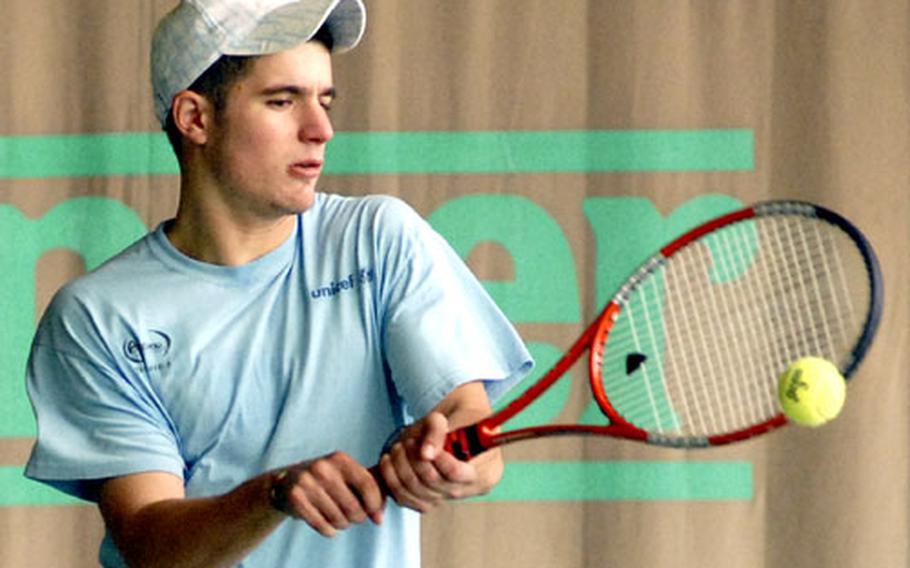 Europe boys defending champ and No, 2 seed Claudio Giraldi of SHAPE returns a shot from sixth-seeded Ryan Umstaedter, in their semifinal match on Friday. Giraldi will face top seed Nick Garcia of Heidelberg in the championship match on Saturday. (Michael Abrams / S&S) 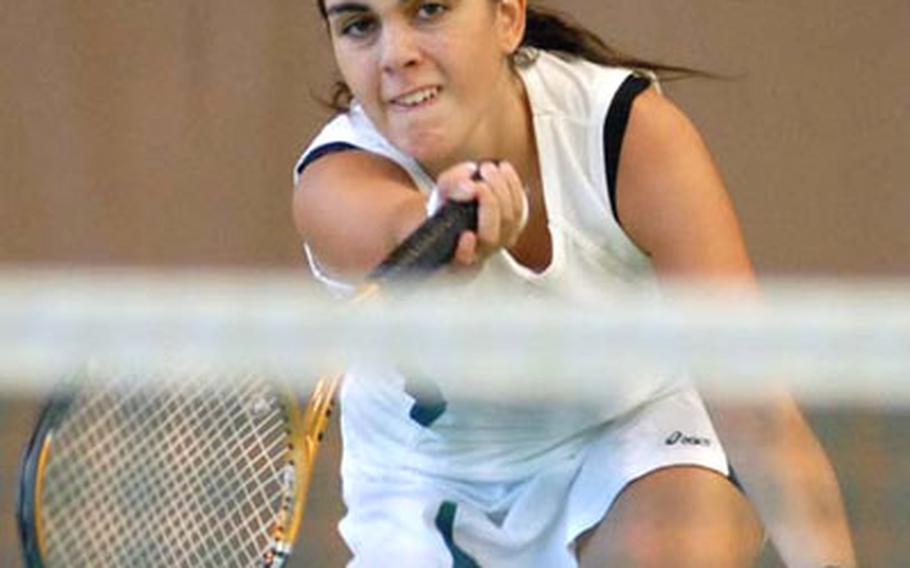 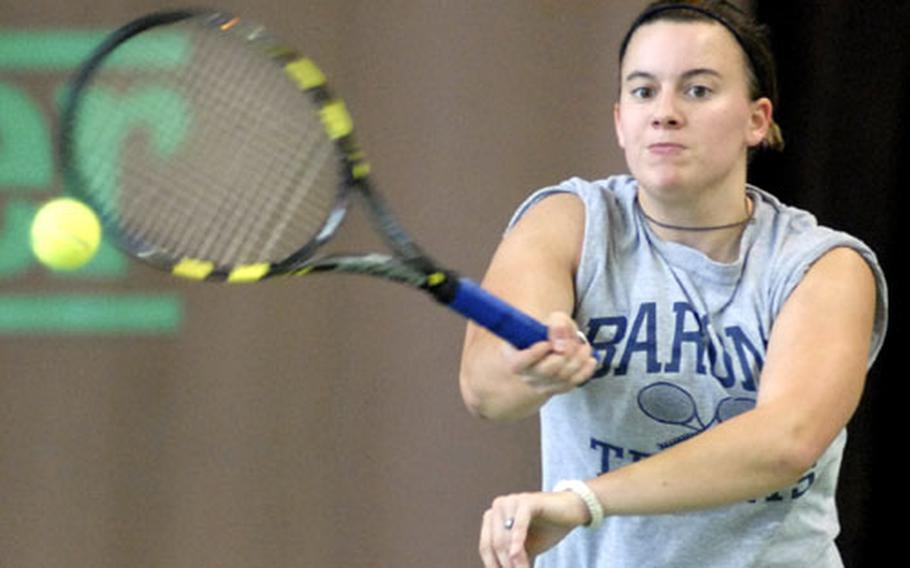 WIESBADEN-NORDENSTADT, Germany &#8212; The first No. 1 seeds to fall in the 2006 DODDS-Europe high school tennis championships were knocked out Friday.

Heidelberg&#8217;s Sam Pohl and Blair Martin, the defending boys doubles champions but seeded fourth this year, knocked off top-seeded Matt Puchta and Shawn Kelley of Ramstein 6-3, 6-1 in the semifinals of the three-day event that ends Saturday at the Vitis Tennis Center just outside this Wiesbaden suburb.

Pohl and Martin, who haven&#8217;t lost a set in the tournament, were seeded No. 4 because they had played only one doubles match together this season.

Pohl needed a wild card because he&#8217;s on the same team as top-seeded Nick Garcia, who has been unbeatable this season.

Pohl and Martin, who defeated the No. 5 seeds from International School of Brussels 6-0, 6-2 in Friday morning&#8217;s quarterfinals, said they had little trouble re-establishing the links that led them to the 2005 title.

Martin and Pohl said their low seeding made the road to the final more difficult.

When Martin and Pohl take on Kaiserslautern&#8217;s duo of Devin Smith and Chris Lucynski in Saturday&#8217;s final, they believe they&#8217;ll be helped by their winning experience last year.

In boys singles, Garcia set up a finals showdown on Saturday against defending champion Claudio Giraldi of SHAPE.

[/BODY]In the girls doubles, top-seeded Jackie Ventrice and Lindsey Jones of Ramstein needed two tiebreakers to eliminate the No. 4 seeds from International School of Brussels, Lidia Valdes and Natsuko Matsui.

Ventrice and Jones will take on the No. 2 duo of Katie Foxworth and Nancy Jensen, who finished third here last year, in the final.

Top-seeded Krista Citkovska of SHAPE continued her drive toward a second straight singles crown. She won her quarterfinal and semifinal matches at love, and hasn&#8217;t dropped a game this season. Her final opponent, second-seeded Jennica Botonis of Bitburg, on Friday had to get by her second surprise opponent from Italy in this tournament.

Unseeded Vittoria Musotto of Milan stunned No. 3 Allison Luthman of Ramstein 7-6 (7-4), 2-6, 6-4 in Friday&#8217;s quarterfinals, then downed the unbeaten Botonis 7-6 (9-7) in the first set of their semifinal. However, Botonis, who also lost a tiebreaker to Maria La Via of American Overseas School of Rome on Thursday, roared back to win the final two sets 6-0, 6-2.

Top seeded Nick Garcia of Heidelberg (above) reached the boys final with a 6-0, 6-1 victory over Ramstein&#8217;s Sean Stokstad.

Bitburg&#8217;s Jennica Botonis slams a return to Milan&#8217;s Vittoria Musotto during a 6-7 (7-9), 6-0, 6-2 semifinal victory that put her in Saturday&#8217;s championship match against defending champ Krista Citkovska of SHAPE.

Defending girls champion Krista Citkovska of SHAPE advanced to this year&#8217;s final with a 6-0, 6-0 victory in the semifinals over Heidelberg&#8217;s Chelsea Cotter in Wiesbaden, Germany, on Friday.