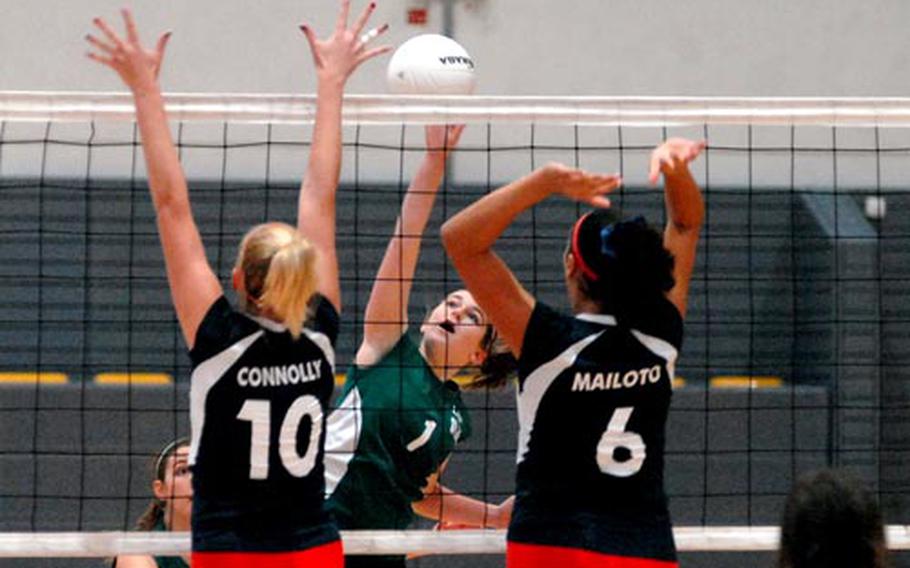 Bridie Condon of Naples knocks the ball over the net between the outstretched hands of Aviano&#39;s Kelly Connolly and Jasmine Mailoto. Naples won the Division II match 25-20, 14-25, 15-10 at Ramstein on Friday. (Michael Abrams / S&S)

Bridie Condon of Naples knocks the ball over the net between the outstretched hands of Aviano&#39;s Kelly Connolly and Jasmine Mailoto. Naples won the Division II match 25-20, 14-25, 15-10 at Ramstein on Friday. (Michael Abrams / S&S) 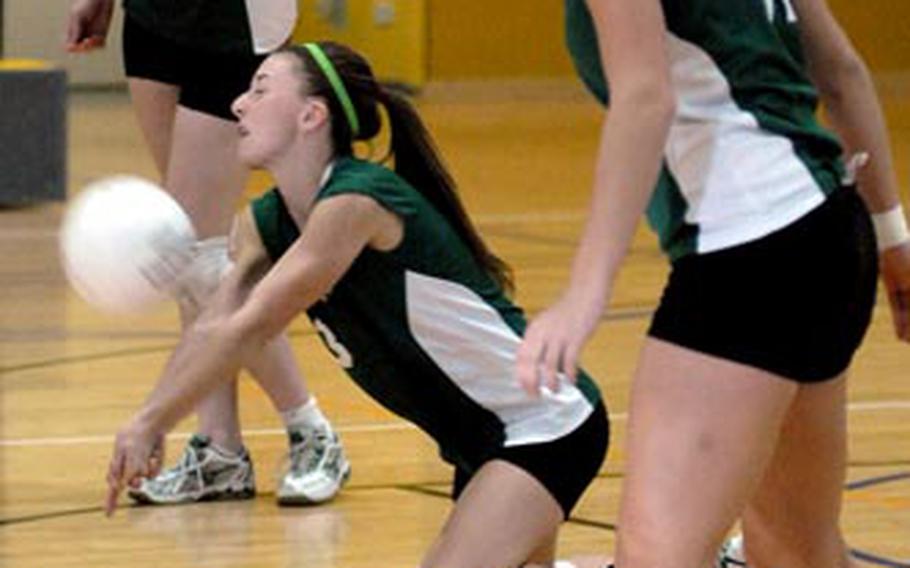 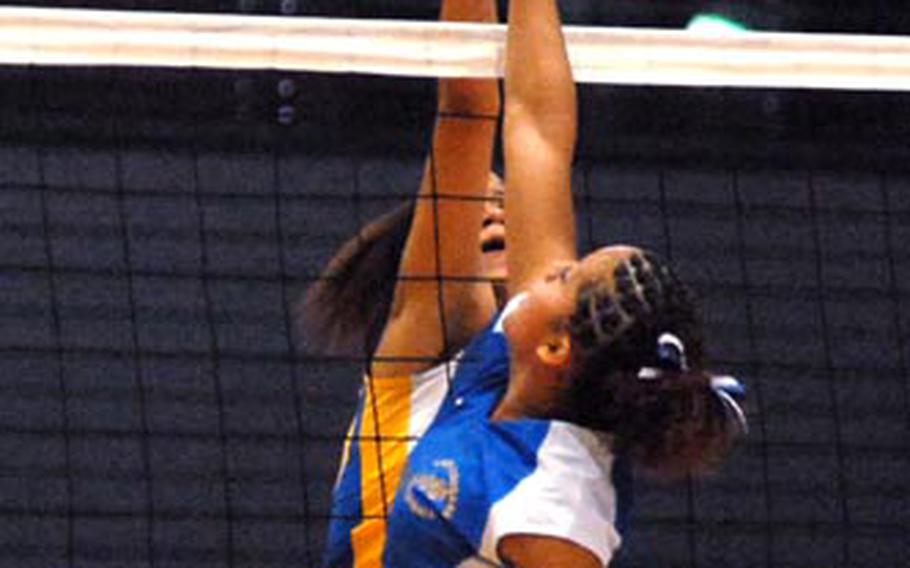 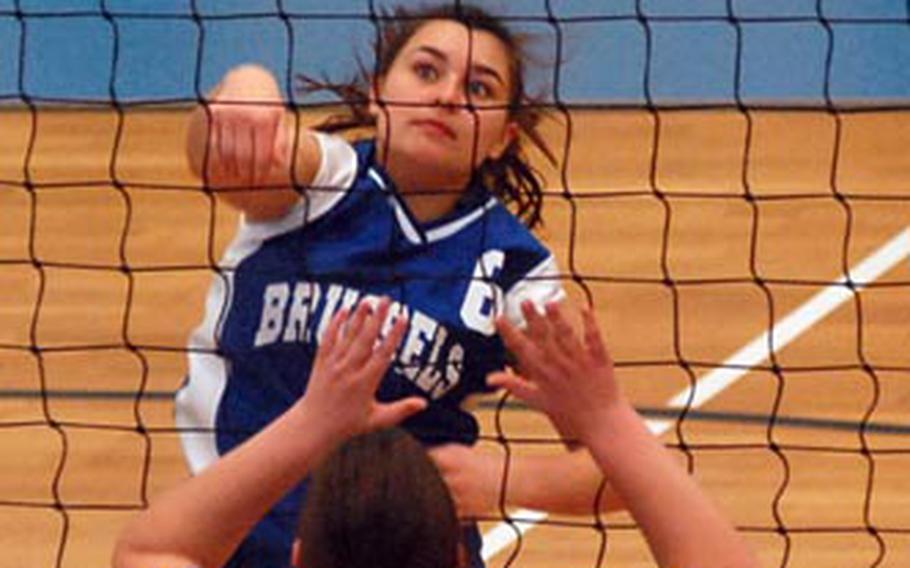 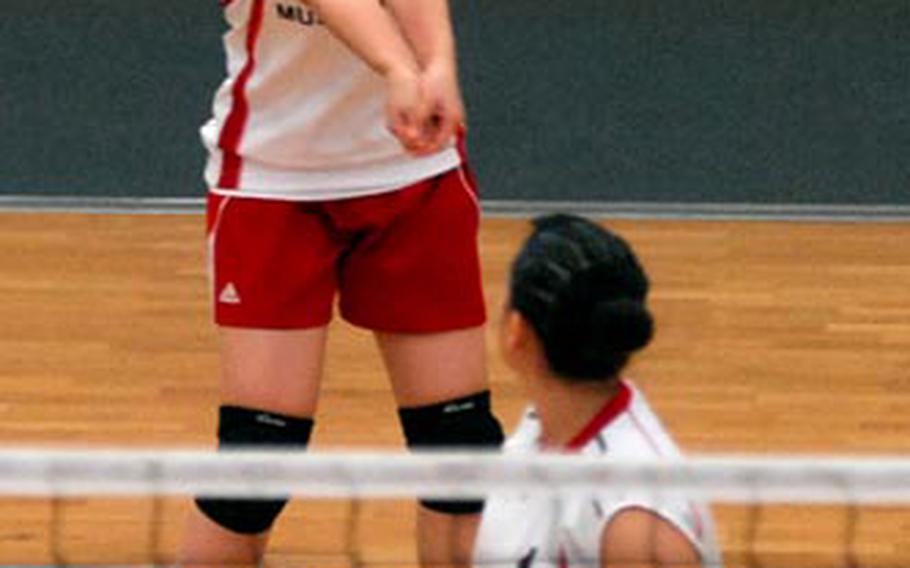 Menwith Hill&#39;s Stephanie Gomez keeps her eyes on the ball as she sets up a shot, as teammate Susan Shorkey watches. The Mustangs beat Lajes in a Division IV quarterfinal 25-12, 25-11 in Kaiserslautern on Friday. (Michael Abrams / S&S)

KAISERSLAUTERN, Germany &#8212; All four No. 1s and all four No. 2s moved into the championship games of the three-day DODDS-Europe girls volleyball tournament on Friday.

All eight will try to nail down titles in consecutive matches beginning at 10 a.m. Saturday at the Ramstein Southside gym.

A title rematch will follow at 11:30 a.m., when top-seeded defending D-III champ Marymount takes on 2007 runner-up Baumholder. In addition to facing each other in last year&#8217;s title game, the two, both unbeaten so far, also squared off in Friday night&#8217;s final round-robin game, being played as this edition of Stars and Stripes went to press.

Meghan Young dished out 31 assists, Cameron Prenger posted 12 kills and nine aces, and Stephanie Friehe made seven digs for BFA, which reached the final for the first time in four years.

Like the D-III title clash, the Division I finale at 2:30 p.m. is a rerun of Friday night. No. 1 Ramstein, chasing its fourth straight title, and No. 2 Heidelberg each took 5-0 records into their final round-robin game which began after press time Friday.

Although Naples missed the title game, the Wildcats enjoyed a full dose of joy in the quarterfinals derived from defeating defending champion and archrival Aviano 25-20, 14-25, 15-10 in the afternoon quarterfinals.

"This is just my first year with the team," Naples assistant Claudia Scherillo said after admitting she didn&#8217;t know the last time the Wildcats had beaten Aviano. "I know it&#8217;s been long enough that it feels really good."

Naples captain Sammie Dozier hasn&#8217;t been with the team long enough to remember the last victory over Naples, which came in 1999, but she savored the moment Friday.

"We pretty much knew we had to shine today," Dozier said after Naples had ridden five straight service points by Jenny Horadan to break a 10-10 tie in the final game. "They beat us during the season so we had to do it today."