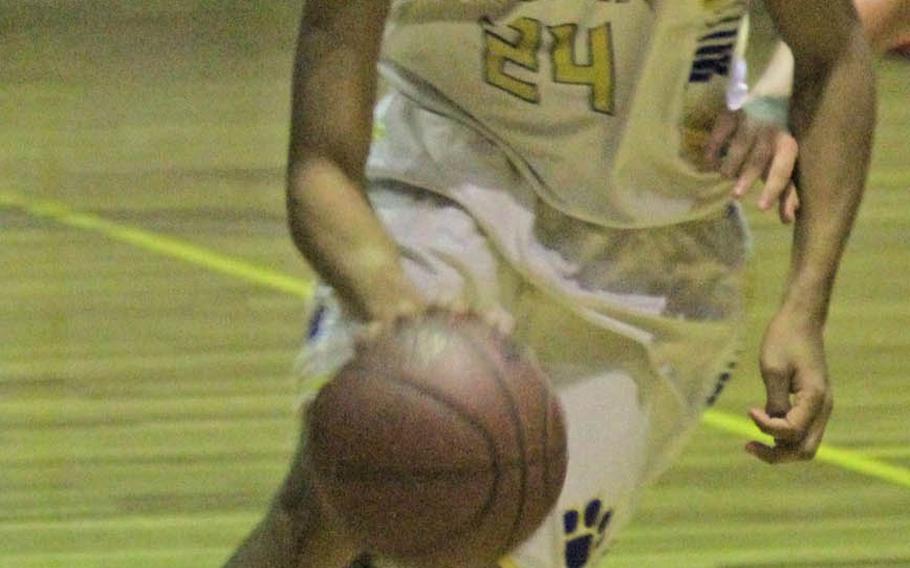 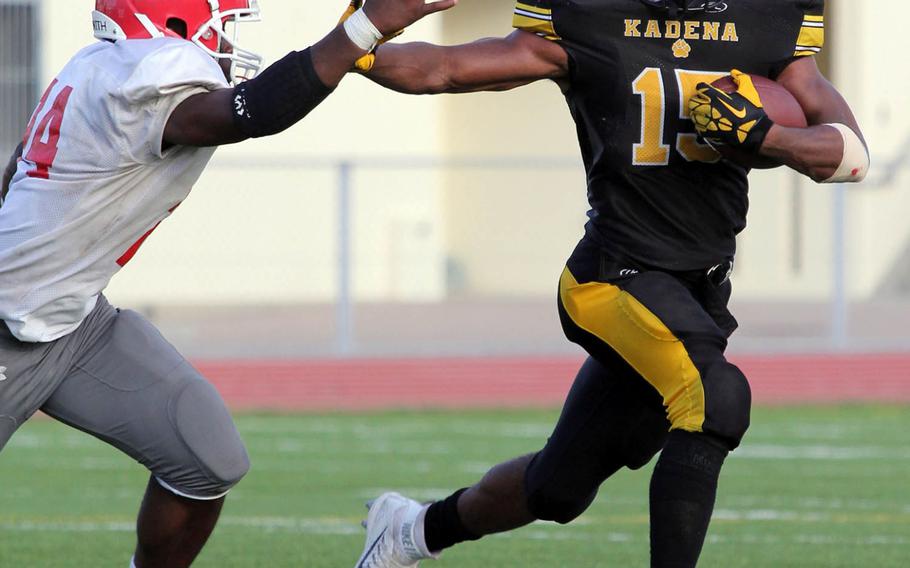 Senior RB Jason Bland helped pace Kadena to its second straight Far East Division I football title and Pacific-best fifth overall by scoring on his final carry in Panther uniform. Kadena rallied past Kubasaki 20-16 for the title. (Mary Obsuna/Special to Stars and Stripes) Running back Josh McCaw scored five rushing touchdowns to power Daegu to its third straight Far East Division II football title, a week after joining teammate DeAndre Rosalie as the third pair of Pacific backs to rush for 200 or more yards in a game. (Yenah Joe/Special to Stars and Stripes) 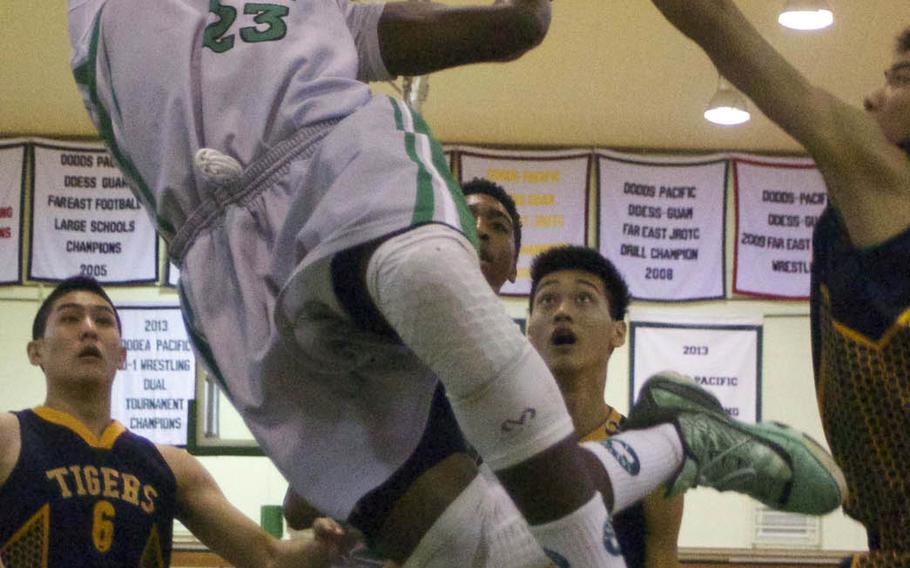 Senior Nick Ashley shot 12-for-16 from the foul line to help boost Kubasaki to the Far East Division I boys basketball tournament title and its fourth in nine seasons under coach Jon Fick. The Dragons beat Kadena 76-64 in the title game. (Miranda Fino/Special to Stars and Stripes) 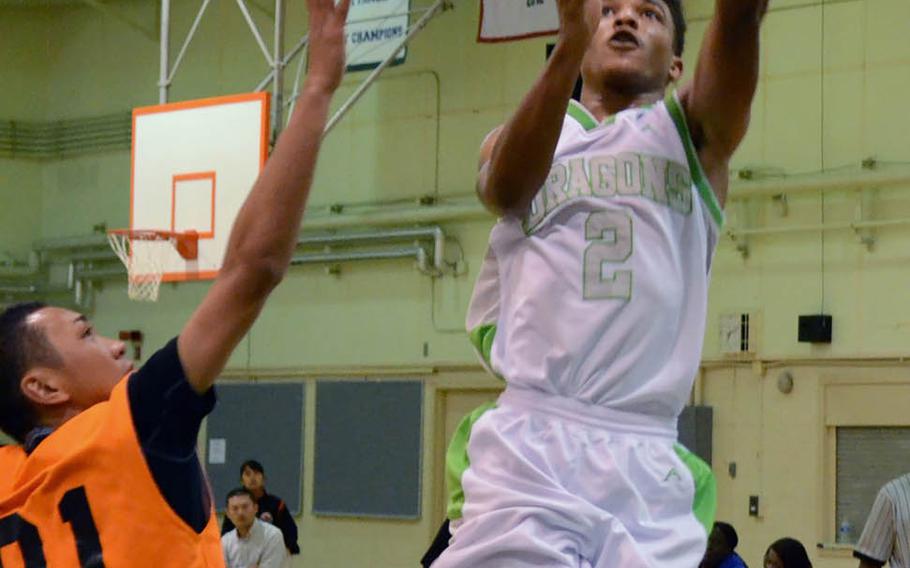 Junior Jacob Green shot 9-for-10 from the foul line and added eight assists and eight steals to help boost Kubasaki to the Far East Division I boys basketball tournament title and its fourth in nine seasons under coach Jon Fick. The Dragons beat Kadena 76-64 in the title game. (Miranda Fino/Special to Stars and Stripes) 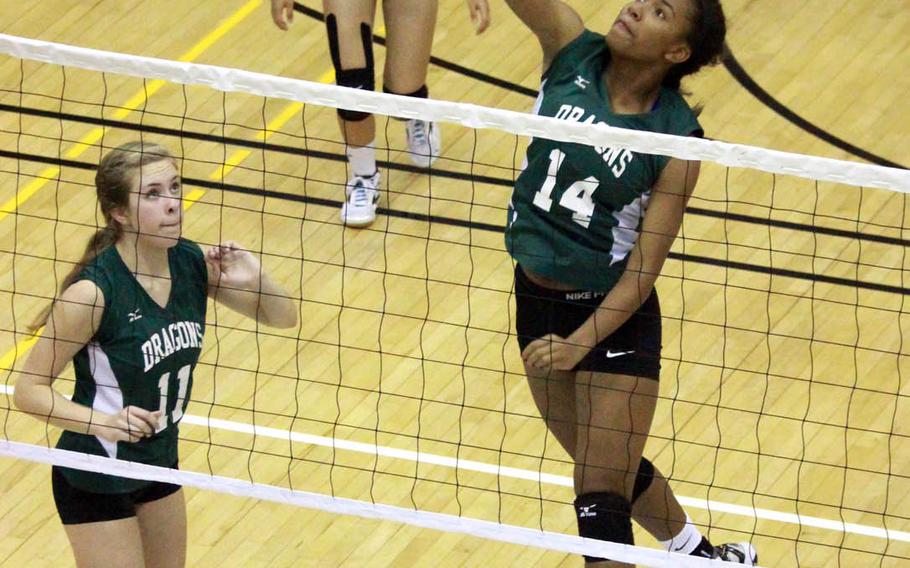 Senior middle blocker Josie Daffin not only helped pace Kubasaki to its second straight Far East Division I girls volleyball tournament title; she signed a national letter of intent to play for NCAA Division I Alabama A&M. (Caylin Smith/Special to Stars and Stripes) 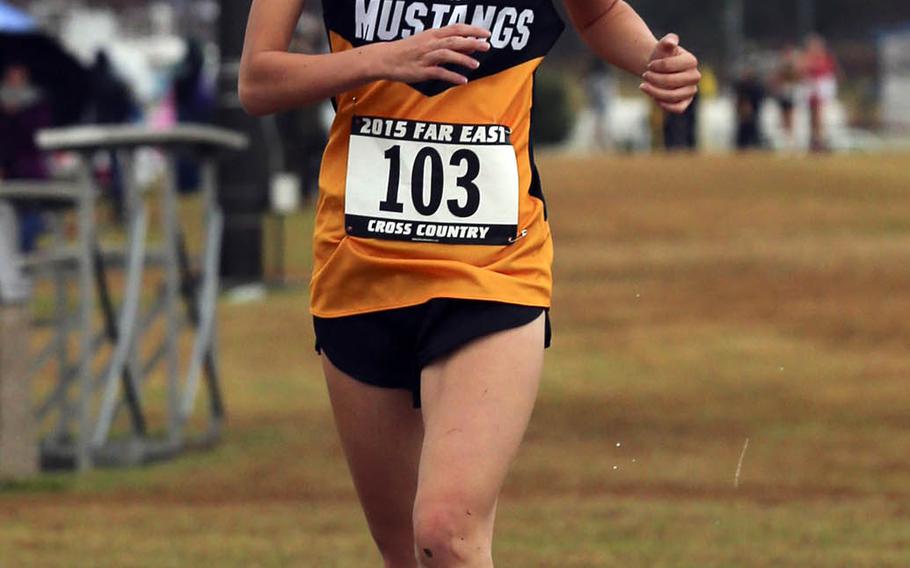 He’d watched the DODDS Japan, Kanto Plain and Far East finals from the sidelines a year ago, saddled by a stress fracture in his shin. Yokota senior Daniel Galvin vowed the same thing would not happen again.

He won all three events, setting the high school course record on the Camp Fuji course to win a rare Pacific cross-country triple crown. ASIJ junior Lisa Watanuki did the same on the girls side, winning the Kanto, Far East and Asia-Pacific Invitational finals.

Coach Chris Eastman had to feel like a chess grandmaster, with all the personnel moves he had to make in the wake of injuries that sent many of his stars to the sidelines for long stretches.

But with Kennady White scoring twice and MVP Charlee Bodwell doing the work behind the scenes, Kubasaki’s girls blanked Nile C. Kinnick 4-0 to repeat their D-I tournament title and cap a 14-0-3 season. It was the fifth straight year Kubasaki had reached the final, but the first time the Dragons repeated the title since 2002-03.

Josie Daffin not only helped lead Kubasaki girls volleyball to a D-I title repeat, she earned a full scholarship to play for NCAA Division I Alabama A&M in the process.

Before putting ink to National Letter of Intent, Daffin had 13 kills, matching teammate Maiya Larry for the team high, and the Dragons outlasted ASIJ in five sets, beating the Mustangs for the title for the second straight year.

A week earlier, Tyson Moore appeared destined to watch the Far East D-II boys soccer tournament on the sideline. But coach Mark Lange changed his mind, added the sophomore to the roster and he responded with two goals as Matthew C. Perry beat Zama 3-1 for the title.

Moore earned tournament Golden Boot honors with 10 goals. It was the fourth straight championship for the Samurai, who are approaching dynasty status. They went 20-1-4 on the season and have won five of the last six D-II titles.

He’d not wrestled in high school before last season, and debuted by getting pinned. Dre Paylor, a Nile C. Kinnick junior, did not lose again, capping his season with a 15-4 technical fall over the guy who beat him in that debut bout, Ricky Salinas of Kadena.

“What do we have to do to beat this team?” Mia Weinland asked coach Julie Rogers after her American School In Japan girls basketball team lost in pool play to Kadena in the Far East Division I Tournament.

They scouted. They formulated a plan. They were ready for the second go-round in the final, in which they beat the Panthers 46-38. Weinland had 22 points and 19 rebounds. She never lost a home game in volleyball or basketball and graduated a five-time Far East tournament champion.

Free throws proved to be the undoing of Kadena and the boon for the Dragons as they captured the 12th Far East D-I boys basketball title in school history and the fourth in coach Jon Fick’s nine-season watch. The Dragons beat the Panthers 76-64 in the title game.

Doing the most damage were senior Nick Ashley, who shot 12-for-16 from the foul line and earned tournament MVP honors, and junior Jacob Green, who went 9-for-10 and added eight assists and eight steals.

Being in a hole, trailing by a bunch of points, seemed to suit Warriors football just fine; they rallied from deficits of 20-12 and 28-6 in their last two games to win their third straight D-II title.

Senior back Josh McCaw rushed 31 times for 188 yards and five touchdowns in the rain as Daegu came back to beat Yokota 51-36 in the championship game. It capped a season in which the Warriors had to adjust to a new coaching staff and a changing schedule.

Senior running back Jason Bland rallied the Panthers to a 20-16 D-I football title-clinching victory at Kubasaki with that touchdown. It was the second straight D-I championship for Kadena and their Pacific-best fifth overall in eight title-game appearances.

No. 1: What a mountain Yokota boys basketball faced.

Not only did Jadan Anderson and the Panthers have to win five games to capture their first Far East Division II Tournament title, but Anderson - Yokota’s senior guard - had to stop the opponents’ best players as well as be shadowed himself.

So before he and Yokota embarked on that seemingly impossible journey, he grabbed the yellow notepad on the desk in his billeting room and penned the following:

“Today is the day we show the impossible is possible. Let’s take one game at a time.”

Somehow, he and the Panthers made it happen, winning all five games. And Anderson did his red-letter best to shut down the other teams’ best players, Osan’s Nick White and Matthew C. Perry’s Jon Cadavos.

It all came together in the championship game, in which the Panthers beat the host Samurai 78-50 on Feb. 18.

Before the game, “We were all looking at each other and laughing,” Anderson said. “It was a strange energy, but we knew each one of our teammates was ready for the next game. … We all wanted to win so badly for coach and for each other.”

It capped a season in which Yokota went 26-1 – the only loss to Perry earlier in the D-II playoffs.

“I hate to say it was good for us to lose that game, because it made the road to the championship a lot harder for us,” said Anderson, who would be accorded tournament MVP honors. “But the way we as a team came back from it really made the title even sweeter.”

In so doing, Yokota became the first DODDS team to capture titles as both a small and large school.

Yokota’s triumph was the signature moment for a program that enjoyed banner winter and spring sports seasons in the school’s first year classified as a small school. DODDS Pacific, citing a drop in enrollment, moved Yokota to D-II on Nov. 18, 2014.

Yokota’s feats over those two seasons rate as Stars and Stripes Pacific’s top sports story for the year 2015.

James Kimber contributed to this report.