'Tiny but mighty' Pusan American turns it around in Korea softball 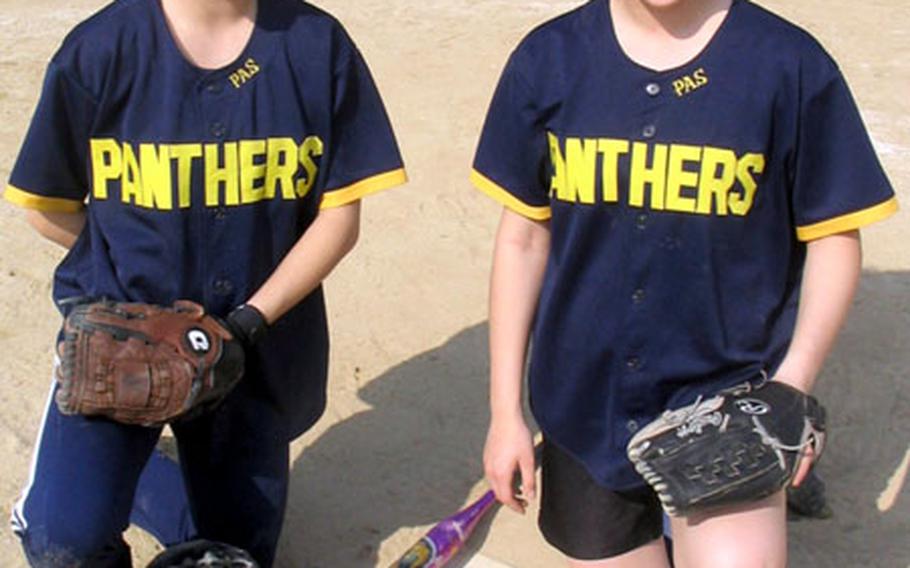 Pusan American senior catcher/pitcher Jeni Smith and her sister, freshman pitcher/catcher Ashley Smith. The Panthers have only eight players, and must borrow a player from their opponents. (Courtesy of David Clausen)

For the first two seasons of girls softball in Department of Defense Dependents Schools-Korea, the rites of April were as sure as flowers blooming and taxes: Seoul American rolled unchallenged to the league title while Taegu, Pusan and Osan American battled it out for second.

Through two weeks&#8217; play, two little schools have had their way. Taegu American and Pusan American each beat the Falcons; they&#8217;re tied atop the league at 4-2. Seoul American is a game back at 3-3; Osan American is last at 1-5.

Perhaps most surprising has been Pusan American, with its pitching-catching sister combination of senior Jeni Smith and freshman Ashley. The school is to close in June. The roster has just eight players; the Panthers have to borrow a ninth from each team they play just to take the field.

The opener showed that, Cottrell said, when the Panthers fell behind 4-0 in the first inning, only to score five in their half.

Taegu&#8217;s Millar said the Panthers also provided a bit of inspiration for his Warriors.

And Tank Hancock &#8212; the Warrior who smacked a bases-loaded, two-out triple to break a 10-10 tie against Seoul American &#8212; also was one of the heroes of Taegu American&#8217;s first Far East Class A basketball tournament title team.

He said the two former also-ran teams&#8217; early successes also should serve as a lesson to the entire league as the season wears on toward its April 29 conclusion at Seoul American: