These Nielsens get high ratings at Kubasaki 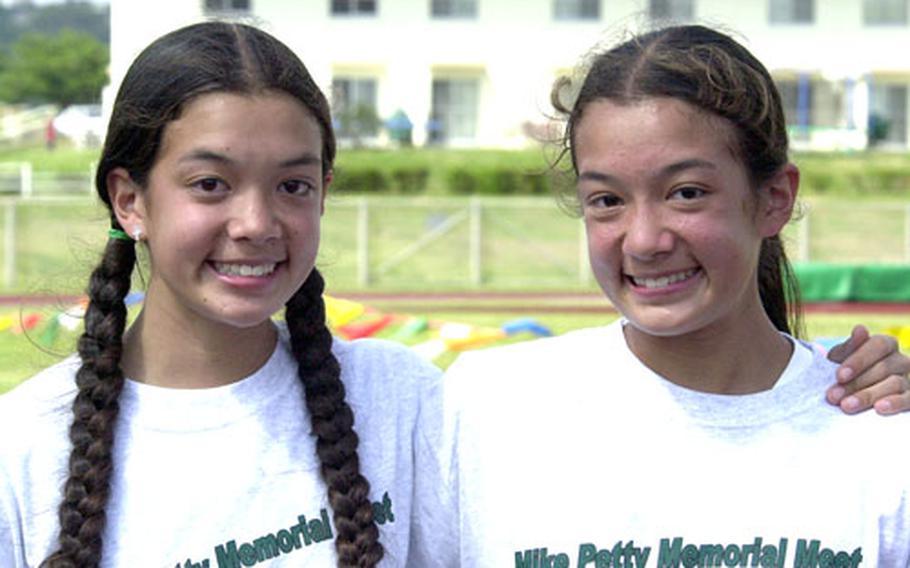 Lisa, right, and Beth Nielsen push for the finish line during the 1,600-meter race at a recent meet at Camp Foster. Lisa took first in 6 minutes, 12 seconds, and Beth was second, two seconds behind. (Dave Ornauer / S&S)

CAMP FOSTER, Okinawa &#8212; There are twins. There are identical twins. Then there are Kubasaki distance runners Beth and Lisa Nielsen.

But they also often drive the competition. They split the gold in the distance events in the Petty track meet earlier this month &#8212; Lisa won gold in the 1,600, and Beth claimed first place in the 3,200.

Crystal and Candace Sandness dominated cross country as sophomore transfers from Utah. With Candace on her heels, Crystal virtually rewrote Okinawa&#8217;s distance record book in the spring of 2004. The two since have returned to Utah.

In their wake were the Nielsens, another pair of runners whoregularly finished about three minutes behind.

But the Sandness twins didn&#8217;t discourage the Nielsens &#8212; they inspired them.

The daughters of Murl Nielsen, an Army Corps of Engineers contractor at Camp Foster, and his wife, Lynn, the twins moved to Okinawa from Camp Zama in the summer of 2003. They ran track as Zama American High School freshmen &#8220;and then did nothing for 10 months after we moved, trying to get settled,&#8221; Lisa said.

&#8220;That helped our conditioning and endurance and helped us prepare for cross country, which we had never done,&#8221; Beth said.

They took to it, regularly finishing in the top five in regular-season meets. Beth even outperformed Crystal Sandness in the island championship Oct. 27, running 3.1 miles in 21:18 to Sandness&#8217;s 21:26. Lisa was seventh in 22:29.

Beth had another top-five finish in the Nov. 8 Far East meet, running just 46 seconds behind champion Niki Kauzlarich of Kadena.

The twins said such results inspired them to even greater efforts on the track this spring.

It&#8217;s more than OK, said their coach, who has seen the Sandnesses transfer, senior sprinter Serafina Smith suffer a stress fracture in her foot and distance runner Andrea Roxas graduate.

So how fast can they go?

Burns said he believes that &#8220;with some hard work, some weight training,&#8221; they could be as swift as the Sandnesses.