The common theme in Korea: Start over 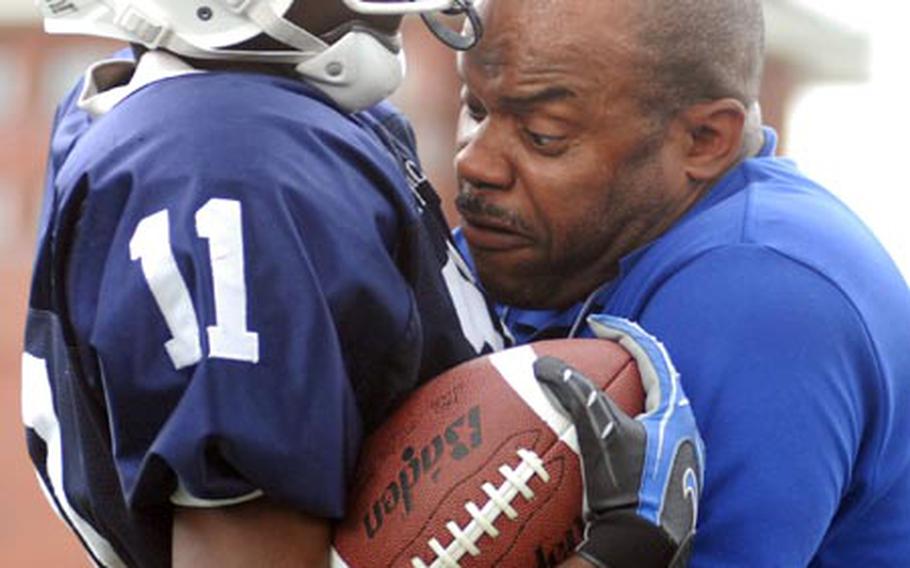 YONGSAN GARRISON, South Korea &#8212; A morning public-address announcement at Seoul, Osan or Daegu American schools these days might well include the following:

"Help wanted: Big, beefy student-athletes to play for the high school football team. Hit and be hit. Experience preferred but not necessary. Inquire at the coach&#8217;s office."

With just 14 returning staters among them, the three DODDS-Korea Football League team coaches are wondering how soon they can make their teams competitive.

"We are beginning from scratch," said Ken Walter of Daegu, which lost the Class A title game 27-6 to Robert D. Edgren last season &#8212; then said farewell to nine offensive and eight defensive starters.

The good news for each team is there are plenty of young players hungry for their chance to shine. But they might need a season or so to take root.

Sixth-year coach Julian Harden says he plans to step away from what has worked for him over the years.

"I want to try things we haven&#8217;t done. Give us a new look," Harden said. "If better is possible, good is not enough. They have a little more base of understanding, they come from legitimate power programs, and they&#8217;ll improve ours."

Walter will rely on four new assistant coaches to help mold a small group of holdovers from the Class A runner-up squad with what he calls "some very coachable and hard-working players" who have moved to Daegu.

"We are working hard to match our schemes with the type of athletes we have," he said. "I feel like I have pretty good skills players, but few experienced linemen. It should be an interesting year."

Back in Cougars uniform is the last holdover from the 2005 Class A title team. Will Rapoza, a senior running back, returns after missing 2007 due to knee-ligament surgery.

Like Daegu, Osan boasts several key skills players, but not much interior experience.

Allen says he thinks Daegu can repeat its Korea Class A title game berth, with a trip to Misawa Air Base to face Edgren on the line.

"Daegu has a quality squad," Allen said, adding that he saw the Warriors during a 7-on-7 scrimmage last spring. "They&#8217;re the reigning champions for Korea. Until we beat them, they&#8217;re the champions."