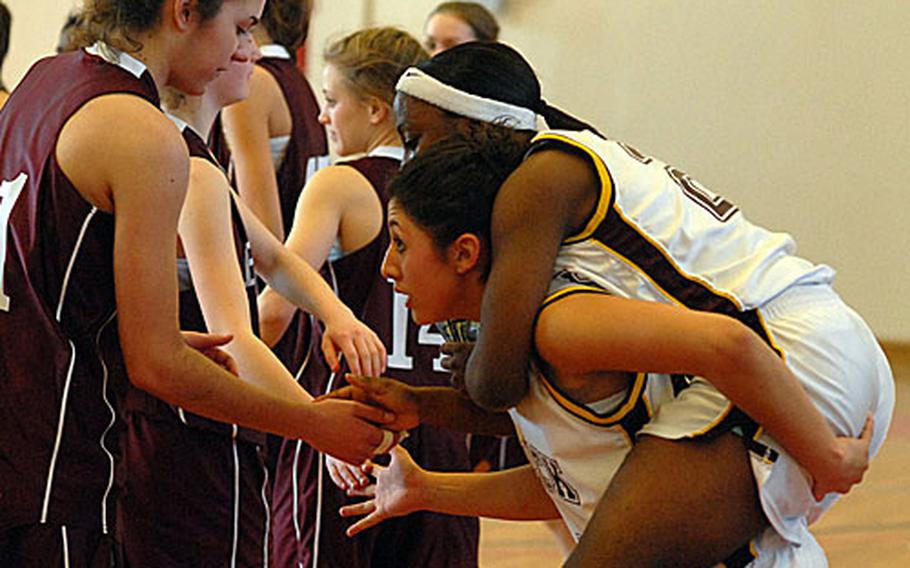 Vilseck&#39;s Cathy DelaRosa carries teammate Alania McKinnis piggyback as they shake hands with AFNORTH players after Vilseck&#39;s 39-7 win in opening day action at the DODDS-Europe basketball finals. McKinnis was injured late in the game, and DelaRosa also carried her from the court. (Michael Abrams / S&S)

Vilseck&#39;s Cathy DelaRosa carries teammate Alania McKinnis piggyback as they shake hands with AFNORTH players after Vilseck&#39;s 39-7 win in opening day action at the DODDS-Europe basketball finals. McKinnis was injured late in the game, and DelaRosa also carried her from the court. (Michael Abrams / S&S) 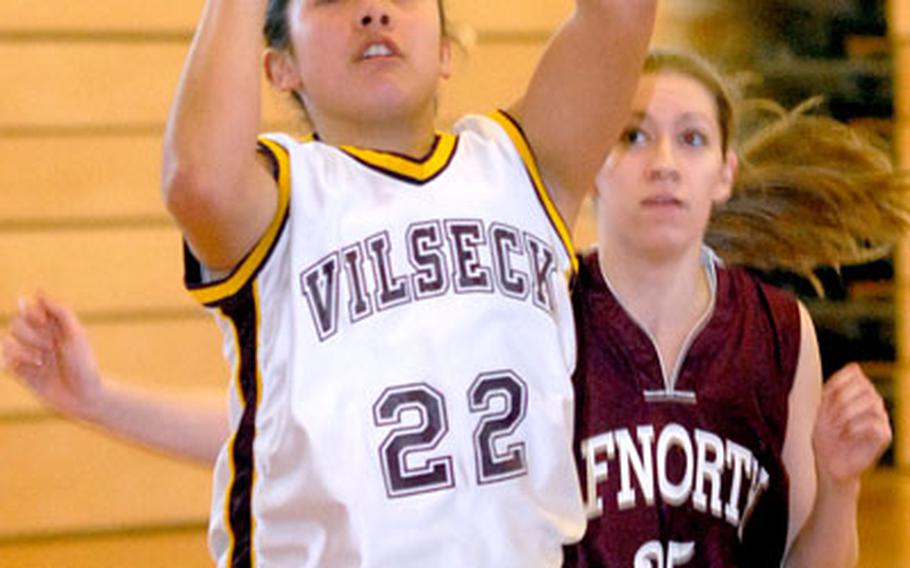 Cathy DelaRosa of Vilseck gets a shot off in front of AFNORTH&#39;s Sarah Roberts in Vilseck&#39;s 39-7 win in opening day Division II action at the DODDS-Europe basketball finals in Mannheim on Wednesday. (Michael Abrams / S&S) 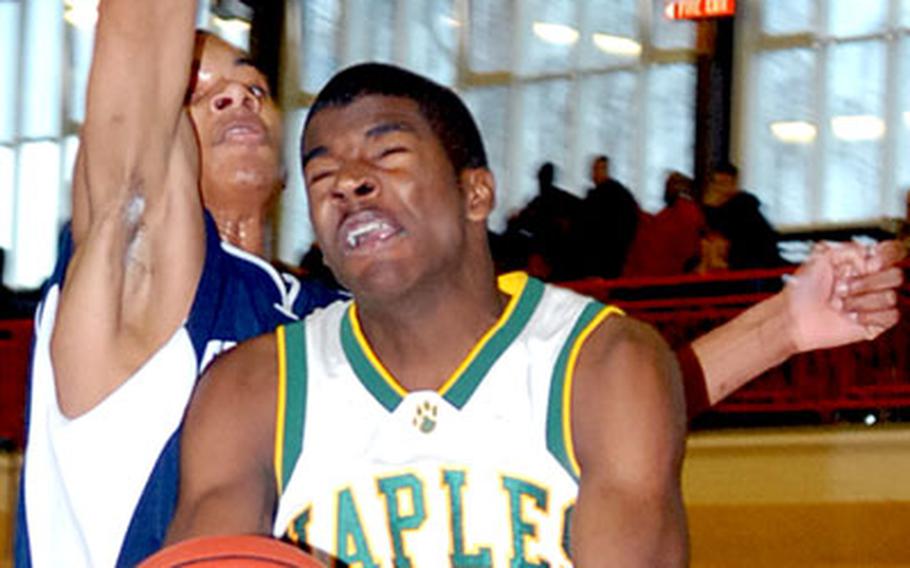 T.J. Lumar of Naples goes to the hoop against Bitburg&#39;s Mario Shanks in opening-day action at the DODDS-Europe basketball finals in Mannheim on Wednesday. Naples won the Division II game, 55-42. (Michael Abrams / S&S)

Taylor, a 5-foot-6 transfer student, let the game come to him.

&#8220;Then&#8221; in this case was the third quarter, when Naples doubled its five-point halftime lead. Taylor, who scored half of his game-high 28 points in that quarter, slashed and spun through the lane, sank four field goals, including two three-pointers, and put himself on the foul line six times, converting four free throws.

Taylor&#8217;s performance was the most productive in the 20 boys and girls games that opened this four-day finale to the season.

In the girls tournament, Wednesday&#8217;s Division I games were played at Heidelberg High School, where the home team posted the biggest surprise of the day. The Lady Lions knocked off defending European D-I champion Kaiserslautern 49-34.

Wednesday&#8217;s other noteworthy pool-play games, all of which have seven-minute quarters instead of eight, included:

Vilseck boys 48, Aviano 29: Chris Lewis and Dex Johnson each scored 12 points, and Ronnie Turner added 10 as the Falcons went on a 12-0 run over the first 5:57 of the third quarter to expand their 22-9 halftime lead in a Division II game.

W&#252;rzburg boys 45, Mannheim 20: W&#252;rzburg, which won the past two D-I tournaments, unleashed a game-long full-court press on Mannheim that held the Bison scoreless until 5:27 remained in the second quarter.

Vilseck girls 39, AFNORTH 7: Cathy DelaRosa scored all of her game-high 14 points in the first three quarters, then carried injured teammate Alania McKinnis off the floor in the fourth quarter. Ashley Hicks, who like DelaRosa sat out the final quarter, scored 10 points.

The loss was the second of the day in the D-II event for AFNORTH, which also fell to second-seeded Baumholder 44-22.

SHAPE girls 34, BFA 33: SHAPE got three three-point plays from Justine Shelton before halftime, and Black Forest Academy, trailing 34-32, went 1-for-5 from the line in the final 1:16. Shelton led all scorers with 15 points.

The 51-game schedule continued into the evening on Wednesday. Thursday&#8217;s schedule begins at 8 a.m. at six sites in the Mannheim-Heidelberg area. Admission is free at all of them.

During the final two days of the tournament, admission is $5 for adults and $3 for students.