Athlete of the Year - boys tennis

Tahirovic was unbeatable on the court - again 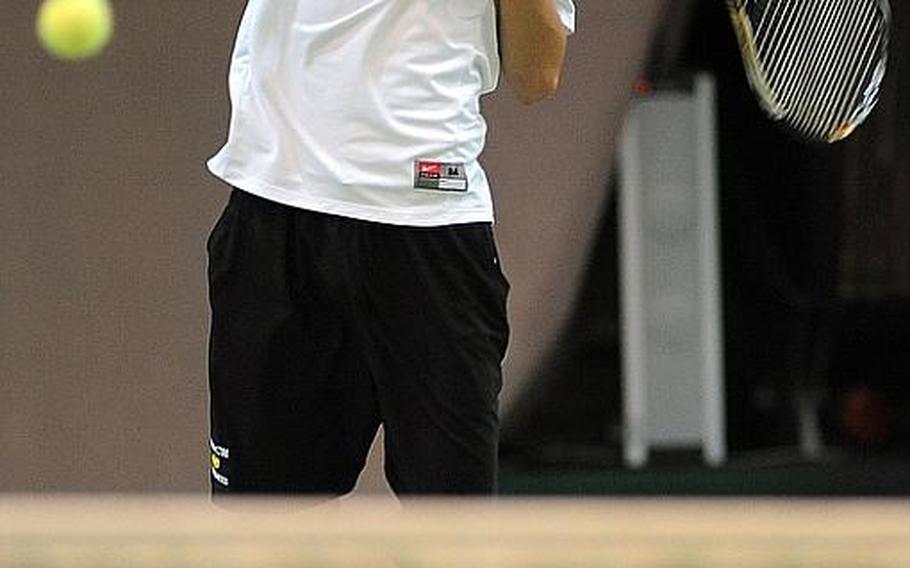 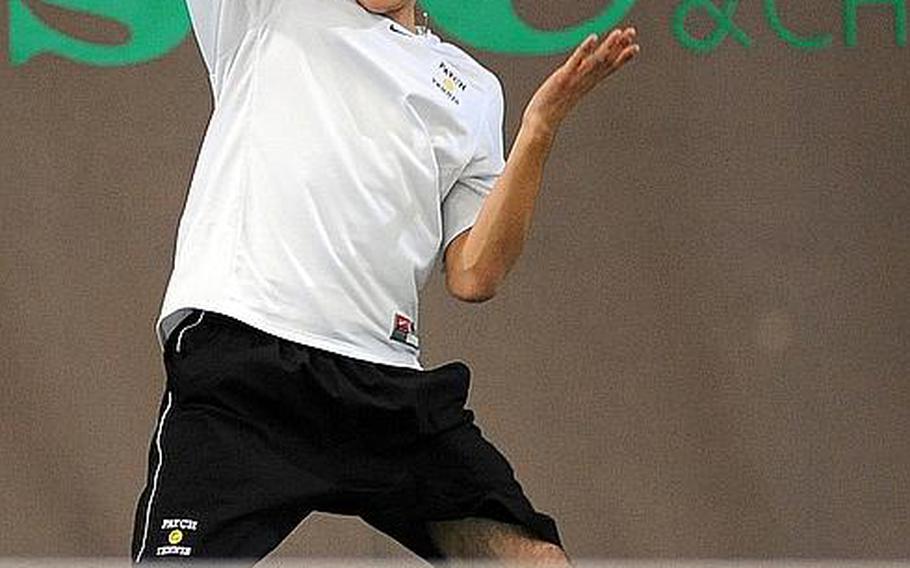 Buy Photo
Defending champion Ajdin Tahirovic returns a ball from SHAPE's Dimitrios Stavropoulos in his 6-4, 6-3 victory in the boys single match at the DODDS-Europe tennis championships in October. Tahirovic has been named the Stars and Stripes Athlete of the Year for boys tennis for the second year in a row. (Michael Abrams/Stars and Stripes)

WIESBADEN, Germany &mdash; Ajdin Tahirovic is a name that inspires a mixture of fear and admiration from boys singles competitors in DODDS-Europe tennis.

It&rsquo;s easy to see why. After capturing his first European championship as a freshman, the 15-year-old Patch sophomore came into the 2011 DODDS-Europe tennis championships as the heavy favorite to repeat.

Standing in his way was Dimitrios Stavropoulos, a hard-charging freshman from SHAPE, who seemed just as capable as Tahirovic of drawing plenty of &ldquo;oohs and aahs&rdquo; from the fans.

Tahirovic said he was extra motivated for the championship match because he heard mumblings from the spectators that the SHAPE freshman might just do the unthinkable &hellip; knock Tahirovic off his throne.

&ldquo;I told myself, let&rsquo;s prove it to them that they&rsquo;re wrong,&rdquo; Tahirovic said.

He did just that with a 6-4, 6-3 straight-set victory, helping him earn recognition as Stars and Stripes&rsquo; Athlete of the Year for boys tennis in 2011.

The victory was the culmination of something he&rsquo;s been doing during his two years of DODDS-Europe tennis, overwhelming his opponents with a balanced attack and cunning strategy. The victory also gave him the distinction of not losing a single match during his freshman and sophomore campaigns.

Tahirovic said not having a loss under his belt in DODDS-Europe doesn&rsquo;t minimize his competition.

&ldquo;I have a ton of respect for everybody I play, I always make friends with them, it doesn&rsquo;t matter,&rdquo; Tahirovic said.

The Bosnian-born Tahirovic first picked up a racquet at the ripe age of 5 as he played tennis with and tried to emulate one of his tennis idols: his father, Ismet.

&ldquo;Every day when we were out there, I enjoyed it more and more,&rdquo; Tahirovic said. The enjoyment of the sport led him to start playing in tournaments as a kid when the family moved to Vermont.

Although his schedule is now jammed full of school, homework, tennis practice, tournaments and hanging out with friends, Tahirovic hasn&rsquo;t lost what he considers the most important part of his game: having fun.

It&rsquo;s a lesson that was driven home when he met former No. 1 ranked tennis star from Sweden, Mats Wilander.

Wilander told the Patch sophomore that if he has the talent and enjoys what he&rsquo;s doing, he&rsquo;ll win, but cautioned that the minute tennis become a job, that&rsquo;s when he&rsquo;ll lose.

Patch coach Walter Fritz said Tahirovic&rsquo;s talent, work ethic and desire are unrivaled and what really sets him apart is his willingness to help anyone on the team to improve their game.

&ldquo;It&rsquo;s like having Federer at practice every day, it gives everybody a target to shot for,&rdquo; Fritz said, referencing one of Tahirovic&rsquo;s tennis idols.

Helping teammates is something Tahirovic says is important to him, because he enjoys helping others and wants to see the entire team succeed.

&ldquo;Playing for the high school tennis team is a bunch of fun,&rdquo; Tahirovic said, adding that he loves to wear his Patch uniform around to show off his Panthers pride.

Tahirovic hopes to earn a college tennis scholarship and one day join the professional ranks.