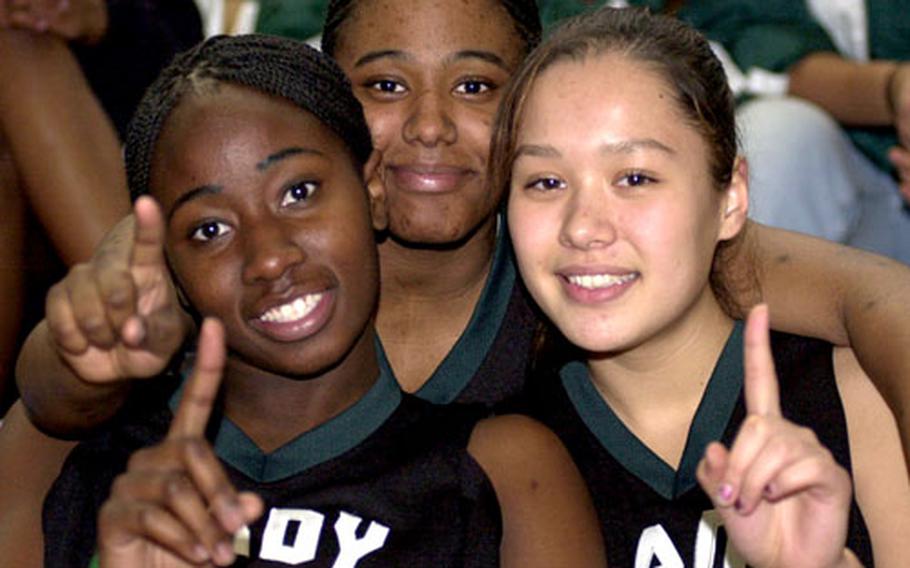 What the &#8220;core&#8221; group of players did was win every championship for which they competed: Far East Class A titles in volleyball and basketball and the Department of Defense Dependents Schools-Korea softball crown.

Only once had Taegu American&#8217;s volleyball team even shared a KAIAC title, and only once, in 2001, did a Warriors girls basketball team reach a Class A title game, which it lost.

The three seniors said they simply were tired of losing.

This year of change began with volleyball. Grant and Cox paced the Warriors to a school-first: season sweeps of Seoul Foreign and Seoul American as well as the Class A title.

In basketball, the Warriors were a school-best 14-4 in the regular season and 24-9 overall.

With Hancock, Cox and league MVP Grant leading the way, the Warriors bulldozed their way to an unbeaten Class A run, culminating with a Feb. 24 come-from-behind 38-28 championship victory over Faith Academy.

Grant scored eight of her 17 points in the fourth quarter, rallying Taegu from a 25-16 deficit.

Grant secured MVP honors in both the volleyball and basketball tourneys. But, she stressed, &#8220;those MVP awards belong to the team. I couldn&#8217;t be out there doing it all by myself.&#8221;

Each of the seniors nursed injuries during the basketball season; Grant&#8217;s knee and ankle ached so much she considered not playing softball.

But a few weeks into the softball season, the coaches asked her to return because of injuries to other players. Grant said she &#8220;just got back into the feel of it and wanted to play. It turned out well.&#8221;

Said Hancock, who&#8217;ll play on partial scholarship for Division II Central Arizona: &#8220;It feels good knowing I can do anything and be part of a winning team.&#8221;