Taegu fielded a football team with some help from archrival Pusan 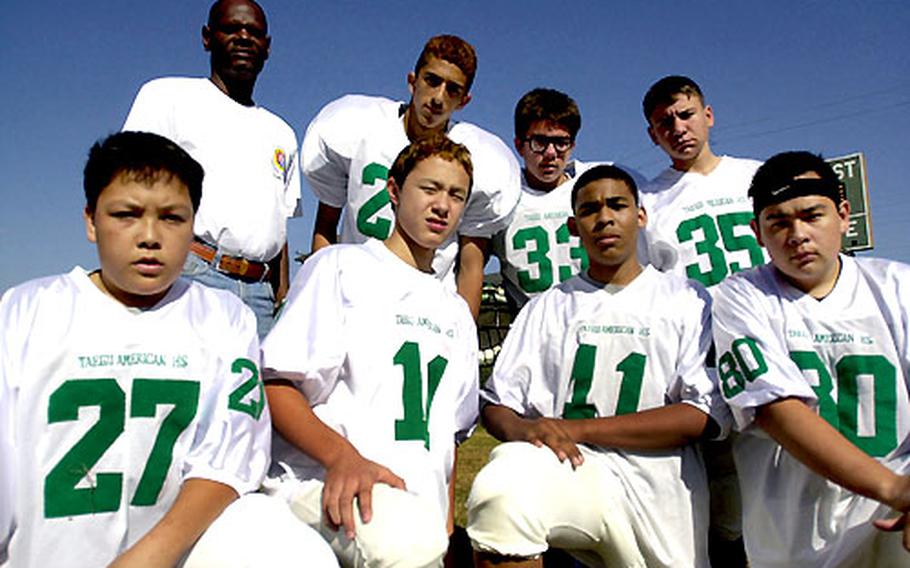 Seven members of Taegu American’s football team are students as Pusan, the school’s biggest rival. The schools are working together since neither had enough players to field a team of its own. Pictured above is the Pusan contingent. Front row, left to right: Jonathan Brunner, Chris Moye, Detlef Loyd and Aaron Brunner. Back row, left to right: Coach Robert Dickson, Chris Rodriguez, Conner Atwood and Robert Smith. (Joseph Giordono / S&S)

New to Taegu American School, he was handed the reins to the Warriors football team, which was to begin its first season under the Department of Defense Dependents Schools- Korea umbrella after 25 years within the 8th Army youth activities system.

But there weren&#8217;t enough players to field a team. Alsup needed outside help.

About 90 minutes southeast of Taegu, Pusan American faced its own dilemma. A handful of students there wanted to don helmets, shoulder pads and spikes, but not enough for the school to field a team. Not without outside help.

A phone call from Pusan to Taegu solved both their problems &#8212; and created a rare alliance between two archrivals in the Korean-American Interscholastic Activities Conference.

Never before in the Pacific region had two DODDS programs pooled resources to form one team in any sport.

After practice began Aug. 25, he tried for four weeks to fill the roster before the Warriors&#8217; season opener Sept. 27 at Osan American. Once Pusan and Taegu hooked up, finding players wasn&#8217;t a problem.

Robert Smith, a junior who joined the squad as a defensive end and fullback, was broached about the idea of playing for the Warriors during a 6-on-6 pickup game at a friend&#8217;s birthday party.

Alsup convinced the league and Osan to postpone their game until Nov. 1, giving the team more time to prepare for an Oct. 4 clash against Seoul American at Camp Walker.

They began the season with 12 players from Taegu American and nine from Pusan American. Those numbers have dwindled to 10 and seven.

The Pusan contingent, under Robert Dickson&#8217;s direction, practices most days at Camp Hialeah and travels once or twice a week to Taegu to work out at Camp Walker&#8217;s Kelly Field.

But being part of this rare alliance hasn&#8217;t been easy, particularly for three of Pusan&#8217;s &#8220;Magnificent Seven,&#8221; who not only face the commute to Taegu but live at Chinhae Naval Base, about an hour to the west of downtown Pusan.

A typical Taegu day for Brunner, Smith and freshman kicker-wide receiver Chris Rodriguez begins with a 6 a.m. wakeup at Chinhae. About 45 minutes later, they board a bus for school, which starts at 8 a.m.

&#8220;The hardest part is every day, having to bring all your equipment plus your school stuff,&#8221; Rodriguez said.

After a two-hour practice with their Taegu teammates, it&#8217;s back on the bus for the return trip south. Some players don&#8217;t get home until 8:30 or later.

The schedule isn&#8217;t easy for the players, but it&#8217;s just as tough for the coaches trying to blend the two groups into one cohesive team.

Though the rewards haven&#8217;t shown on the scoreboard, they&#8217;re there, players and coaches say.

Said Rodriguez: &#8220;This is a chance for the two schools to come together and play a sport without the rivalry. We work pretty well together. There&#8217;s unity on the team.&#8221;

The experience also has spawned talk Pusan might field its own team &#8212; which Camp Hialeah has not done since its youth services team folded in 1986.