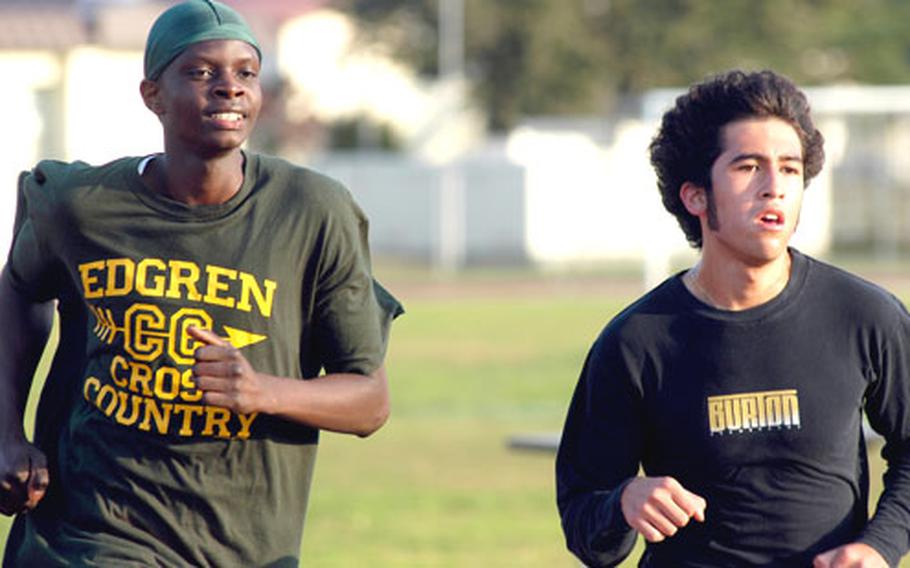 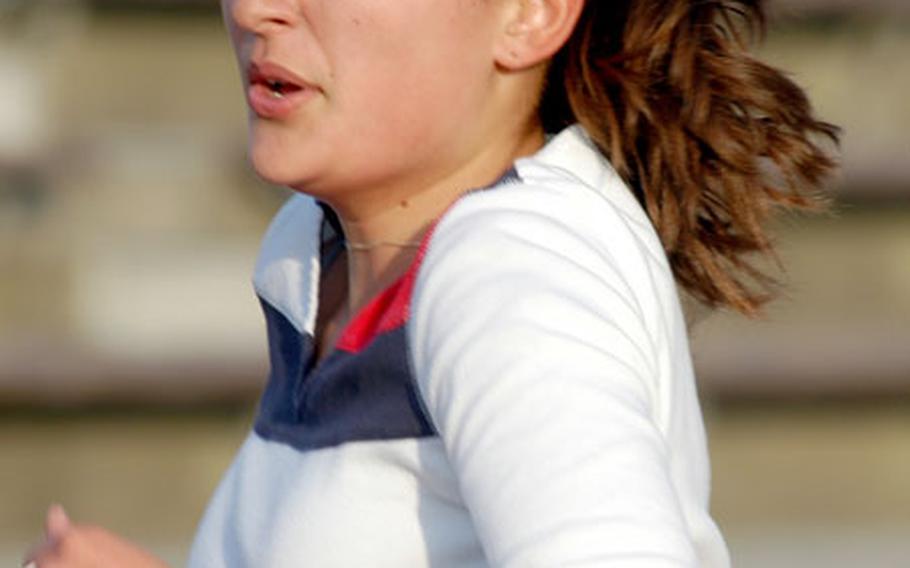 Freshman Jade Thrasher won the DODDS-Japan cross-country championship on Oct. 16, and this season has taken three first places, a second, a third and a fifth. (Jennifer H. Svan / S&S)

Edgren cross country coach Andre Thibert and his Eagles can be forgiven if they&#8217;re dreaming big these days.

Their three marquee runners, juniors Peter Kamau and Daniel Sanchez and budding freshman Jade Thrasher, consistently have finished at the top among Department of Defense Dependents Schools-Japan runners this season.

With Edgren hosting the Far East championship meet next month at Misawa Air Base, they hope to achieve the ultimate: Far East gold, in either the individual 3.1-mile race or team relay.

Thibert and his top three runners say they&#8217;re hoping to form a foundation for the future. So far this season they appear ready to do just that.

Kamau, who transferred to Misawa in the fall from Pensacola Naval Air Station, Fla., finished first three times, second twice and third once among DODDS runners. His best 3.1-mile time is 17:33, set on Oct. 9 at Sasebo. That time is 41 seconds better than the top time of the 2002 Far East meet on Guam.

Sanchez had been Edgren&#8217;s top male runner until Kamau arrived, but he still managed one victory, four thirds and a fourth against DODDS competition. He finished nine seconds behind Kamau at Sasebo.

Thrasher posted three firsts, a second, a third and a fifth in her six meets.

&#8220;This is certainly one of the strongest, if not the strongest team that they have ever fielded,&#8221; said John Thek, who has coached the Yokota High team since 1978. &#8220;Coach Thibert certainly has the program headed in the right direction.&#8221;

Whether that direction will lead to Far East gold depends on many things &#8212; starting with Edgren&#8217;s opposition.

Battle-tested Kadena of Okinawa will enter Far East as defending team champion, boasting Jon Turner and his season-best 17:20 among boys, and defending Okinawa island girls champion Niki Kauzlarich, whose 19:37 is third-best in the Pacific this season.

Another threat on the girls side is Pusan American senior Brieanna Carroll, who ran a 19:35 earlier this season.

At this point, however, Edgren lacks the depth that often sustains championship bids.

Edgren has the advantage of being the host team.