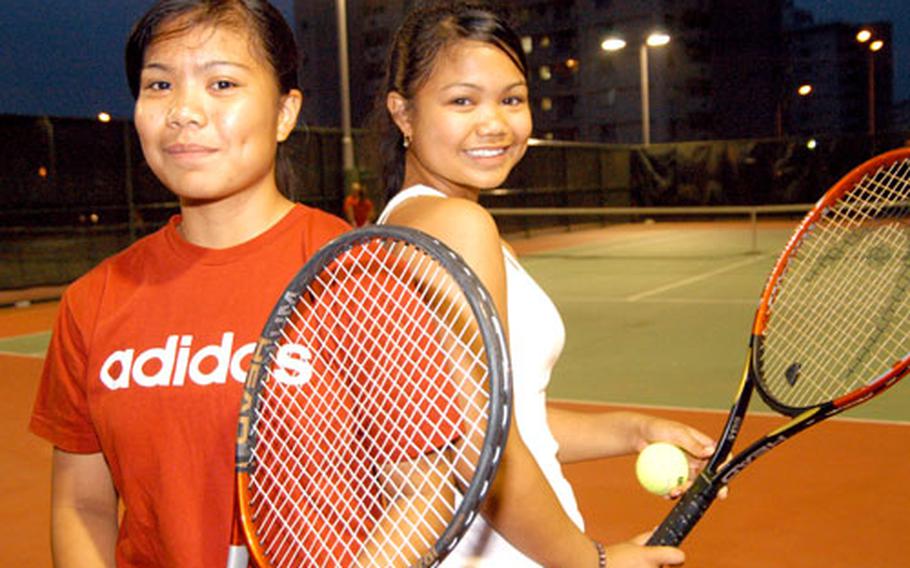 It&#8217;s the sort of situation that likely has coach Andrew Bogen giving daily thanks to whatever powers helped bring him to the helm of the E.J. King Cobras girls tennis team. His roster includes:

Leading the pack are the Suriben sisters, just 5 feet 3 but playing like giants. They&#8217;re each 6-0 in their singles matches and 4-0 as a doubles team.

The elder Suriben beat Osan American&#8217;s Amanda Reiff 6-1 for the Far East singles championship last year; she and Jemari Nimedez captured the doubles. And, she said, her game has improved.

&#8220;My serves have gotten stronger, my ground strokes are stronger and I&#8217;m going for more winning shots,&#8221; Suriben said, adding that she worked on backspins, backhands and other technique during the summer.

Riza&#8217;s game concentrates more on the baseline. She said she aims for consistency.

Hindie called Riza&#8217;s ground strokes better than those of her sister when Kristia was a freshman.

And tennis isn&#8217;t even their primary sport, they say. Kristia is a two-time All-Far East Class A basketball tournament selection and a two-time DODDS-Japan softball all-star, and Riza plans to join Kristia on the hardwood and diamond this year.

The sisters picked up rackets in their middle elementary school years largely due to Chief Petty Officer Cesar Suriben, who plays in tournaments on and off Sasebo Naval Base.

Consistency is the theme whenever he practices with them, Riza said: &#8220;Hit the ball back and forth without making mistakes. Good footwork. Always keep an eye on the ball and bending the knees.&#8221;

With the Far East tournament three weeks away, Nov. 6-10 at Guam&#8217;s Ninete and Tiyan Tennis Centers, neither players nor coach say they&#8217;re taking anything for granted.