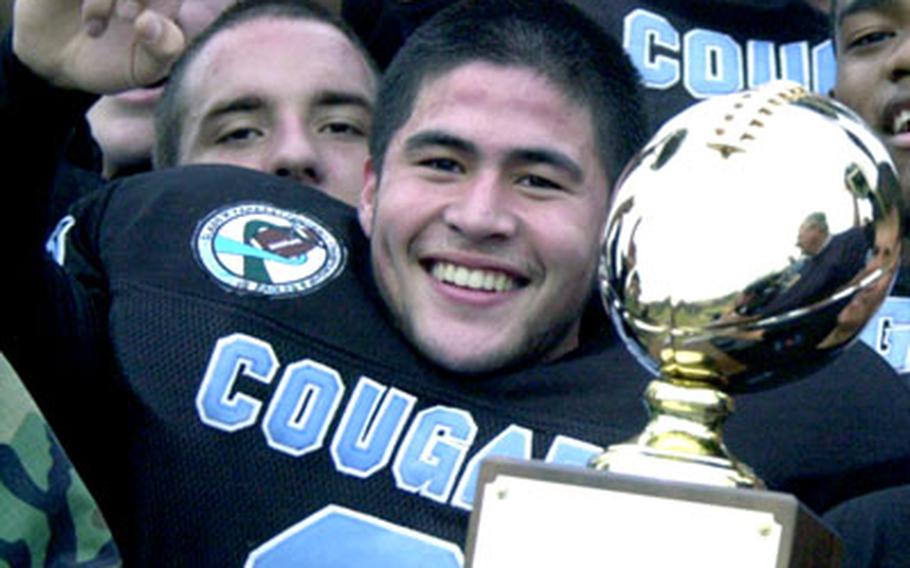 While some athletes&#8217; achievements can easily be discerned via win-loss records or statistics, others&#8217; individual glories or contributions to team success aren&#8217;t so quickly measured.

Suriben won all 18 of her singles matches and teamed with junior Jemari Nimedez to go unbeaten in doubles, capturing Far East tennis tournament crowns in each category Nov. 11 on Guam &#8212; the first such titles won by a DODDS-Japan player.Albaladejo didn&#8217;t pile up huge offensive statistics, but always seemed to come through with key plays at the right time on offense, defense and special teams to boost the Cougars to a Far East Class A title.For their efforts, Suriben and Albaladejo have been selected Stars and Stripes female and male Athletes of the Quarter for the fall sports season.

A three-sport star, Suriben was named All-Far East at last February&#8217;s Class A Basketball Tournament, and was named to All-DODDS-Japan teams in basketball and softball.

After losing in the first round of the 2004 Far East tennis tournament, Suriben worked on her game over the summer, transforming from a strictly baseline player into an all-around threat.

An example was the singles championship, a battle of unbeatens between Suriben and Osan American&#8217;s Amanda Reiff. Suriben easily dispatched Reiff 6-1, but it was how she accomplished it that pleased Kendall.

On the gridiron, coach Tony Alvarado said, he always came through in clutch situations, starting with a 55-yard halfback option pass for a touchdown to Mel Jones that rallied Osan past Taegu American 27-23 in DODDS-Korea League play on Oct. 1.

And he led wherever he was needed. As a sometime fullback, he plowed the road to help freshman tailback Will Rapoza gain a team-leading 543 yards on 85 carries with six TDs. He also saw time at linebacker and safety (17 tackles, 12 unassisted), and averaged 41.4 yards per punt, third-best average in the Pacific behind Guam High&#8217;s Ashton Adams (44.6) and Stefan Welch of Yokota (43.0).

His play against Edgren helped seal the Class A crown in the first year of DODDS-Pacific-sponsored Far East football playoffs. He kicked a 34-yard field goal, made a key defensive stop on fourth down and recovered a fumble to halt the Eagles&#8217; on their penultimate drive.

The rest of the 2005 Stars and Stripes fall sports quarter awards:

Coaches of the quarter: New to their respective posts, Jennifer Sharp coached the Taegu American Warriors to their first outright Korean-American Interscholastic Activities Conference title and their first Far East Class A volleyball title. Chance Wilson helmed the Warriors boys to their first KAIAC regular-season and tournament crowns.Team of the quarter: Riding the broad shoulders of junior fullback/linebacker David Motu, Kubasaki&#8217;s Dragons outlasted Kadena 2-1 in the Okinawa Activities Council best-of-three football championship series, then beat Guam High 32-12 in the Nov. 5 semifinal and halted Seoul America&#8217;s 25-game winning streak 34-14 in the Class AA title game at Kubasaki&#8217;s Mike Petty Stadium on Nov. 12.Most improved teams: After placing 13th in the 2004 Class AA volleyball tournament on Okinawa, new coach Al Garrido and the John F. Kennedy Islanders of Guam reached the Final Four in Seoul. American School In Japan football went from 1-7 in 2004 to 5-1 in 2005, including a 4-0 start, its best in school history.Outstanding program: KAIAC, which toted home a gaggle of DODDS-Pacific Far East tournament gold. Seoul American&#8217;s tennis and cross country teams made school history with their first Far East team titles, Osan American captured the Class A football championship and Taegu the Class A girls volleyball crown.Cross country runners, teams of the quarter: Senior Jon Michael Kwak of Tokyo&#8217;s St. Mary&#8217;s International Titans completed his third straight unbeaten season, running a region-best 16:44 in the Asia-Pacific Invitational on Nov. 11 at Guam&#8217;s George Washington High School. Led by junior Cathryn Furner, Seoul American&#8217;s girls went untouched all season, right through the Far East meet Nov. 7-8 at Misawa Air Base, Japan. Kadena&#8217;s Victoria Lyle became the second sister in the family to win a Far East individual 3.1-mile race.Tennis players, teams of the quarter: Seoul American&#8217;s Allen Chin matched Suriben by taking the boys singles and doubles titles in the Far East tournament. Joseph Shin and Seoul International&#8217;s boys won the KAIAC crown for the second straight season, and freshman Kanoka Hayashi, ranked No. 16 in Japan, helped American School In Japan to the Kanto Plain Association of Secondary Schools girls title.Volleyball players, teams of the quarter: Three senior middle blockers and tournament MVPs. Kelsey Hardeman paced Christian Academy In Japan to its third Class AA girls crown, as did Lynnette Grant for Taegu at the Class A level and Duri Balat for Taegu&#8217;s boys in their KAIAC title runs. The Hardeman family, Tine, his sons T.J., Tom and Todd and his granddaughters Kelsey and Tashia, is the most decorated in Far East tournament history in terms of total team titles, with 17, dating back to 1978.Football players, teams of the quarter: Motu and Kubasaki, Albaladejo and Osan American.Best performance by a transfer: Senior Alexandra Fernandez boosted Kubasaki&#8217;s girls volleyball team to its third Final Four finish in Class AA, taking fourth place. In the quarterfinals, she racked up 21 spike kills in 40 attempts and 15 block points in a 25-21, 19-25, 25-14, 19-25, 15-12 victory over host Seoul American.Best new face: Sophomore Larynzo Abernathy of Nile C. Kinnick broke a six-season Yokota stranglehold on the Japan Football League rushing championship, gaining 857 yards on 128 carries for the Red Devils (4-4).Best new event: The Far East football playoffs, which for the first time pitted teams from all Pacific regions in a chase for gridiron glory.Game of the quarter: Calvin Lasane&#8217;s 6-yard touchdown run rallied Seoul American past Yokota 13-10 in the Class AA semifinals Nov. 5 at Falcons Field, in a battle dubbed &#8220;Somebody&#8217;s &#8216;0&#8217; has got to go.&#8221; Yokota brought a Pacific-best 36-game winning streak and Seoul American a second-best 24-game streak into the contest.Play of the quarter: Seoul American&#8217;s winning streak ended the next week in large part due to some chicanery by Kubasaki sophomore Michael Bennett. The Falcons had just gotten within 14-8, when Bennett took the ensuing kickoff at the Dragons&#8217; 16, faked a reverse handoff to Tim Gardner, held the ball at his thigh and looked over his shoulder as if to monitor Gardner&#8217;s progress &#8230; then ran untouched 84 yards for a touchdown.Nominees for Stars and Stripes&#8217; Fall Athletes of the Quarter

x-automatically nominated as Most Valuable Player or individual champion of a DODDS-Pacific Far East or other Pacificwide tournament.