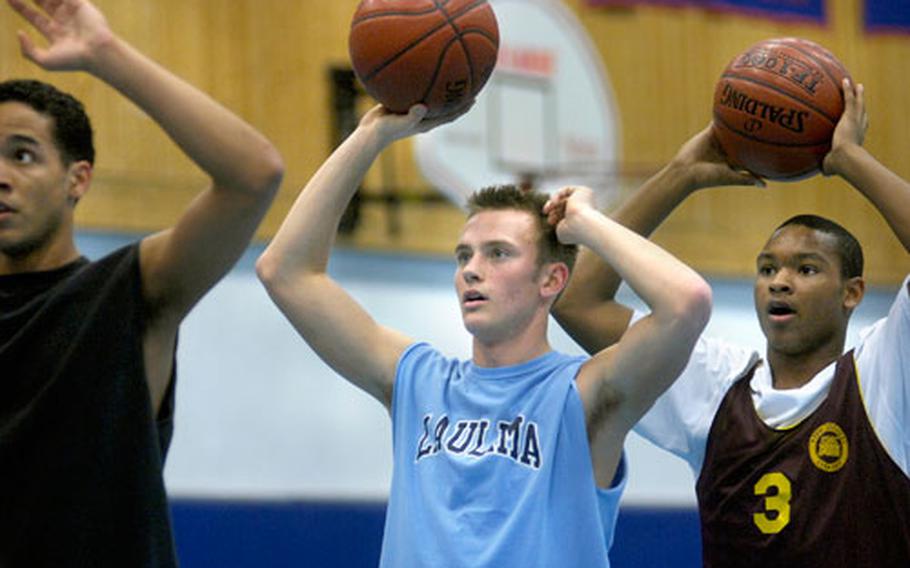 Ramstein senior Scott Sublousky, 18, center, sets up for a drill during practice with teammates Michael Wallace, right, and Brice Relaford on Jan. 17 at Ramstein. Sublousky wears a shirt wth the word "laulima," an Hawaiian word that means “many hands working together.” (Ben Bloker / S&S)

The Air Force brat born in Nebraska has lived around the world, including Hawaii, Colorado and now Ramstein, where he arrived in time to play his junior year.

&#8220;Coming over here, I told the guys about [laulima], and they thought it was pretty cool,&#8221; said Sublousky, who is also a standout on the football field and in the classroom.

Sublousky was voted to the DODDS all-Europe football team for the second straight year in 2007, and he holds a 3.8 grade-point average. He recently earned an academic and basketball scholarship to the University of Colorado at Colorado Springs.

Whether through bonding, great play or &#8220;laulima,&#8221; Ramstein has pulled out two tight games this season in which Sublousky has shined.

On Saturday, he scored a season-high 38 points, including two clutch free throws, to secure an 88-83 victory at Patch.

With around two minutes left, Ramstein was up 86-72. Then Patch went on a tear during its next four possessions, knocking down three three-pointers and a two-point basket. With three seconds left, Sublousky was fouled on the inbounds play, putting him on the foul line for a one-and-one situation. He drained both free throws to ice the game.

Sublousky also provided some late-game heroics Dec. 18 against defending Division I boys basketball champs Heidelberg. The 6-foot, 165-pound guard nailed two free throws in the final minute for two of his 31 points in a 60-59 Ramstein victory.

It was a victory he really wanted: In last year&#8217;s February title game, Heidelberg beat Ramstein by three points.

Not only is Sublousky the most talented player on the Ramstein team, he&#8217;s also the hardest worker, Tarnowski said.