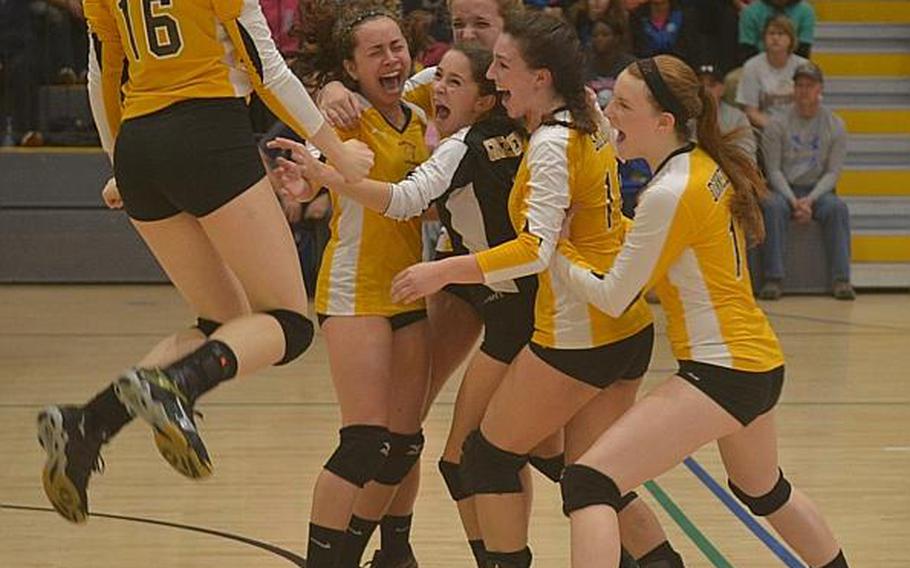 Players from Stuttgart celebrate immediately after winning the DODDS-Europe Division I championship Saturday, Nov. 7, 2015 at Ramstein Air Base, Germany. (Dan Stoutamire/Stars and Stripes)

Players from Stuttgart celebrate immediately after winning the DODDS-Europe Division I championship Saturday, Nov. 7, 2015 at Ramstein Air Base, Germany. (Dan Stoutamire/Stars and Stripes) Stuttgart's Julia Smith spikes the ball during the DODDS-Europe Division I volleyball championship match against Vicenza on Saturday, Nov. 7, 2015 at Ramstein Air Base, Germany. (Dan Stoutamire/Stars and Stripes) Members of the Stuttgart volleyball team huddle before their DODDS Division I championship clash with Vicenza at Ramstein Air Base, Germany, Saturday, Nov. 7, 2015. (Dan Stoutamire/Stars and Stripes) Gabriella Campos, wearing white, of Vicenza, tries to motivate her teammates during the DODDS-Europe Division I volleyball championship match against Stuttgart at Ramstein Air Base, Germany, Saturday, Nov. 7, 2015. (Dan Stoutamire/Stars and Stripes) 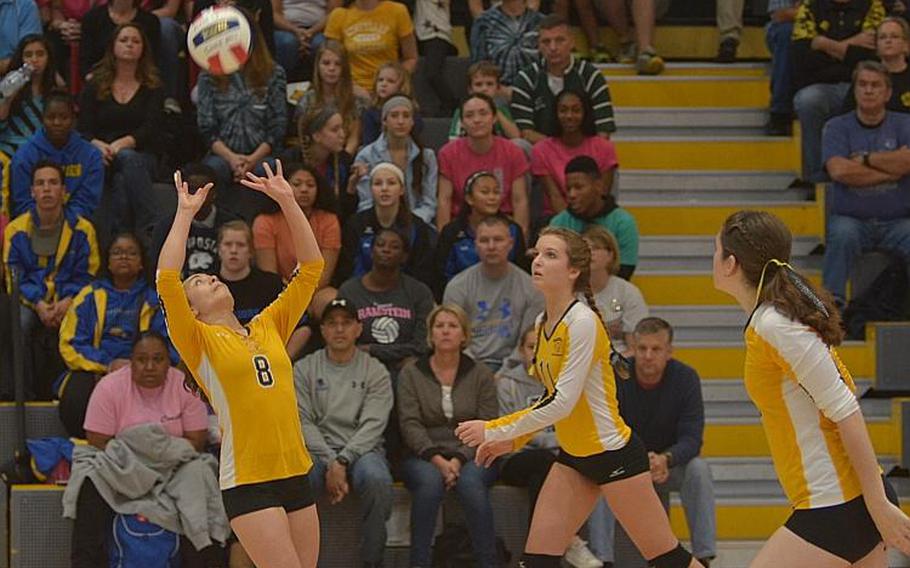 Stuttgart's Ashley Colon sets up her teammates during the DODDS-Europe Division I volleyball championship match against Vicenza at Ramstein Air Base, Saturday, Nov. 7, 2015. (Dan Stoutamire/Stars and Stripes)

RAMSTEIN AIR BASE, Germany – A quick scan of the previous DODDS-Europe girls’ volleyball champions dating back to 1975 reveals almost the unthinkable: No Patch.

This year’s team, now playing for a newly-built school renamed Stuttgart, finally ended that decades’ long title drought with an exciting three-set victory over Vicenza – 26-24, 25-22, 25-11 – to win the Division I crown at the 2015 volleyball championships Saturday.

“It feels great,” said Stuttgart junior Julia Smith, who had four kills and three digs. “We worked so hard this season. We finally pulled it out in the end.”

But it wasn’t just the thrilling win against a dogged Vicenza team that made this year’s team so special.

It was “everything,” Stuttgart coach Michael Rubino said after the match, keeping his choice of words succinct while trying to keep his emotions in check.

“It’s just that they play together so well,” he added. “We knew we had a good team from the very beginning” of the year.

The team’s talent was spread around, from a pair of skilled outside and middle hitters to the steady libero and setter.

“I was able to have all of those pieces put together,” he said. “Normal teams don’t have that luxury. We’ve had them for three years now.”

But the tournament was no cakewalk, even for the capable Panthers.

The team beat the Royals in a grueling five sets Friday, an effort that could have worn the Panthers out physically and emotionally. But Greenberg said the Panthers were ready to go by Saturday.

“We got to sleep in, so we got our rest,” said Greenburg, who was named the Division I tournament Most Valuable Player and tallied 12 digs in the match.

Vicenza, coming off a hard-fought, five-set win the day before itself in a match against the defending Division I champion Wiesbaden, didn’t appear tired.

The Cougars made things competitive. The first two sets were decided by a combined five points. In the first set, Stuttgart’s Emily Ortwein stifled the Cougars’ attempt to go up 1-0 in the match. The senior’s ace finished off the set and perhaps stemmed the tide of game-changing momentum.

The second set was almost as taut. The two sides fought to a 22-22 tie before Stuttgart senior Jaxen Godfrey nailed a kill to put the team up by one. The Panthers then put two more points on the board in quick succession to finish it out.

Vicenza, third at the tournament last year, was also looking for its first gold at Europeans but will have to wait until at least next year to try again.

“We were right there. We just fell short,” said Vicenza coach John Kohut.

Vicenza junior Adrianna Lovelace, who landed all 10 of her serves and added one ace, four kills, two digs and three blocks to her game, said she was proud of how her team played.

“We came into this game having Stuttgart beat us the past two times we played them,” she said. “And we definitely gave them a run for their money. I’m really proud of the way we hustled and the way we worked together.”