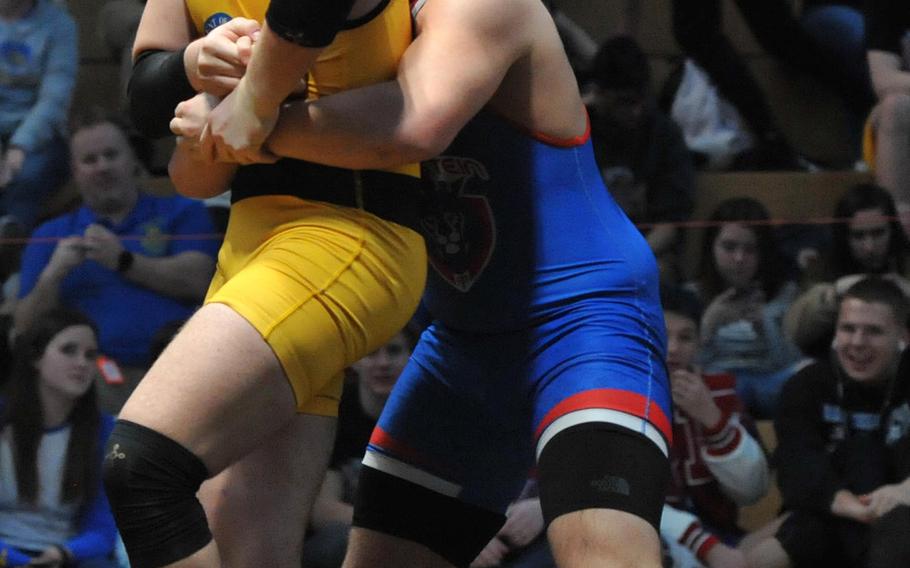 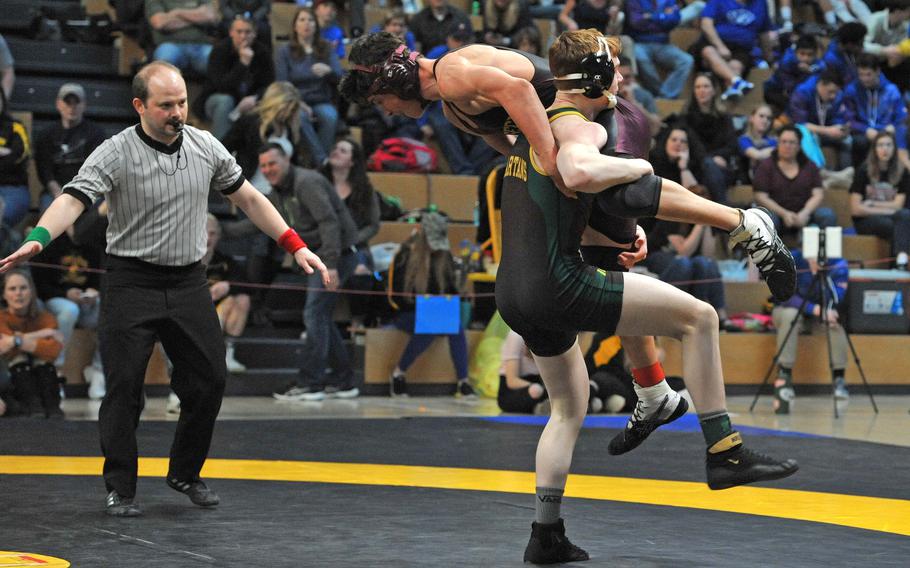 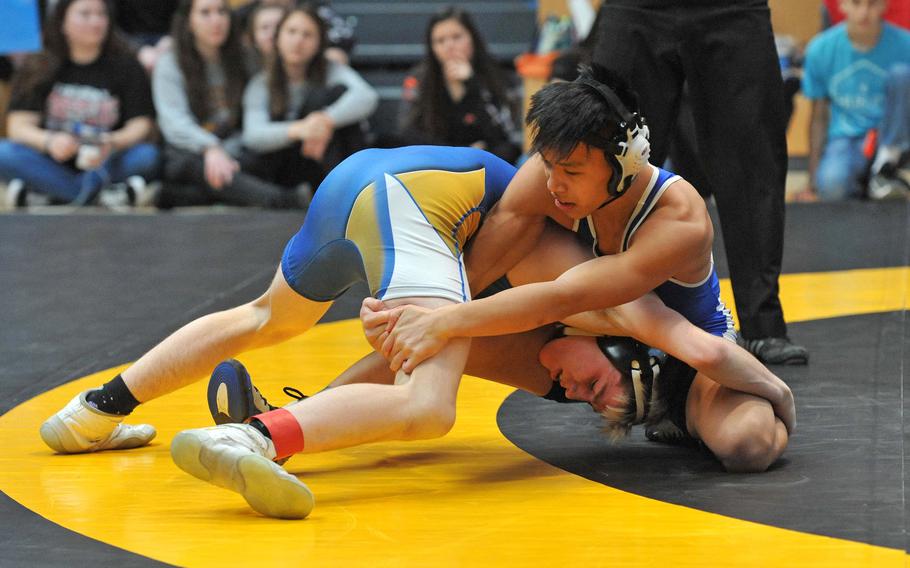 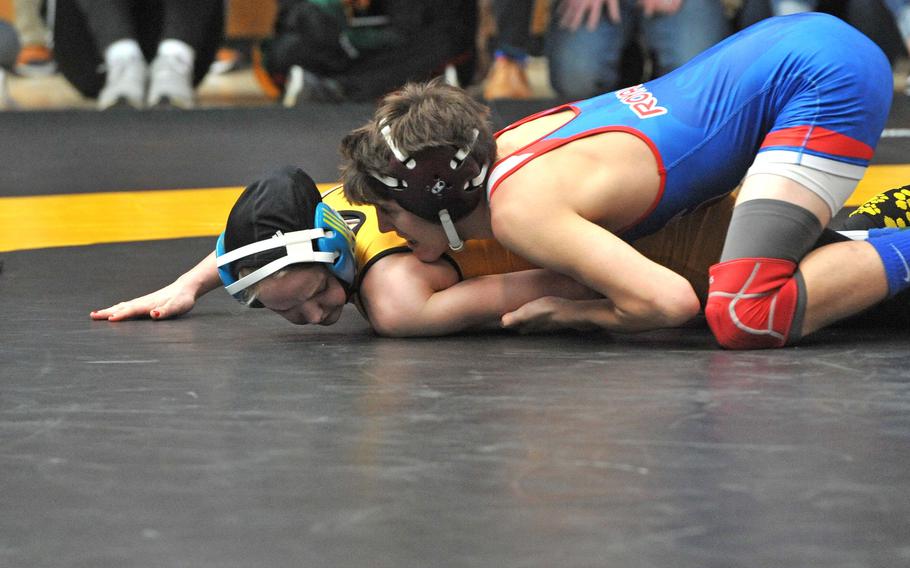 Ramstein's Andres Hart puts the pressure on Stuttgart's McKinley Fielding in an exciting 106-pound championship match at the DODEA-Europe wrestling finals. Hart defended his title. Had Fielding won she would have been the first female champion in DODEA-Europe history. (MICHAEL ABRAMS/STARS AND STRIPES)

WIESBADEN, Germany -- The Stuttgart Panthers won their sixth consecutive DODEA-Europe Division I wrestling championship Saturday at Clay Kaserne Fitness Center, fighting off yet another challenge from the rival Ramstein Royals to extend their dynasty.

Stuttgart fielded five European champions and seven finalists to claim the points edge over Ramstein. The Royals, who qualified 28 wrestlers for the European tournament as compared to Stuttgart’s 22, produced three champions from a set of eight finalists.

Rota, the only Division II team represented in the finals, claimed that division’s team title. Sigonella cruised to the Division III title with two champions and three finalists.

While Stuttgart and Ramstein again headlined the proceedings, a large swath of DODEA-Europe was well-represented in Saturday’s slate of 14 European championship matches. A total of 10 schools from five countries placed wrestlers in the championship round.

Hart pinned Fielding in the first round of last year’s championship match, but the two had exchanged wins and losses this winter. Fielding claimed a 9-8 decision when the two met Saturday morning in the final round of preliminary bouts.

“Constant pressure the whole match,” said Hicks, who admitted he was “frustrated” when his pinfall attempts eluded him in the first two rounds but said he was certain he’d notch the pin as he “kept on trying and trying.”

That’s a fitting microcosm of Hicks’ emphatic arrival on the DODEA-Europe scene.

“It’s exactly what I expected,” Hicks said of his first European tournament.

120: Wiesbaden’s Brandon Wells thrilled his hometown fans with a steady 9-3 defeat of Rota’s Philip James Rivera, in the process earning the Warriors’ only title of the day.

“I just wrestled my style, stayed with it and matched his pace,” Wells said. “He was fast.”

While fans of nearly every school crowd the stands at Wiesbaden for the finals, Wells felt a particular motivation to impress as a member of the host Warriors.

“It was a lot of pressure, but it was fun,” Wells said. “You’ve got to thrive under pressure.”

Rivera claimed runner-up in the 120-pound bracket for the second year in a row.

The match was a rare meeting of two reigning European champions. Mackie, then representing Ramstein’s crosstown rival Kaiserslautern, won the 120-pound title a year ago, while Allen took gold at 113 pounds. The two champs were part of a brutal bracket that also included Sigonella’s Munro Manning, who lost to Allen in last year’s 113-pound title match, and Stuttgart contender Carter Hanes, a semifinalist at 120 last year who nearly knocked off Allen in a Saturday morning semifinal.

Mackie scored a third-round takedown to erase Allen’s one-point advantage and replace it with his own.

132: Sophomore Benjamin Latimer delivered the first individual wrestling championship in Sigonella Jaguars history with a 9-2 decision over Ramstein’s Christian Griffith, a fact he exuberantly announced in his post-match celebration.

Latimer and Griffith survived the most competitive semifinal round of any of the event’s 14 weight classes. Latimer took an 11-5 decision over Hohenfels’ Joshua Robles, while Griffith edged Stuttgart’s Ryan Morrow 12-10. Sixteen of Saturday’s 28 semifinal matchups were decided by pinfall; five more were determined by a major decision or technical fall.

Appropriately, the final was equally arduous as Griffith pushed Latimer to his limits.

“I worked so hard for it,” Latimer said. “He was a tough match.”

138: Stuttgart senior Benjamin Fielding completed one of the most accomplished careers in DODEA-Europe wrestling history with a 16-second pinfall victory over Vilseck’s Christian Cimino.

Fielding wraps up his DODEA-Europe career without a loss and with four European championships across four different weight classes.

No Fielding match lasted past the first round this season, a trend that continued in his overwhelming seven-match run at the European tournament. Fielding earned his seven pinfall victories with an average time of 41 seconds.

Smith said his trip up the scale “just kind of played out.” Smith explained that he lifted a lot of weights and bulked up over the summer to get “big for football,” and appeared headed for the 138-pound bracket on the mat. But with Fielding occupying that spot, Smith needed to jump up yet one more weight class. On Saturday, he found himself following Fielding at a key juncture in the annual battle against Ramstein.

“Do my things, do the best I could,” Smith said of his approach to the final bout. “Just leave it all out on the mat.”

Swart was Ankara’s only entrant in the European championship meet, but he advanced far enough to earn the school a third-place finish in the Division III team standings.

152: Anthony Llamido put the Vilseck Falcons in the championship column with a defeat of Stuttgart’s Christian Just. Llamido earned the pin at two minutes, 53 seconds.

Llamido was one of the tournament’s most dominant competitors, recording four pinfalls and a technical fall in his perfect 5-0 preliminary run. Another pin in the semifinal round earlier Saturday set Llamido up for his evening triumph. Llamido’s title gave Vilseck a strong third-place finish in the Division I race.

160: SHAPE senior Sean Kilrain played to his strengths to secure a long-awaited title for the Spartans. Kilrain took a 22-7 technical fall win over Vilseck’s Hyrum Draper.

Whereas many wrestlers prefer to operate on the ground, Kilrain has discovered that his speed and quick shooting ability makes him difficult to resist from a standing base. That strategy earned him a 24-0 regular-season record, and he saw no reason to depart from it this weekend.

“I’ve learned that I’m pretty dominant from my feet,” Kilrain said. “Taking him down, letting him up just to rack up those points.”

The Falcon-Spartan clash was one of just two championship matches to not include a wrestler from Ramstein or Stuttgart.

170: Sigonella’s Amari Pyatt delivered Sigonella’s second-ever individual European championship, and its second of the day, with a pin of Ramstein’s Owen Peterson at three minutes, 44 seconds.

Pyatt entered the tournament a favorite to claim the Jaguars’ historic first title, though he was beaten to the spot by teammate Latimer. The Jaguar junior, a recent arrival from Nebraska, pinned every opponent he encountered at the European tournament.

Pyatt tied with Spangdahlem’s Hicks for the tournament’s award of most outstanding wrestler.

182: The tensions between the Panthers and Royals reached their apex here as the title bout was halted in the second round. Stuttgart’s Wesley Coglianese won by default and claimed the championship after he was injured by an illegal move from Ramstein’s Gabe Davis.

The match was an example of the upward mobility available to rising DODEA-Europe wrestlers.

Both fought their way into the championship match after competing in the fifth-place round a year ago, Coglianese at the 152-pound level and Davis at 170.

195: Connor Boyer picked up a key win for the Panthers in the last of this year’s three Stuttgart-Ramstein finals. The Stuttgart sophomore outlasted Ramstein’s Nicholas Mooney in a 7-5 decision.

The run of two consecutive Stuttgart individual titles, its second such streak of the day, was a key moment in swinging the title in Stuttgart’s favor for a sixth straight season.

220: Ramstein’s Theodore Ward used a final-period surge to claim an 8-2 victory over Naples’ Augusto de Sousa Matos for the final Royal title of the day.

The two were tied with a point apiece in the third period when Ward slapped a headlock around his opponent and wrenched him into a pinning predicament. De Sousa Matos avoided the pin but spent most of the final minute locked in Ward’s powerful grasp, breaking free with insufficient time remaining to put together a rally of his own.

Ward settled into the hold and resisted the urge to push harder for the pin, wary that he might leave himself vulnerable to the counter if he did.

“I was just comfortable staying there,” Ward said. “I knew if I would move, try to go for the pin, he would just take me out.”

The win was a jump in weight class and performance for Ward, who finished in sixth place at 195 pounds last year.

285: John Carroll capped another Stuttgart championship with a decisive defeat of Sigonella challenger Anthony Perroni, retaining his heavyweight title with the pin just 84 seconds into the match.

Carroll, the 2018 Stars and Stripes wrestling Athlete of the Year, completes his career as a three-time European champion at 285 pounds.