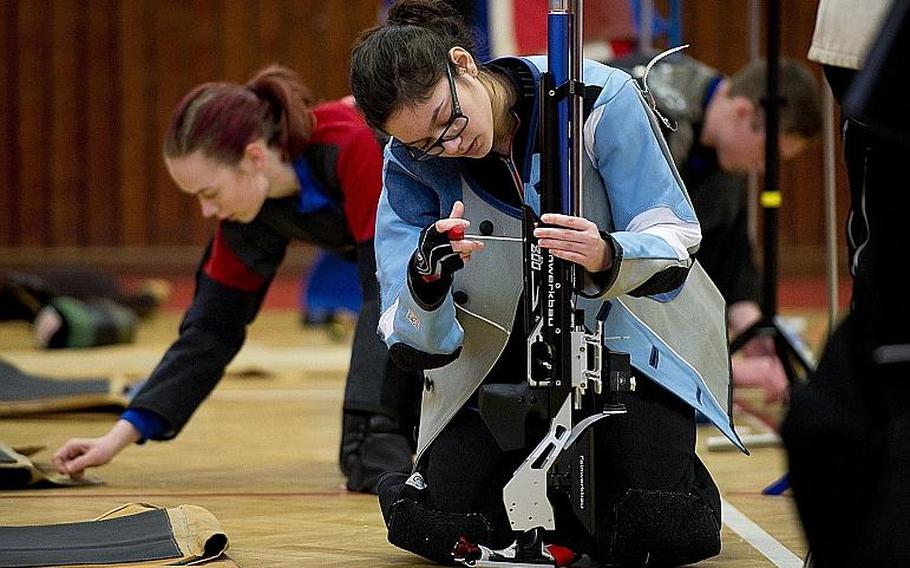 Both of the Stuttgart Panthers’ winter sports dynasties are at risk as the DODEA-Europe season opens this weekend. One’s just at a little more risk than the other.

Stuttgart’s wrestling and marksmanship programs will each pursue their sixth consecutive DODEA-Europe team championships this winter, but they’ll do so under very different circumstances. While the Panthers’ wrestling team is packed with the depth and experience they’ve enjoyed throughout their half-decade reign, the school’s marksmanship program is starting over.

None of the members of last year’s senior-heavy marksmanship squad are back this year, leaving seasoned coach Raul Pinon and a group entirely composed of first-year shooters, including sophomore team captain Karla Redolosa, to carry the burden of the Panthers’ historic success.

One proven Panther champion remains active in DODEA-Europe competition, albeit for a different school. Junior Isabella Ploechinger, a key member of the 2017-18 Panther title squad and the individual runner-up at last year’s European finals, makes the switch to Kaiserslautern to boost the Raiders’ steadily rising program.

“This is probably the best starting varsity I’ve ever had,” said Kaiserslautern coach Robert Meyer of a group that also includes experienced performers Julianna Hosey and MacKenzie Cuellar. “We are very optimistic about this year.”

The Stuttgart wrestling squad, meanwhile, will face plenty of challenges this fall, but a dearth of proven leaders doesn’t figure to be among them.

Benjamin Fielding and John Carroll are both seniors, multiple-time European champions and former Stars and Stripes wrestling Athletes of the Year, giving head coach Norm Matzke a very solid foundation to extend the Panthers’ reign. Fielding has won European crowns at 120, 126 and 132 pounds over his first three seasons, and will look to complete that pattern with a championship at 138 pounds this winter. Carroll is eying a third heavyweight title.

The Panthers will open the regular season on the turf of their most consistent rival, the Ramstein Royals, in a seven-team Saturday meet that also includes Baumholder, Berlin, Hohenfels, Vilseck and Wiesbaden. Ramstein boasts a pair of reigning champions in Andres Hart and Kaiserslautern transfer Conner Mackie, but coach Thomas Wright said the Royals overall are a “very young team with limited experience.”

The depth of European competition isn’t limited to Germany, as season-opening meets at Lakenheath and Aviano will demonstrate Saturday.

The regular season runs through Feb. 2, including a month-long break for the holidays. Sectional qualifiers follow on Feb. 9, leading up to the European championship meet Feb. 15-16 at Wiesbaden.