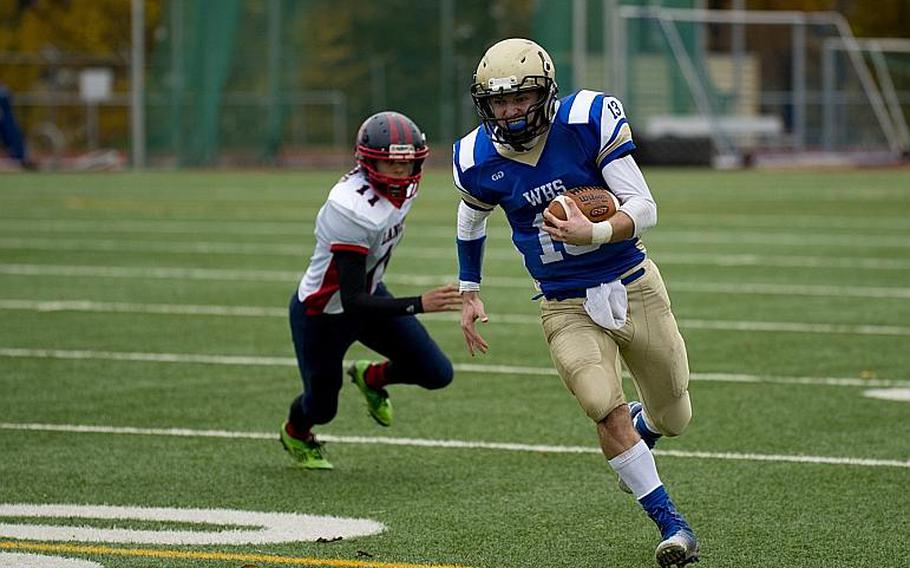 Wiesbaden Warrior Eric Arnold runs the ball during the DODDS-Europe Division I football semifinals at Wiesbaden, Germany, on Saturday, Oct. 31, 2015. (Michael B. Keller/Stars and Stripes )

Wiesbaden Warrior Eric Arnold runs the ball during the DODDS-Europe Division I football semifinals at Wiesbaden, Germany, on Saturday, Oct. 31, 2015. (Michael B. Keller/Stars and Stripes ) 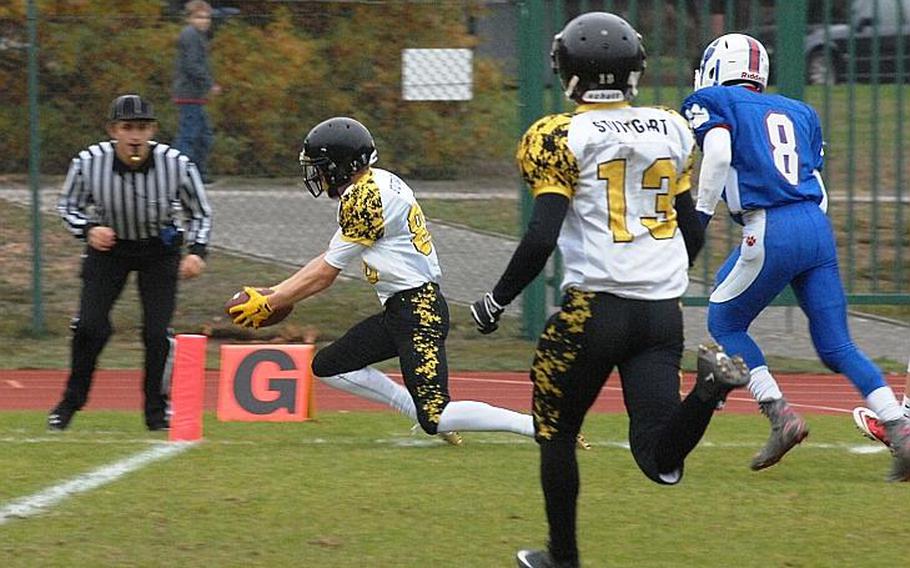 Stuttgart receiver Sean Loeben crosses the goal line with the only touchdown of the first half in the Panthers' 10-8 defeat of the Ramstein Royals on Saturday, Oct. 31, 2015. (Gregory Broome/Stars and Stripes)

The Stuttgart Panthers have experienced both sides of this football truism over the last two weeks. The upshot is that they’ll play the Wiesbaden Warriors for the DODDS-Europe Division I championship on Saturday at 7 p.m. CET at Kaiserslautern High School. But how that came to be is a tale that encompasses all the manic unpredictability of the sport.

On Oct. 23, Stuttgart didn’t make the plays. Opportunities passed the Panthers by time and again, and they took a 14-10 loss to Wiesbaden after the Warriors did make the play – a second-half game-winning touchdown strike from Eric Arnold to Carlos Ortiz. The loss left Stuttgart at 2-3 and at mortal risk of missing the postseason; spared only when the weekend’s other regular season finales played out in its favor.

On Oct. 31, Stuttgart made the plays – and that’s a severe understatement. After falling behind 8-7 late in a semifinal game on the turf of undefeated defending champion and archnemesis Ramstein, the Panthers produced one of the more thrilling sequences in DODDS-Europe history – a pitch-perfect hook-and-ladder play that set up a game-winning field goal by Kat Farrar as time expired.

All told, Stuttgart gave itself a chance to both of its games over the last two weeks. The Panthers won one.

Now the task is to win one more. The question is: will the Panthers make the plays?

This regular season was a roller coaster for all six teams in Division I.

Kaiserslautern finally looked like a playoff team after it was eliminated from postseason contention. Vilseck trudged home as one of the best teams to miss the playoffs in recent memory. Lakenheath broke a long playoff drought and was rewarded with a double-digit playoff loss. Ramstein stayed largely aloof from the craziness only to watch its season end in the craziest turn of events of all.

The two teams that will represent Division I on Saturday weren’t exempt from its crests and troughs.

A preseason darling, Stuttgart opened its season with an impressive 18-9 win over Wiesbaden in a game that didn’t count towards postseason positioning, followed by a rout of Vilseck that further inflated the growing hype around the Panthers, led by running back Myles Bryant and do-everything star Jamie Ensley.

Then the bubble burst – three losses in four games, interrupted only by a win over last-place Kaiserslautern. The Panthers scored just 16 points over those three losses, calling into question the team’s ability to simply score enough points to compete. As dramatic as the win was, the 10 points produced in their 10-8 semifinal defeat of Ramstein didn’t entirely dismiss such doubts.

Wiesbaden strode into the 2015 season nursing a pair of body blows: the stunning shutout loss to Ramstein in the 2014 title game that cost them a repeat title, and a noticeable dip in its overall size and talent level. The opening loss to Stuttgart didn’t help the healing process.

Deshon Barrow. They even avenged that loss to Stuttgart on homecoming night, setting up a home-field romp over Lakenheath.

Causes for concern cropped up in the interim, however. Prior to the defeat of Stuttgart, the Warriors lost consecutive games to Vilseck and Ramstein in which they managed just 17 combined points. And the two scores they managed in their 14-10 win over Stuttgart would have been equally discouraging had the Panthers produced a fourth-quarter scoring drive.

As such, Saturday’s game is likely to come down to – you guessed it – making plays. Both coaches grasp that it’s too late in the season to do anything but field the team that got them here, and hope it will perform closer to the peaks it reached this season than the valleys it climbed out of.

“We focus on the fine details, add a few wrinkles into some of our plays and try and perfect what we do on both sides of the ball,” Wiesbaden coach Steve Jewell said. “We maintain a sense of normalcy to our practices.”

Stuttgart coach Billy Ratcliff has the same approach, referring to the week of practices leading up to the championship game “business as usual.”

“We won’t change our normal weekly routine,” Ratcliff said. “We are just trying to maintain focus on the task at hand.”