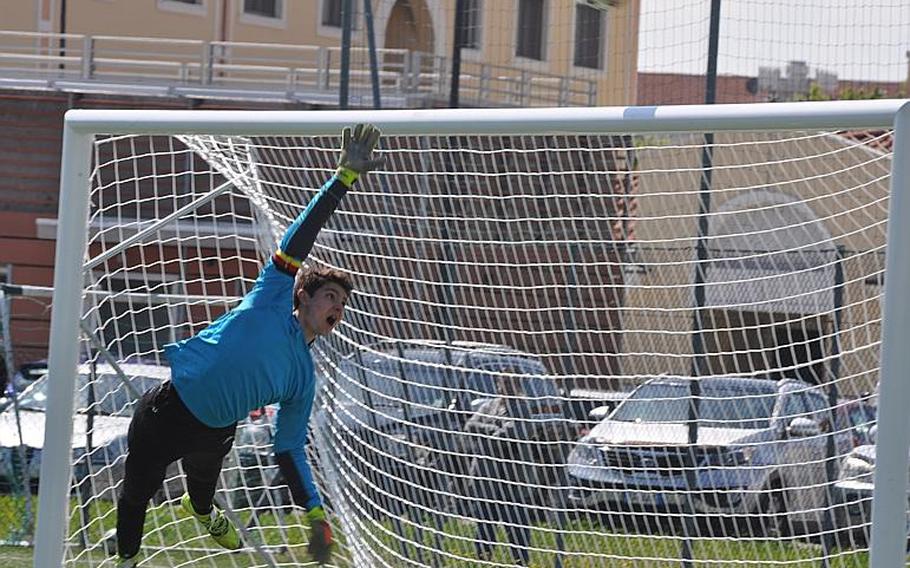 Buy Photo
Vilseck goalkeeper Tim Simmons goes flying to try to stop a goal in the Falcons' 2-1 loss to Vicenza on Friday. (Kent Harris/Stars and Stripes)

Buy Photo
Vilseck goalkeeper Tim Simmons goes flying to try to stop a goal in the Falcons' 2-1 loss to Vicenza on Friday. (Kent Harris/Stars and Stripes) 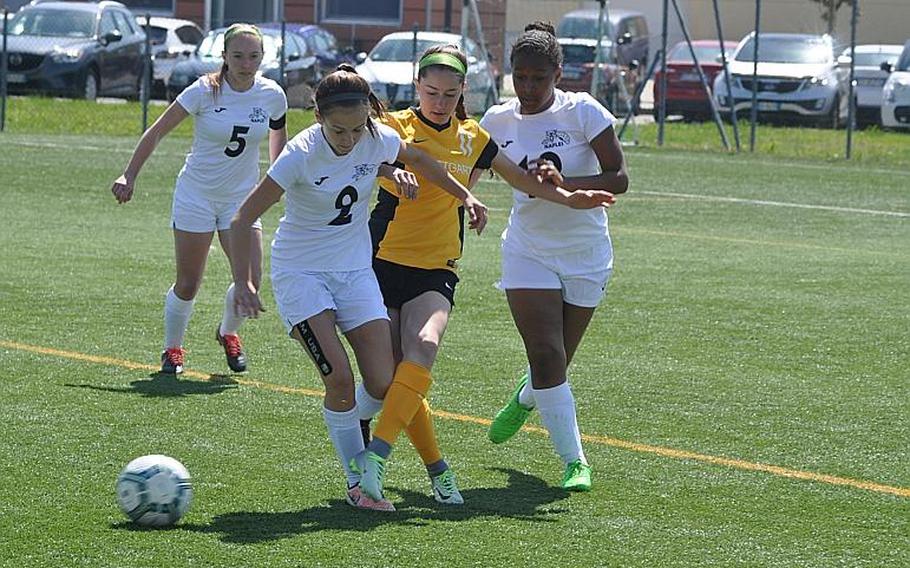 Buy Photo
Vicenza freshman Cameron Cao takes one of her three shots on goal Friday - the only one that didn't go in - in the Cougars' 2-0 victory over Vilseck. (Kent Harris/Stars and Stripes) 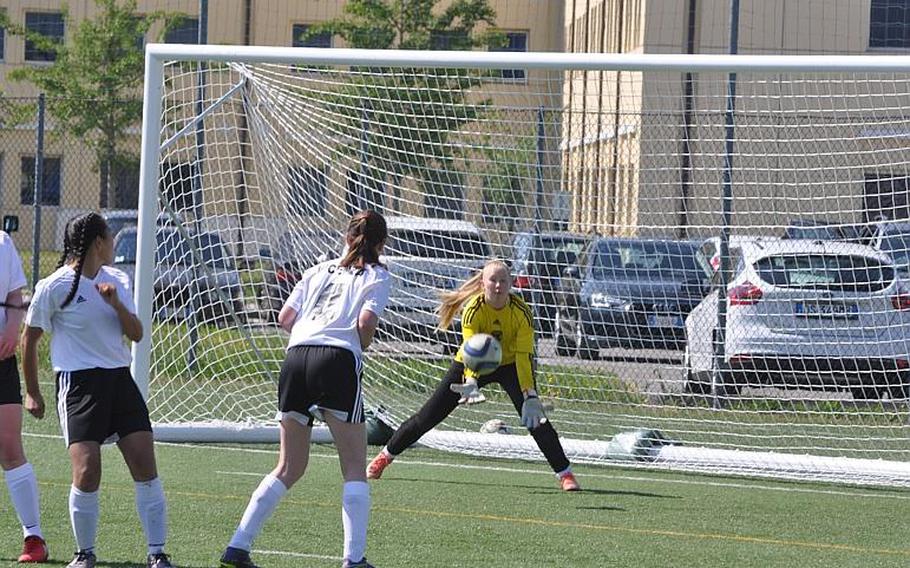 Buy Photo
Members of a wall of Vicenza defenders turn around to watch goalkeeper Rhiannon Merkel catch a free kick and prevent a goal Friday in the Cougars' 2-0 victory over Vilseck. (Kent Harris/Stars and Stripes) 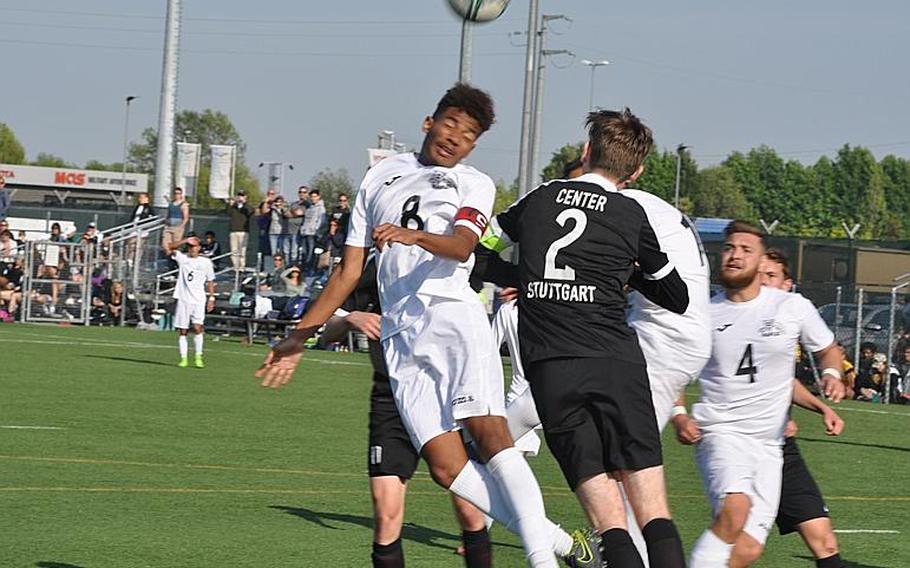 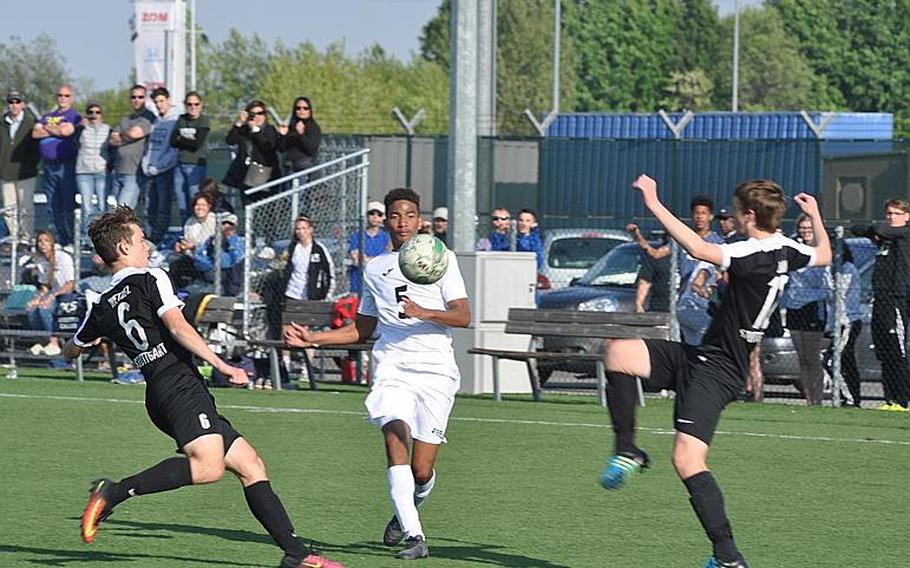 Buy Photo
Naples' Colton Stewart follows the ball as Stuttgart's Kai Wetzel, left, and Aidan DeHan each try to kick it in the Wildcats 2-1 victory on Friday. (Kent Harris/Stars and Stripes) 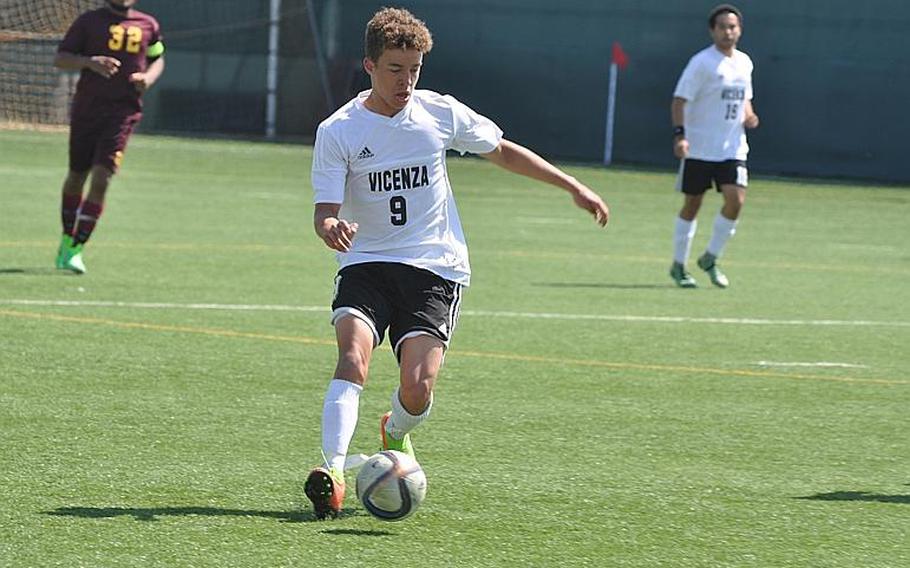 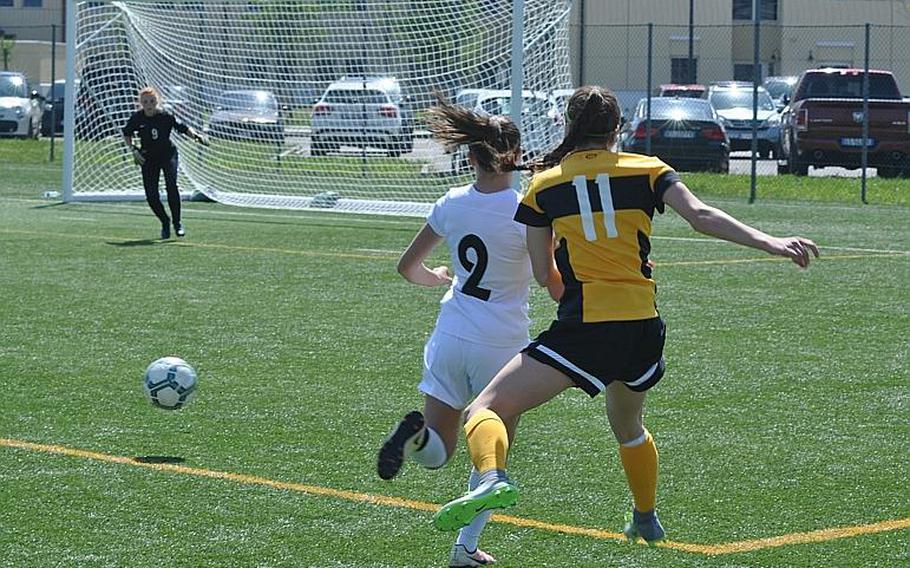 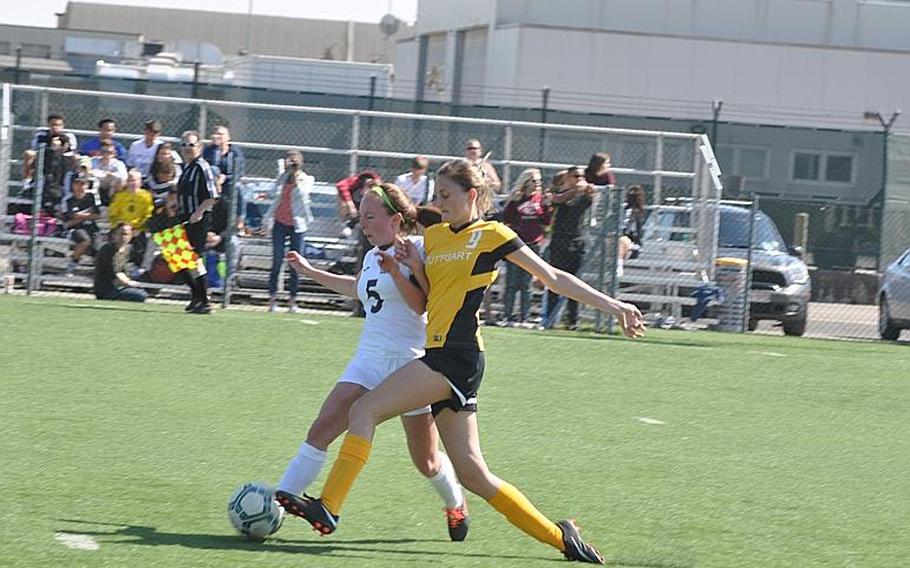 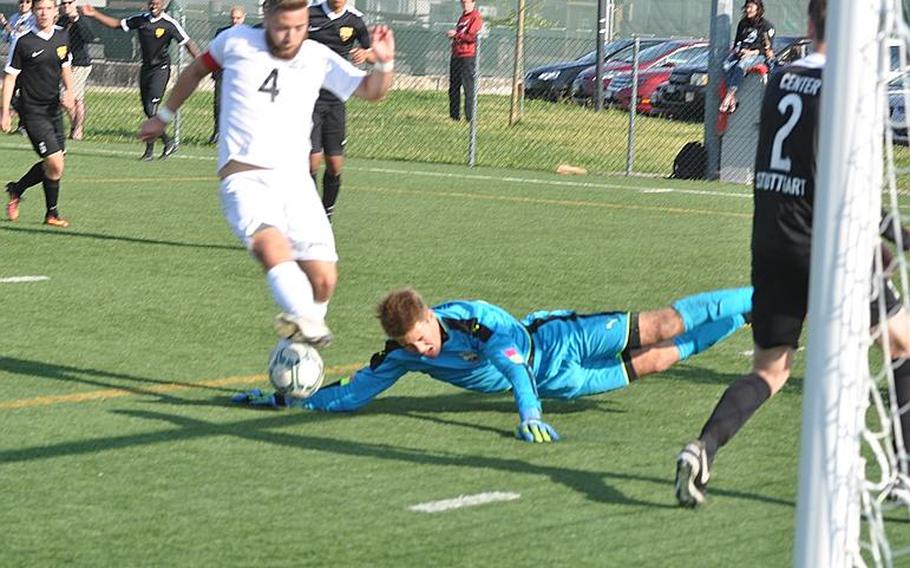 Buy Photo
Naples' Matteo Pugliese tries to keep the ball in play while Stuttgart goalkeeper Evan Stuber sprawls to save it in the Wildcats' 2-1 victory on Friday. (Kent Harris/Stars and Stripes)

VICENZA, Italy – Three of the four soccer games Friday between the annual Division I regular season north/south battle were close enough they could have gone either way.

But it was the other contest that might be the most relevant when it comes to predicting one of this year’s champions.

Naples gallantly battled Stuttgart to a 2-2 tie at the half. But the relentless Panthers turned it up a notch – or perhaps several notches – in the second 40 minutes to emerge with an 8-2 decision that cemented Stuttgart as the team to beat again this year.

It was a bit difficult to see that at halftime, though.

Naples brought its defenders to the midfield, forcing the Panthers to make long solo attacks, time their passing expertly or turn the ball over.

Senior Alexa Smith admitted she and her teammates “were frustrated in the first half. Not a lot of other teams have done that to us.”

Smith broke free early in the second half, though, for a shot on goal. Naples goalkeeper Katherine Abresch deflected the shot, but Emily Smith was in the right place for the Panthers to take the rebound and fire it in for her second goal of the day.

Lexi McLellan ignored the defensive tactic by firing away – and scoring – from about 35 yards out and the Panthers had a cushion. Alexa Smith, committed to play next season for Division III Methodist University, then struck three times, each time maneuvering through several defenders in the middle of the field. McLellan added another score and the game was over.

Coaches and players from both teams said they wouldn’t be surprised to meet again in the European championship game.

And Lucy hinted there might be another surprise or two in store for the Panthers.

“But I’m not going to tell you what they are,” she said, smiling.

Vicenza 2, Vilseck 0: Freshman Cameron Cao scored once with each foot as the Cougars opened the day by getting their first D-I victory of the season.

Vicenza coach Adam Ridgely said his team worked on new offensive and defensive strategies this week in practice and the team executed both Friday.

“It’s nice to see that happen,” he said.

Vilseck’s Adely Huezo said the short turf field, temperatures about 30 degrees warmer than north of the Alps and a long bus ride might have made some difference.

“But we’re not making any excuses,” she said. “We would like to see Vicenza again, though.”

BoysNaples 2, Stuttgart 1: Some physical play similar to the girls matchup had both coaches unhappy with some calls. But it was the final whistle signaling the end of play that was the cruelest for the Panthers, who were setting up for a corner kick.

Stuttgart managed very little offense – especially in the first half, when it attempted only one shot on goal – but was still in it thanks to some key plays on defense and the booming right foot of goalkeeper Evan Stuber, who routinely sent the ball further into the Naples defense than his peers could muster on their own.

With the score tied at 1-1 in the second half, Stuber saved an initial shot by tipping it up off the cross bar. But the ball bounced to Nate Stewart and the Naples senior headed it into the goal for his second score of the day.

He and his brother Coleton transferred in to Naples this season from Texas and have boosted the attack according to coach Dirk Lambertson, whose team lost 12 seniors and six others from last year’s squad.

Stuttgart’s Phoenix Ajyeman came off the bench to score his team’s goal early in the second half and the Panthers fell to 1-2.

“I think it’s a character challenge to the boys now,” coach Chris Kelly said of the season.

Vicenza 2, Vilseck 1: All three goals came on penalty kicks and the Cougars had the final two of them.

Alex Rodriguez opened the scoring for Vilseck, but it wasn’t long before Vicenza tied it on Richard Poropat’s boot. Marco Peruzzo had the game winner early in the second half and neither team could put it in the net after that.

Vilseck coach John Sabala said his team has given up six goals in three games this year and half of them came from penalty kicks. “And the rest from mistakes that are correctable. So we’ll get there.”

Vicenza coach Roland Sturk said he liked most of what he saw. “We played smarter today,” he said, espousing a strategy of “sit back, let them come to us, then counter.”

Vicenza takes on Stuttgart and Naples plays Vilseck on Saturday.