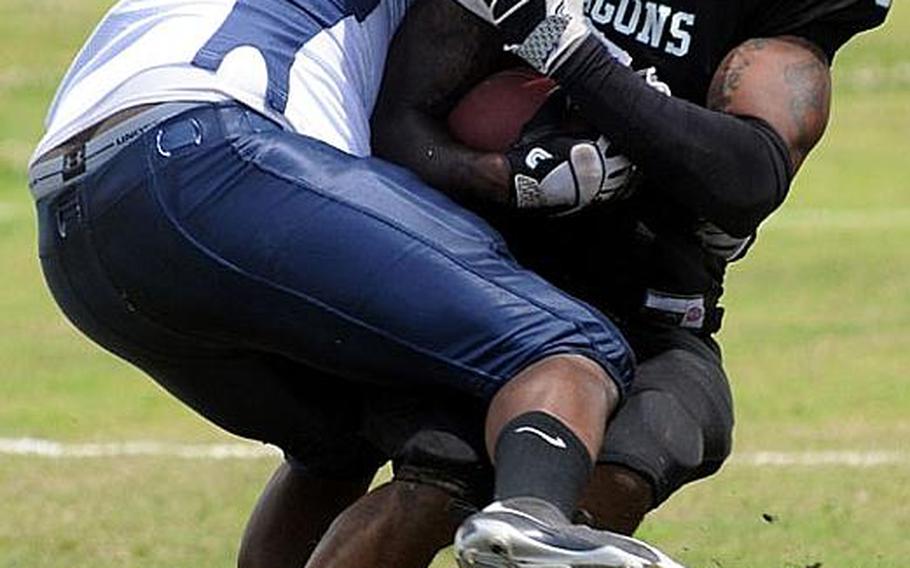 Yokota fell to 3-2 after opening with three straight wins; the Warriors host Misawa on Saturday, with the winner taking the North title. All three South playoff berths are up for grabs, to be decided Saturday and July 3 when Kadena meets Joint Task Force in successive weeks.

Kadena 40, Yokota 28 &#8212; Griffin snapped a 22-22 halftime deadlock with a career-long 81-yard touchdown run early in the third quarter, then increased the gap to 34-22 with an 8-yarder. Tim Lawson ran 39 yards for a score, and Xian Goldbolt caught a 14-yard touchdown pass.

Veal finished with 174 yards on nine catches. Moore had 15 yards on four catches, and Damion Peterson and Rickey Shorter combined to catch four passes for 72 yards.

Early on, a season sweep by the Wolfpack seemed in the cards, thanks to Joseph Huewitt. He caught touchdown passes of 40 and 10 yards to put JTF ahead 13-0 in the third quarter, then halted a Foster drive with a clutch fourth-quarter interception.

Josh Adkins had two Wolfpack sacks. Quarterback Mike Geddie was 4-for-11 for 113 yards and ran 16 times for 31 yards.