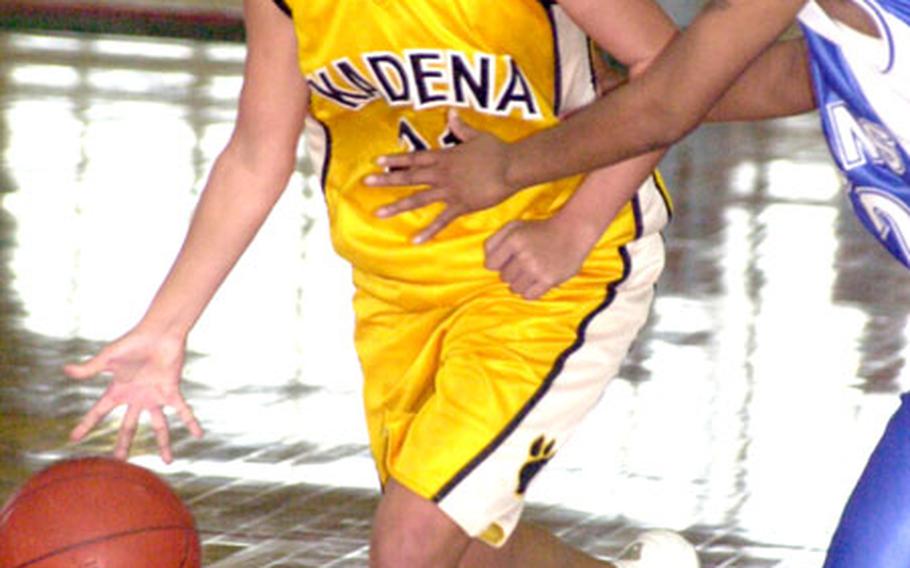 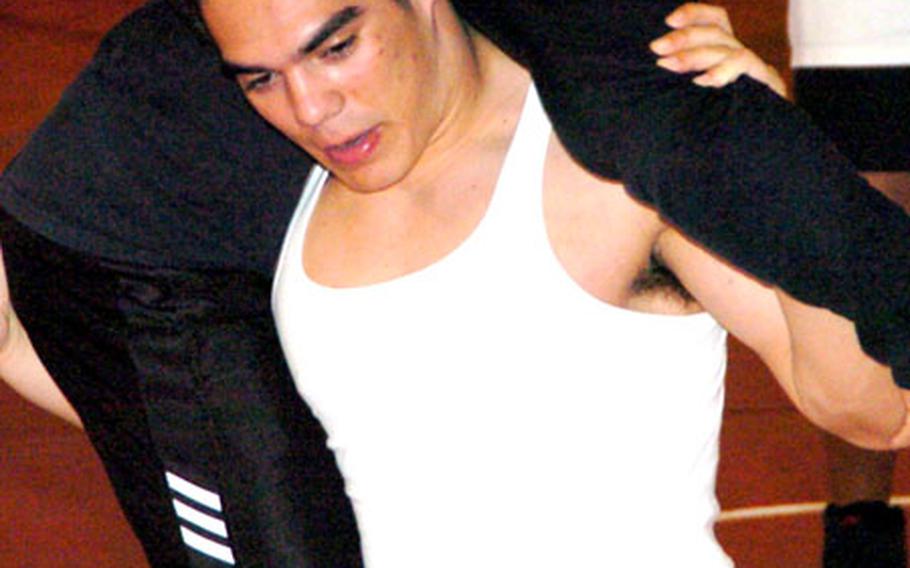 Krievs, a senior, racked up all-Japan League football and All-Far East wrestling and soccer honors while attending two schools during the school year.

Abel, a junior, earned individual and team honors while piling up airline miles to distant locales such as Misawa and Hong Kong.

For their efforts, they share Stars and Stripes&#8217; 2004-05 Pacific high school Athlete of the Year honors.

Krievs began the year at Matthew C. Perry High in southwestern Japan by learning that the school, citing a lack of players, folded the football program.

Rather than remain on the sideline, Krievs transferred to Nile C. Kinnick at Yokosuka Naval Base, moving in with an uncle and donning a Red Devils uniform. He ran 98 times for 613 yards and five touchdowns, helping Kinnick (6-2) finish second in the JFL, its best showing in seven years.

&#8220;As a football player, Adam gave up his friends, gave up his school spirit and dedicated a semester to Kinnick football and wrestling,&#8221; said Red Devils football coach Robert Stovall. &#8220;I think he suffered his senior year (at Perry) so that he would have the opportunity to play and compete. Athletics is truly his soul.&#8221;

Krievs stayed on at Kinnick to try a new sport, wrestling, in which he won three regular-season tournament titles at 180 pounds. At the beginning of the second semester, he transferred back to Perry and got a one-man Samurai wrestling program off the ground in February&#8217;s Far East tournament at Yokota Air Base, where he won a bronze medal.

&#8220;If he stays at Yokosuka, Kinnick wins Far East,&#8221; said coach Robby Rhinehart, whose Red Devils tied Kubasaki 26-26 in the Far East dual-meet final but lost the title via a pinfall tiebreaker.

Then came soccer, in which the Samurai, a Class A team, scored its first victories against Class AA powers, beating 2004-05 Japan Soccer League champion Kinnick and 2001-03 JSL champion Yokota.

&#8220;The straw that stirred the drink,&#8221; coach Mark Lange said of Krievs, who led Perry with 11 goals and four assists and earned All-Far East honors for the second straight year in last month&#8217;s Class A tournament in Korea, where Perry finished fifth.

&#8220;All stats and records aside, Adam is the most well-rounded athlete, student, hard worker, friend to his peers and honest guy you could find,&#8221; Stovall said. &#8220;Kinnick sends appreciation to Adam and his family.&#8221;

Abel already had proven her abilities on the pitch, entering the school year as reigning MVP of the Class AA soccer tournament, with a region-leading 34 goals and 19 assists.

She nearly doubled those totals. Her 66 goals broke the Pacific record of 49, and she added 27 assists. She was one of four returning starters but the Panthers held off Kubasaki for the second straight year for the Class AA crown.

Six months before that, Abel finished third in the individual 3.1-mile race and helped Kadena capture its second straight Far East cross country team title at Misawa Air Base, Japan. The Panthers won both individual races, placed all eight of their runners on the All-Far East team and won the team relay.

&#8220;She is a natural leader&#8221; on and off the playing field, said her soccer coach of three seasons, Hoa Nguyen. &#8220;She communicates on the field and controls the flow of the offense. She is a competitor and a respectful young lady. She is a coachable player (with) a great desire to win and to play hard during practice as well as games. She is an exceptional player who has the ability to play Division I (college) level.&#8221;

Coach of the year: Nguyen gets the nod for taking a rebuilt soccer team to a second straight title and guiding the tennis team to its first Far East championship.

Most improved team: From the ashes of a 7-11 regular season and 15th-place tournament finish, Yokota girls volleyball rose up to match the school&#8217;s best Class AA tournament finish, fifth place, after compiling a 15-7 regular-season record.

Best coach on the field: One common denominator in Yokota&#8217;s rise in volleyball and basketball and its continued excellence in softball (three straight Japan League titles) was senior Darlene Seeley. More than her stats (more than 300 volleyball set assists), her coaches said Seeley&#8217;s greatest contribution was toward team chemistry. Be it a worrisome opponent or a teammate&#8217;s personal problem, &#8220;she was the Super Glue behind the scenes keeping her teams together,&#8221; said Yokota&#8217;s athletics director and Seeley&#8217;s mother, Bonnie. Added her basketball coach, Ric Cabral: &#8220;She does all the things on the team that go unnoticed.&#8221;

Lifetime achievement award: Sharon Kroening of Osan American departs with the most Class A titles in her graduating class: three basketball and two soccer crowns.

Game of the year: Every bout between the most storied programs in Far East wrestling tournament history was a nail-biter, and the wait for tournament officials to determine the outcome of a pinfall tie-breaker was torturous. Never before had a Far East dual-meet championship been so tight: 26-26 between Kinnick and Kubasaki, with the Dragons edging the Red Devils, three pins to two, Feb. 19 at Yokota.

Best strategy award: Kinnick wrestling coach Robby Rhinehart took a calculated gamble in that dual meet, giving up the 148-pound weight class to individual gold-medalist Steve Courtney of Kubasaki and moving Yamato Cibulka and Joey Wood up a weight class, to 168 and 180, hoping his heavier grapplers could overcome an early 16-4 deficit. It almost worked, as Kinnick rallied to lead briefly 26-22 before Kubasaki heavyweight Paul Haecherl pinned Kinnick&#8217;s Phil Ergus to tie it and force tournament officials to scramble through the tiebreaker list.

Lucky loser award: Had Andrew Brown of Kinnick pinned Kris Martinez of Kubasaki at 158 pounds, the Red Devils would have won the dual meet 27-25. As it was, Martinez lost a 5-3 decision but fought for more than a minute to stay off his back and avoided the pin, helping Kubasaki capture its Pacific-record 20th Far East title. Kinnick is second with six.

Play of the year: Junior Lualhati Johnson&#8217;s half-court buzzer-beating three-point shot lifted Kinnick&#8217;s girls basketball team past Yokota 59-57 in the Girls Class AA quarterfinals on Feb. 24. The Red Devils went on to reach the championship, where they lost 60-48 to host Seoul American, which won its first title since 1984.

x-automatically nominated as an MVP or individual champion in a DODDS-Pacific Far East tournament or an Asia-Pacific invitational tournament, or for having been named Stars and Stripes Athlete of the Quarter during the school year.