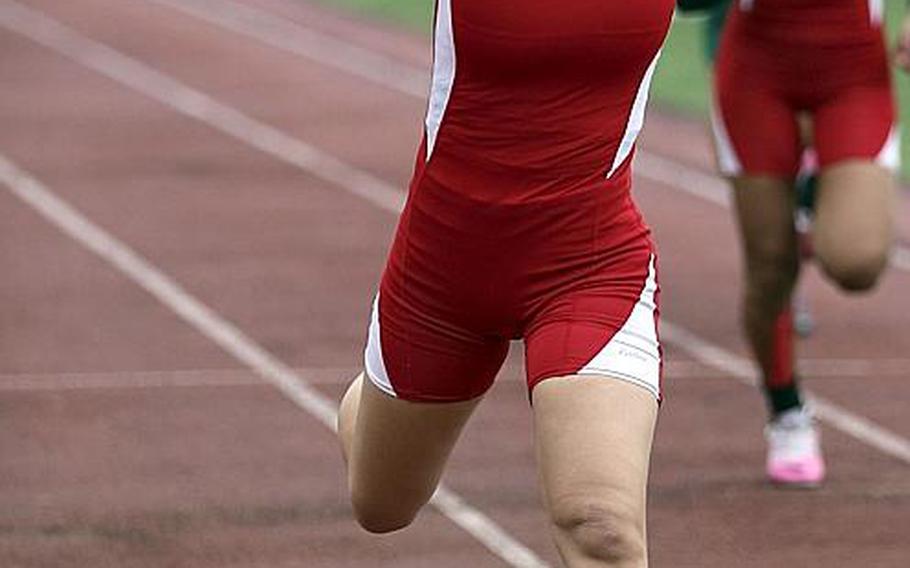 Aya Stewart said she felt like anything but a future northwest Pacific and Far East meet record holder on her first day of Nile C. Kinnick track practice three years ago.

She felt scared out of her mind, a timid freshman coming face-to-face for the first time with a girl who would become her role model, Nile C. Kinnick’s signature sprinter Val James.

“That had been the first sport I joined in high school, so I didn’t really know what to expect,” Stewart recalled, adding that she thought “she wasn’t good enough” to run with James and sprint teammates Shakita Samuels and Rhyssa Hizon, so she kept saying no.

But her teammates persisted. Stewart and those teammates went on to set the northwest Pacific and Far East meet record in the 1,600 relay, while James set meet marks in the 100 and 400.

“She taught me to be strong with myself and never doubt my abilities,” Stewart recalled.

Long after James left for San Diego, where she attends school and is hoping to join the medical profession, Stewart remembered James’ encouragement, and said she’d hoped someday to beat James’ records, any of her records.

That dream came true last month, when Stewart ran the 400 in the Far East meet in 57.98 seconds, beating James’ old mark of 58.63. On top of that, the Red Devils captured the Kanto Plain league season and finals titles and all three Far East Division I team banners.

“It feels absolutely amazing to have finished my last year … beating Val’s record and winning all three banners,” Stewart said. “That was my ultimate goal for myself and my team for the longest time and having to share that wonderful experience with everyone.”

For those accomplishments, Stewart has been named Stars and Stripes Pacific girls track and field Athlete of the Year. She beat out a bunched field featuring sprinters Kaelyn Francis of Kubasaki, Tasia Nelson of Zama and Regine Tugade of John F. Kennedy of Guam, and distance specialist Lisa Watanuki of American School In Japan.

“Being as fast or faster than Val has been Aya’s goal for four years,” coach Luke Voth said. James showed her three sprint teammates the ropes, and “ever since then, Aya has basically followed in the footsteps of Val to the best of her abilities.”

The 400 is a demanding race, mentally and physically, James said. “I always knew she had it in her to be as fast as me; I saw myself in her,” James said via Facebook. “She is such an amazing and very talented girl.”

Stewart said she tried to carry James’ example to her younger teammates during the season.

“I try to encourage everyone on my team, because that helped me get close to the new kids that join track every year,” she said. “I didn’t want any of them downplaying themselves, thinking they aren’t good enough.”