Steelers and Seahawks fans party it up on Super, uh, Monday 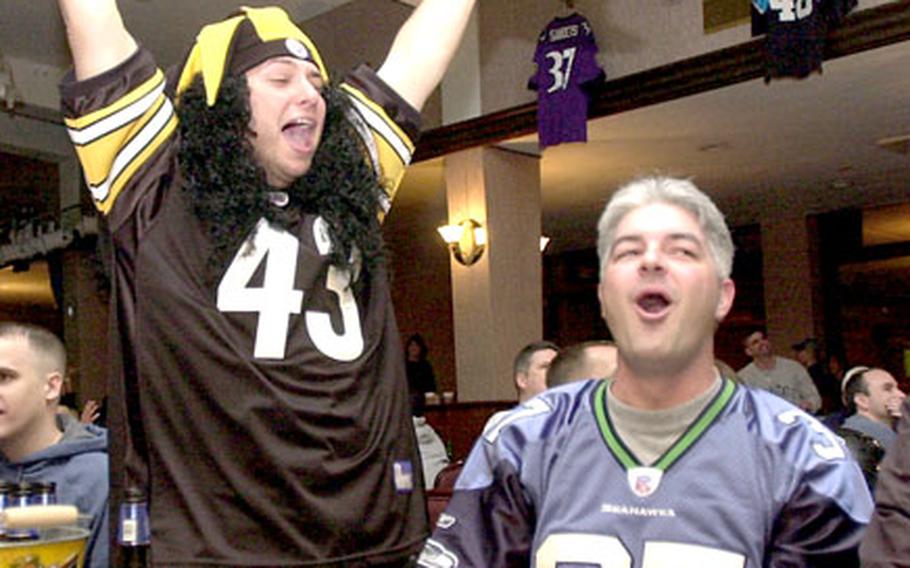 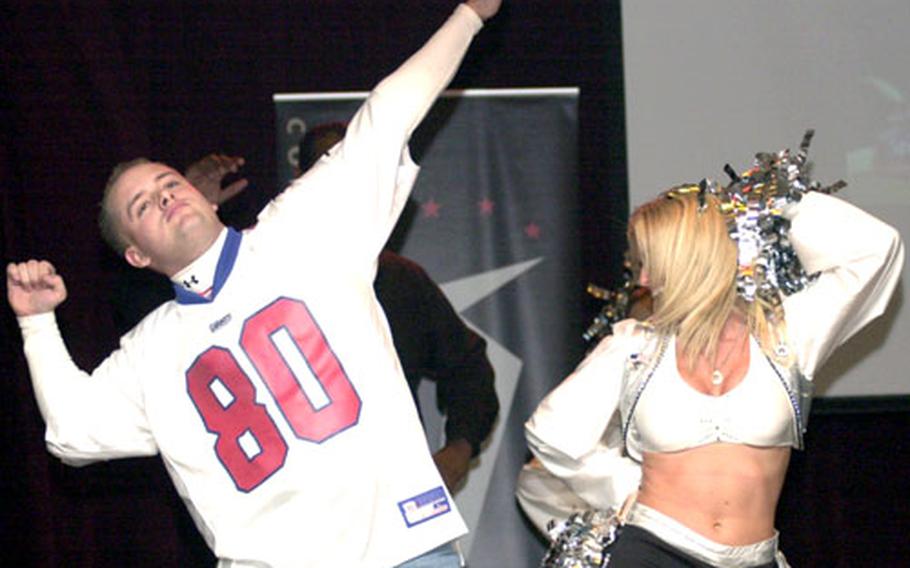 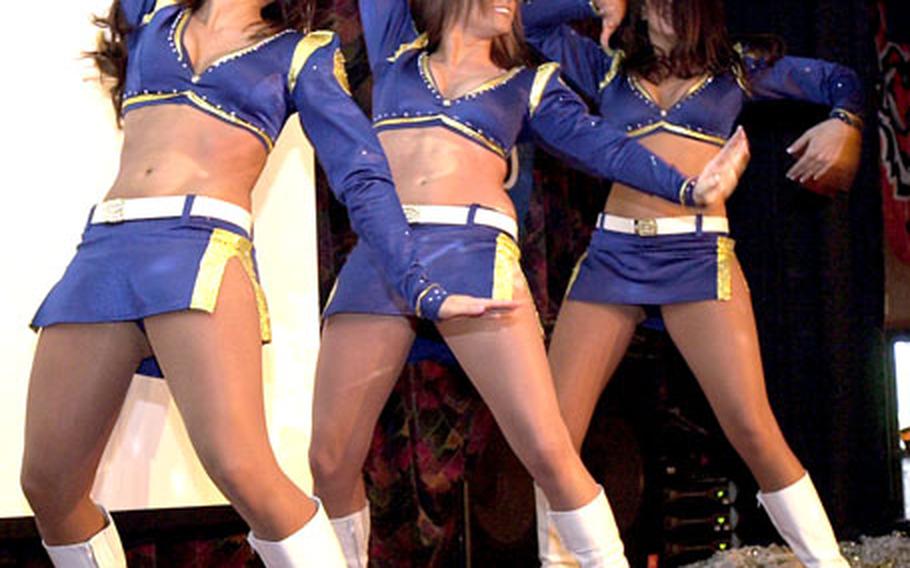 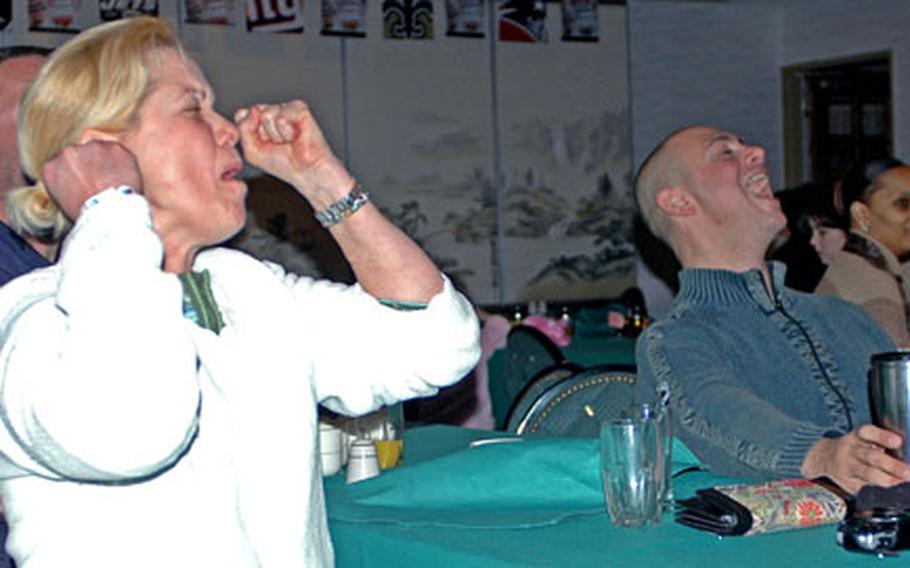 Pittsburgh Steelers fans jumped up, hands in the air, and roared.

Wide receiver Antwaan Randle El had just thrown a 43-yard touchdown pass to Hines Ward with 9:04 to play, sealing a 21-10 victory over the Seattle Seahawks in the Super Bowl.

He was joined by fans from Singapore to Seoul who turned out Monday morning at base clubs and community centers throughout the region, along with handfuls of Oakland Raiders and St. Louis Rams cheerleaders, to take part in what arguably is the world&#8217;s biggest one-day sporting event.

Despite the time difference &#8212; kickoff was at 8:25 a.m. Monday Japan and Korea time &#8212; bases and commands gave leeway for most service members and civilians to enjoy the day.

The presence of the Oakland Raiderettes, who fanned out to major Japan bases, and St. Louis Rams cheerleaders, who appeared on bases in South Korea and Okinawa, was &#8220;icing on the cake,&#8221; said Bob McKeta of Zama&#8217;s Morale, Welfare and Recreation marketing office.

&#8220;There&#8217;s always interest in the Super Bowl, but if you get a name attraction, that adds so much to it,&#8221; McKeta said. The cheerleader visits were sponsored by base MWR and services divisions and Armed Forces Entertainment.

Two of the Oakland cheerleaders, Lori O&#8217;Dell and Tiffany Buenaventura, grew up as Army dependents.

As kickoff approached, fans of both teams at Rocker NCO Club on Okinawa&#8217;s Kadena Air Base spent time posturing and taunting. The crowd of 250 or so displayed a large number of Steelers jerseys.

Staff Sgt. Erik Marsaln of Kadena&#8217;s 718th Civil Engineering Squadron went a step further, decked out in pants covered with the Steelers&#8217; logo, a jersey with the No. 43 of All-Pro safety Troy Polamalu, a jester-style Pittsburgh hat and even a Polamalu-style wig sporting long curls.

As the game wore on, fans exchanged good-natured trash talk.

Bill Hafemeister, a Department of Defense Dependents Schools employee of Kadena Middle School wearing No. 37, boldly predicted that Alexander was &#8220;definitely going to get 100 yards, and I&#8217;ll give him two touchdowns.&#8221;

Much the same give and take occured at Sasebo Naval Base&#8217;s Harbor View Club in Japan, where fans were equally enthusiastic about their teams.

Lt. Cmdr. Lisa Braun, a Seahawks fan, and Petty Officer Don Acker, a Steelers supporter, joyously raised their arms in cheers throughout. When Acker crowed, Braun frowned; when Braun thrust a celebratory fist in the air, Acker scratched his head.

Contests included a &#8220;King of the Quarter&#8221; drawing at Zama, in which two winners sat flanked by Raiderettes during the second and fourth quarters. The Raiderettes also got five GIs on stage to &#8220;learn how to be a Raiderette&#8221; and engage in a dance-off for more prizes.

After a tight first half, the Steelers broke out solidly when Willie Parker rambled 75 yards for a touchdown, the longest run in Super Bowl history.

&#8220;I told you Parker was going to break a big run,&#8221; said Marsaln, who at halftime predicted Parker, Ward and Polamalu each would make big plays.

The Seahawks clawed back on Matt Hasselbeck&#8217;s scoring pass to Jerramy Stevens.

Steelers fan Sgt. Tracy Syndab admitted to feeling &#8220;kind of sick&#8221; when watching that play at the Main Post Club on Yongsan Garrison in Seoul. Though hailing from South Carolina, most of his family consists of Steelers fans &#8212; except his son, an avowed Dallas Cowboys fan.

It turned out there was no need, thanks to the Randle El-to-Ward gadget play.

Finally, as the game and Seahawks&#8217; misery ended, Sanders tipped his hat to his opponents.

Seattle native Leslie Lovata, a Yongsan Garrison civilian, recognized her team for coming as far as it has this year, the fresh loss notwithstanding.