Spring was the time for Kadena athletics to blossom 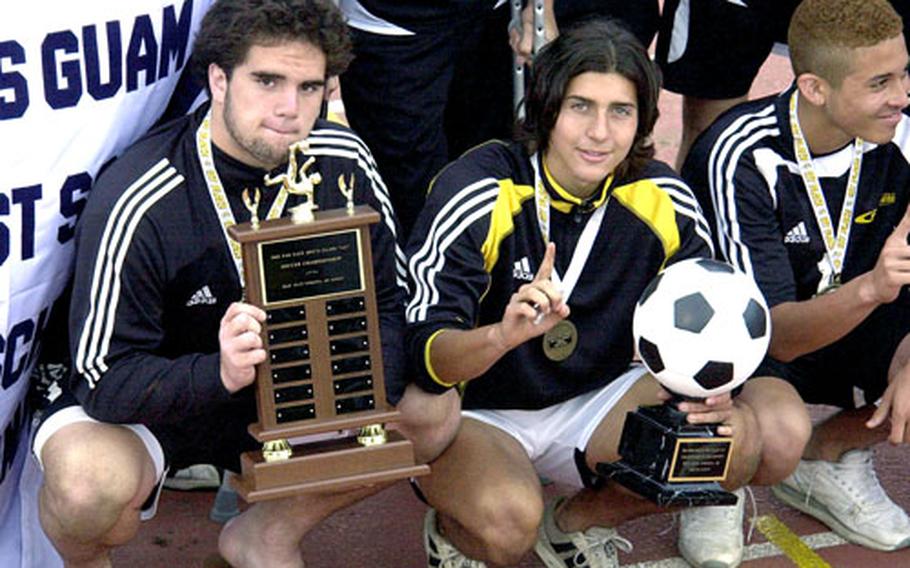 KADENA AIR BASE, Okinawa &#8212; Call it a red-letter spring for Kadena black and gold.

A third straight Far East Class AA soccer title for the girls, a third in four years for the boys. Baseball, softball and boys track and field league championships.

They also put a sweet exclamation point on a school year fraught with disappointments:

The Panthers came up short in the football series with Kubasaki then settled for runner-up finishes in Far East tennis and cross-country to Seoul American. Their volleyball season? Pedestrian.Kadena&#8217;s boys basketball team finished third in the Class AA tournament; the girls lost in the championship.Only the wrestlers, with their Far East individual and dual-meet team titles, staunched the flow of disappointments&#8230; until spring sprung.

The boys went 17-1-1. Zendejas&#8217; 20 goals led the offense; Awana and the defense permitted just three goals in the team&#8217;s final 14 matches. Then the team had to overcome injuries to two key starters to blank Kubasaki and cap its run through a tough tournament.

The Panthers girls, however, &#8220;were never even remotely threatened&#8221; in their bid for a Class AA title, a tourney organizer said.

Boys track and field also had a winning season, sweeping all but one regular-season meet, capturing the district championship and grabbing eight gold medals in the Kanto Plain

The baseball players said they enjoyed the competition: After three years of dominating Kubasaki, they found themselves in close quarters. But at the last game Saturday, Chris Kaneshiro hit a walk-off two-run homer, his first of the season, ending Kadena&#8217;s 6-5 victory.

The softball team entered its season finale minus its primary weapon: flame-throwing sophomore Kara Davis. But Brooke Hudson struck out five, the defense backed her ably, and the Panthers scored a season-high number of runs in a 10-7 victory over the Dragons.