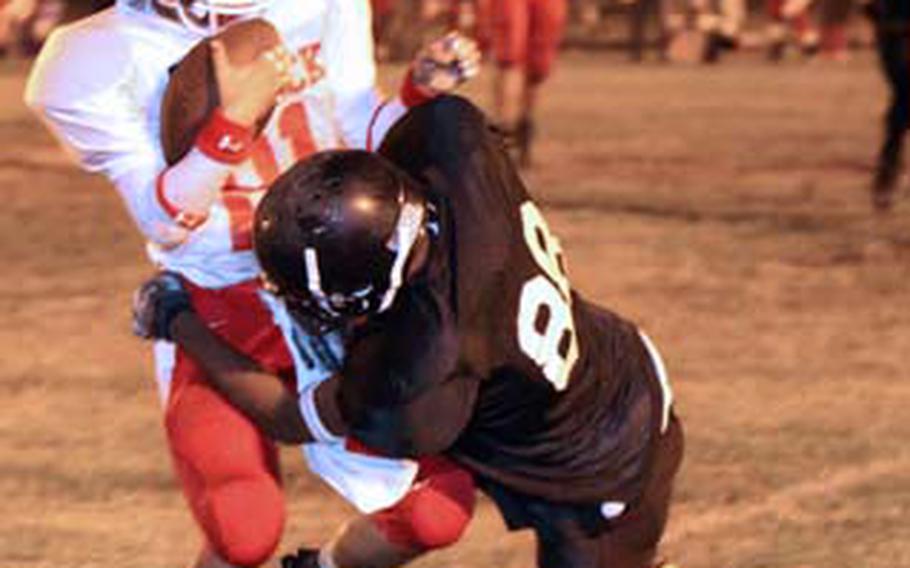 Zama American came back for its second victory in three games. Nile C. Kinnick came away from Friday&#8217;s game showing its first signs of life this season.

Ryan Blackstock scored four times, including the game-winning TD early in the third quarter, as the Trojans rallied from a 19-6 first-quarter deficit to defeat the winless Red Devils 41-27 at Naval Air Facility Atsugi&#8217;s Reid Memorial Stadium.

Despite the loss, this was far from the Kinnick team that had been outscored 151-12 in its first three games.

Zama 41, Kinnick 27: At Naval Air Facility Atsugi, Japan, the Trojans showed their rushing game clearly doesn&#8217;t need polish. Zama has run for 1,171 yards, by far the most in school history after three games.

At the outset, it appeared as if Kinnick might finally taste victory. Elijah Gamble returned the opening kick 85 yards for a touchdown and added a 3-yard TD run. He rushed 14 times for 78 yards.

Meyer went 16-for-25 for 130 yards. Allen had five catches for 51 yards and Taylor Myers three receptions for 50 yards.

ASIJ 23, Edgren 13: At Tokyo, Jardine, a sophomore, went 7-for-11 for 157 yards, including TD passes of 58 yards to Hamish Denham and 15 yards to senior brother Thomas Jardine. Denham also kicked a 31-yard fourth-quarter field goal to cap the scoring.

The Eagles outgained the Mustangs 288-238 and held ASIJ to just 81 rushing yards. But Edgren came away empty on three second-half trips deep into ASIJ territory and Matt Linder dropped a sure TD pass from James Ervin.

Ja&#8217;Maal Dennis ran 2 yards for an Eagles touchdown and John Benavides went 1 yard for the other. Dennis ran 25 times for 102 yards. Linder recovered a fumble and intercepted a pass and had 69 yards on three catches. Ervin went 7-for-15 for 98 yards.