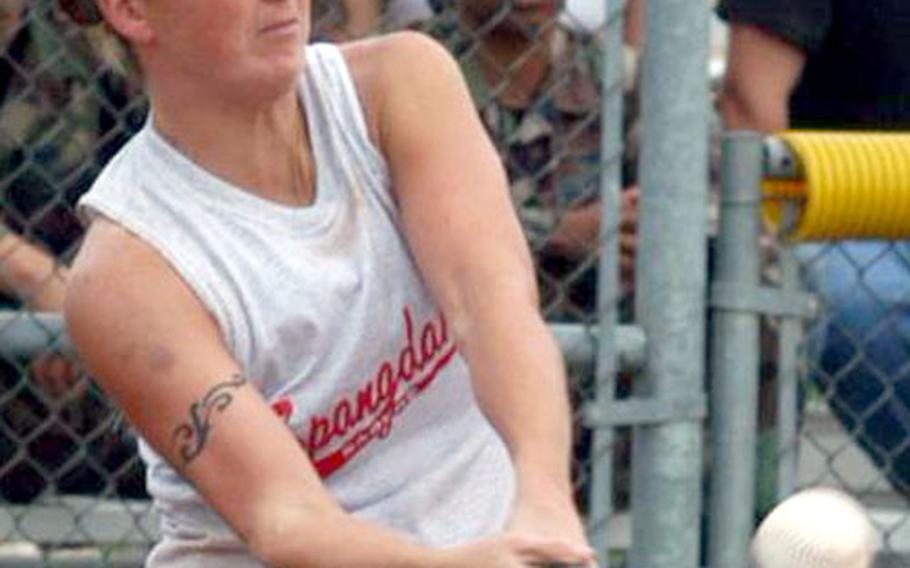 Spangdahlem shortstop Kim Bach connects with a pitch Tuesday in the first game of the championship round of the USAFE softball tournament. Spangdahlem forced a final game, but lost to Aviano 8-1. (Kent Harris / S&S)

Spangdahlem shortstop Kim Bach connects with a pitch Tuesday in the first game of the championship round of the USAFE softball tournament. Spangdahlem forced a final game, but lost to Aviano 8-1. (Kent Harris / S&S) 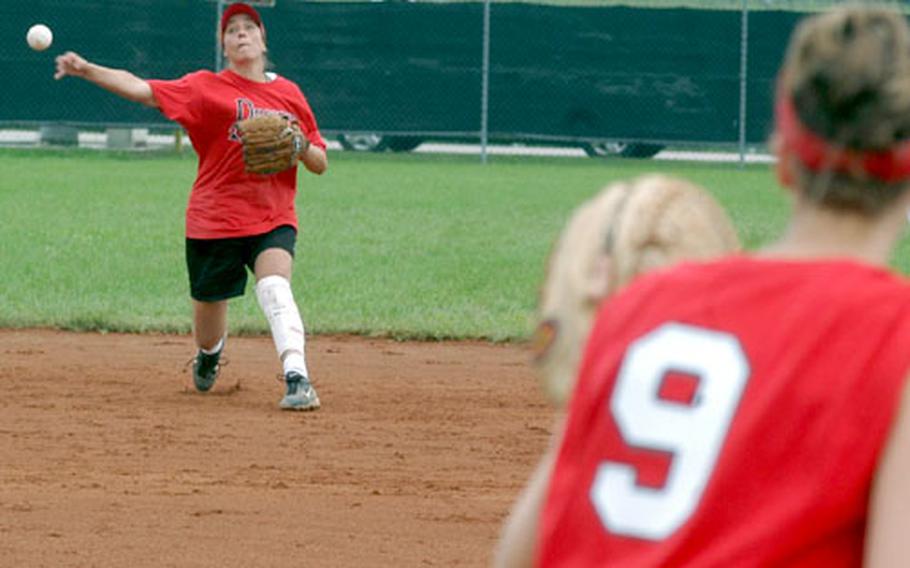 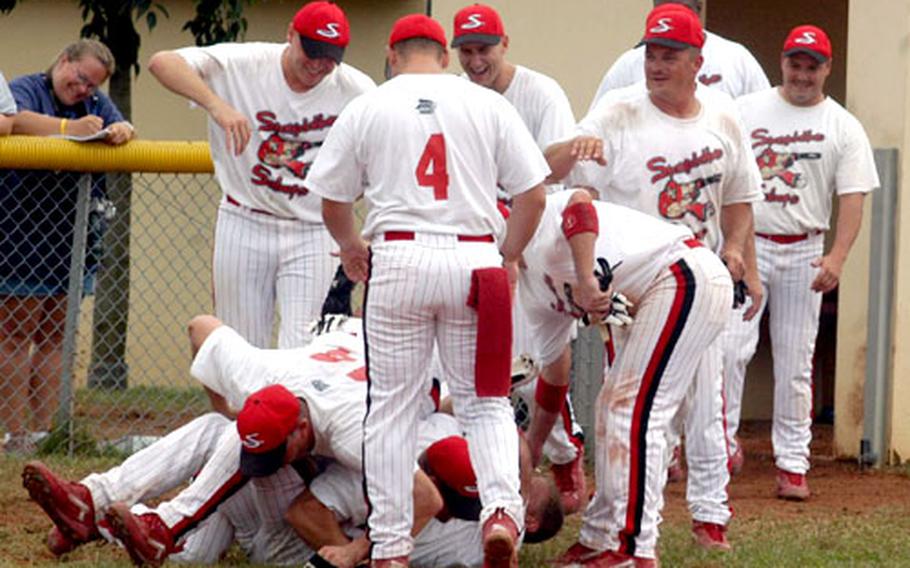 The Spangdahlem men&#39;s softball team celebrates its second straight U.S. Air Forces in Europe title Tuesday by forming a mini-pile after rallying for three runs in the bottom of the seventh to defeat Ramstein, 12-10. (Kent Harris / S&S)

AVIANO AIR BASE, Italy &#8212; They called it a softball tournament, but it was more like some crazy endurance event.

Forced by rain to play well past midnight Monday, Air Force community softball teams were back at it Tuesday morning. They played and played ... and played some more.

Spangdahlem&#8217;s men&#8217;s team won its second straight title, though, rallying for three runs in the bottom of the seventh to top Ramstein 12-10. All four teams will take on the top four Army teams starting Thursday in Aviano for bragging rights in Europe.

Rain wreaked havoc on the schedule Sunday and Monday, forcing many games to be played after dark on Monday and Tuesday.

Aviano, which had to play a second game because of a 7-2 loss to Spangdahlem in the first game of the championship round, looked like a different team in the final game.

A baserunning gamble in the fourth inning broke a scoreless tie. Then the Dragons benefited from a Spangdahlem gamble that didn&#8217;t pay off in the top of the fifth.

Aviano&#8217;s Michelle Segura sprinted from second base after a fly ball to center and looked like she might be out at third. But the ball got past Spangdahlem&#8217;s Jasmine Ratcliffe and Segura scored. Kim Judy then advanced on another fly out and Nicole Haslem drove her in to make it 2-0.

Spangdahlem&#8217;s Kelly Keefer appeared as if she had tied the game by doubling with two runners on in the fifth. But she was out in a collision at third trying for a triple, and the runner ahead of her hadn&#8217;t yet crossed the plate.

Aviano turned that momentum into four more runs in the bottom of the inning, helped by Kristi Lanham&#8217;s two-run single and two Spangdahlem errors.

The Dragons had defensive problems of their own in the first game, helping Spangdahlem to a four-run first inning. Keefer had a run-scoring single and Aviano made four errors. Aviano never got closer than two runs the rest of the way.

Kenna Jett had five hits in the final two games for Spangdahlem.

In the men&#8217;s final, Randy Wilhide crushed a two-run homer with one out in the bottom of the final inning to win it for Spangdahlem, which rallied from a 10-1 deficit.

Down 10-6 entering the sixth, the champs clubbed three home runs to pull within one entering the final inning. Pat Boot&#8217;s RBI single tied it in the seventh before Wilhide stepped to the plate. Everyone knew the game was over the second the ball left his bat.

Player/coach Dale Wright said the game didn&#8217;t go according to plan, though.