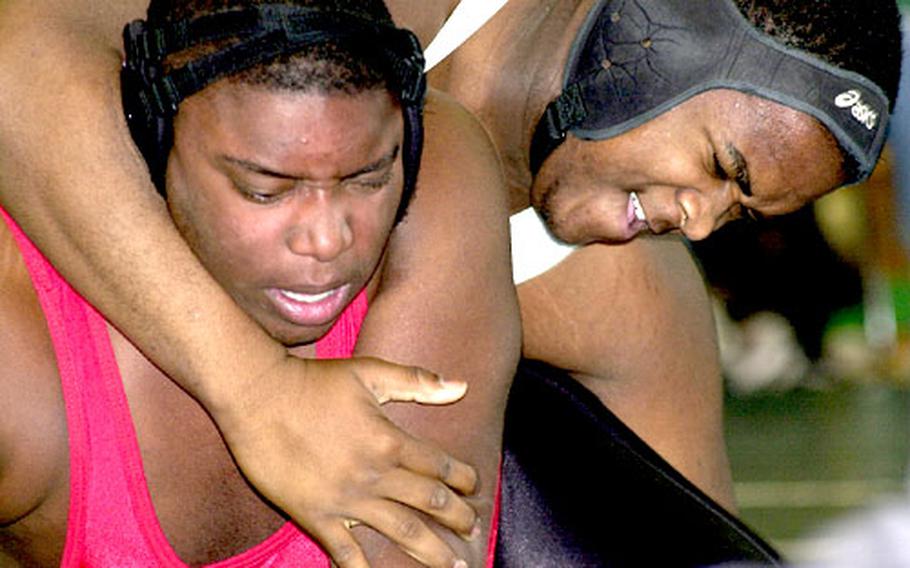 Saturday&#8217;s result out of Misawa Air Base was somewhat surprising, given the recent history of Zama American High School wrestling.

Though outscored 106-58 by Nile C. Kinnick, the Trojans took second in last weekend&#8217;s Department of Defense Dependents Schools-Japan tournament at Robert D. Edgren High &#8212; their best finish in a regular-season tournament in 14 years.

Was it a sign of a renaissance for a Zama program that brought only 10 wrestlers to Misawa, where others carried twice as many or more?

Long the doormat of the Japan League and Kanto Plain Association of Secondary Schools, the Trojans haven&#8217;t produced a gold-medal winner in the Far East tournament since the 1980s. Their last team crown came in 1982.

But there&#8217;s reason for optimism. Sophomore David Burnett, a 245-pounder in the new heavyweight division added to competitive leagues in Japan, South Korea and Okinawa this season, is unbeaten through three dual meets and three tournaments.

&#8220;I think David has an excellent shot&#8221; at a Far East gold medal, said Harlow, 29, in his second season with the Trojans after spending several years at Oklahoma schools.

At least in Japan, Burnett has emerged as the top dog in the new heavyweight division, which many see as a fresh avenue for wrestlers who might have been too heavy for the sport in the past.

Although the measure remains &#8220;under consideration&#8221; for next month&#8217;s Far East tournament at Yokota Air Base, it has gained &#8220;almost unanimous&#8221; support from Far East coaches, Hobbs said, along with the endorsement of Derr, a former Zama American coach.

&#8220;I liked the old system better,&#8221; she said, saying the new weight favors large schools and hurts smaller schools such as Osan American in South Korea and E.J. King in Japan, who typically don&#8217;t field full teams and must surrender a weight class to larger programs in dual meets and tournaments.

&#8220;Most high school boys who are over 250 pounds aren&#8217;t in great shape. And having it hurts the smaller schools who have trouble filling the other weight classes. I&#8217;m not upset that it happened. I just think the old system was better.&#8221;

More vocal in his opposition was Chumley&#8217;s predecessor, Jeff Pellaton, who coached Kubasaki to 13 Far East championships before leaving the school for a new job.

Derr remembered that season as well.

Burnett views the new weight class as a &#8220;big plus for me&#8221; and plans to remain relentless in his bid for a Far East title.

In Burnett, Harlow sees hope not just for a long-awaited gold medal but rejuvenation for his entire team.