Alicia Moore of the Okinawa TPS Diamonds rips a single in the bottom of the seventh inning of the second game during Monday&#39;s women&#39;s championship. (Dave Ornauer / S&S) 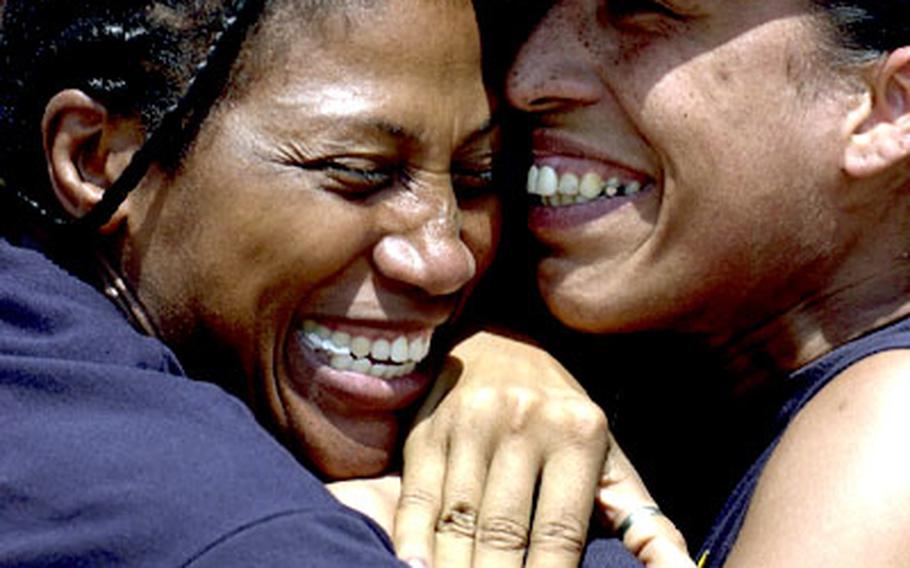 YONGSAN GARRISON, South Korea &#8212; After launching the ball into the sunny, afternoon sky, Dexter High paused for a moment to admire his handiwork.

The All-Air Force slugger went 33-for-44 in the tournament, leading Yellow Box to its first interservice Grand Slam title.

The 31-year-old staff sergeant from Concord, N.C., assigned to the 18th Maintenance Operations Squadron at Kadena Air Base, hopes his performance sent a strong message to Air Force sports:

The problem is, Air Force put its varsity sports program on hold for three months in mid-April, reviewable after 45 days. That 45-day period has passed, but High says he hasn&#8217;t heard if Air Force plans to defend its title, or even hold its tryout camp in July at Eglin Air Force Base, Fla.

The TPS Diamonds came out of the loser&#8217;s bracket and swept Red Fox, a Korean semi-pro team, to avenge a loss in last year&#8217;s Pacificwide final.

TPS gave Okinawa its first sweep of the tournament titles since 1996 by winning a pair of one-run games, 9-8 in nine innings and 17-16.

Alicia Moore&#8217;s sacrifice fly plated pinch-runner Shirley Belvin to break an 8-8 in the ninth inning of the opener. Jamie Bailey ended the second game with a one-out single to center that scored pinch-runner Stephanie Knight.

Gina Tash went a combined 4-for-5 with two sacrifice flies, a triple and eight RBIs. Kelly Winston was 6-for-7 with an inside-the-park homer and five RBIs and Vicki Pryor, silent in the first game, was 3-for-4 with a double, a triple and four RBIs in the nightcap.