Soccer in Korea more competitive than ever 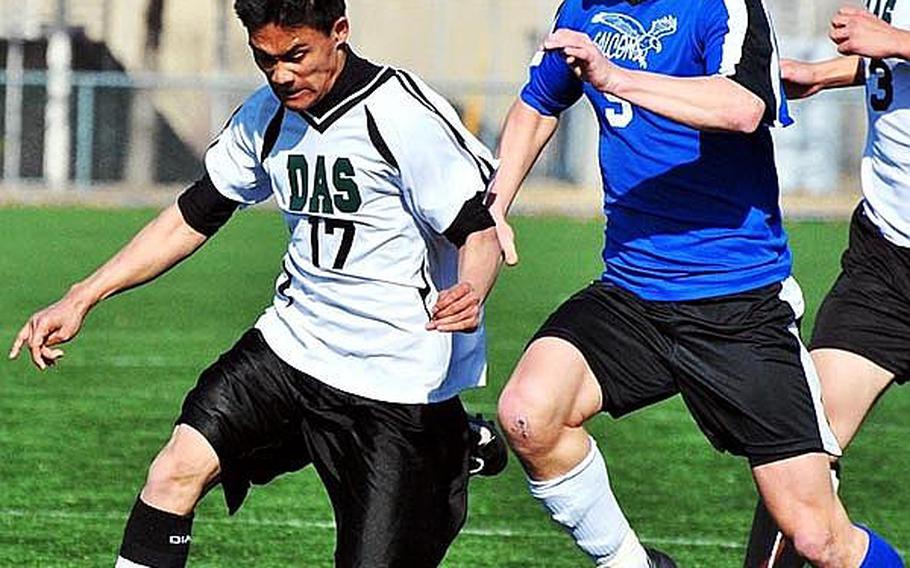 Buy Photo
Peter O'Grady, right, battling Daegu American's Ryan Banzon for the ball, is a veteran on a Seoul American Falcons boys soccer team that began this season 0-3 but has gone 5-2-3 since, including a four-match win streak, and has made them one of six teams atop Korean-American Interscholastic Activities Conference Division I with a good chance to win the league's championship tournament this weekend at Osan American High School. (Erika Brun/Special to Stars and Stripes)

Korea boys high school soccer has never seen the likes of this.

Normally, it&rsquo;s as much a rite of passage in April as tax deadlines, Final Fours and the start of baseball: Seoul Foreign&rsquo;s boys soccer team captures another Korea league regular-season title.

It happened again this year, but it came down to a 2-1 Crusaders&rsquo; victory Wednesday on the final day of the regular season.

The league&rsquo;s six top teams finished 13 points apart and the top five were separated by eight points after Wednesday&rsquo;s action.

It portends an upredictable Korean-American Interscholastic Activities Conference Division I tournament this weekend as the league has ever seen in its 39 years, says longtime league historian Jack Moon.

&ldquo;There are no gimmes here,&rdquo; said Moon, who coached for 12 years in KAIAC and has been with the league since 1979. &ldquo;In the past, we&rsquo;ve had two, maybe three close enough to catch each other, but never to this extreme.&rdquo;

Moon and league coaches say that unlike the Crusaders&rsquo; power years, any of the league&rsquo;s top six are equally powerful and equally vulnerable.

&ldquo;It&rsquo;s exciting,&rdquo; said coach Steve Boyd of sixth-place Seoul American. &ldquo;Any of those six teams can beat each other on any given day.&rdquo;

Sixth-place Seoul American (5-5-4) trailed GSIS by six points, but went 5-2-4, including four straight wins, after an 0-3 start. The Falcons have beaten or tied every team they&rsquo;ve played.

What has made this season so competitive?

Unlike those Seoul Foreign domination years, when the likes of Pacific single-season (61) and career (183) goal-scoring leader Remco Rademaker patrolled the pitch, &ldquo;we don&rsquo;t have any super-superstars, no Remcos running around, just good players playing as a team,&rdquo; Moon said.

&ldquo;It&rsquo;s one of those rare years when the teams are really competitive,&rdquo; said Boyd, who has coached the Falcons on and off for 10 years.

Not so GSIS (freshman Jacob Son, 19 goals) and SIS (Eddie Cho, 14), which surprised many with their sudden rise to prominence.

&ldquo;Nobody saw GSIS coming,&rdquo; Boyd said, while SIS &ndash; which hasn&rsquo;t fielded a competitive entity in any team sport since its Far East champion basketball teams of the early 1990s &ndash; has several players in the 6-foot-1, 200-pound range on the pitch.

&ldquo;Where were those guys during basketball?&rdquo; Boyd said, adding that the pride that South Korea has taken in its national soccer program, which reached the World Cup semifinals in 2002, may be spilling over into its soccer-playing populace. &ldquo;When it comes to playing, they&rsquo;re saying, &lsquo;This is our game and we&rsquo;re going to be good at it.&rsquo;&rdquo;

Seoul American began the season riddled with injuries, but once fully healthy, Josh Chung, Peter O&rsquo;Grady, Peter Kim, Josh Naputi and the Falcons began to feel their oats &ndash; and could be a darkhorse bet this weekend at Osan.

&ldquo;Word has gotten around the league that we&rsquo;re better than we were and as healthy as we&rsquo;ve been all season,&rdquo; Boyd said.

&ldquo;And we were missing four starters,&rdquo; Boyd said of the victory over GSIS on April 8. &ldquo;Because it&rsquo;s so wide open between the top six, we don&rsquo;t fear a YIS-S or an SFS. It can be any one of these teams.&rdquo;

So, what will it take to be the one this weekend?

&ldquo;It&rsquo;s been all over the place,&rdquo; said first-year YIS-S coach Brian Bennett. &ldquo;Every game has been so unpredictable. You have to tell them (players) to do their best to win because every other team is out there trying just as hard. It&rsquo;s who has the healthiest, strongest 11, especially the top three.&rdquo;

Rather than being disappointed over two rare regular-season losses, Hamm says he appreciates the competition. &ldquo;It makes it more meaningful for the players,&rdquo; he said. &ldquo;It raises the level of play for everyone.&rdquo;

&ldquo;I&rsquo;ve never seen it this competitive,&rdquo; Boyd said. &ldquo;It&rsquo;s a matter of who&rsquo;s playing better that day. And the best may be yet to come.&rdquo;