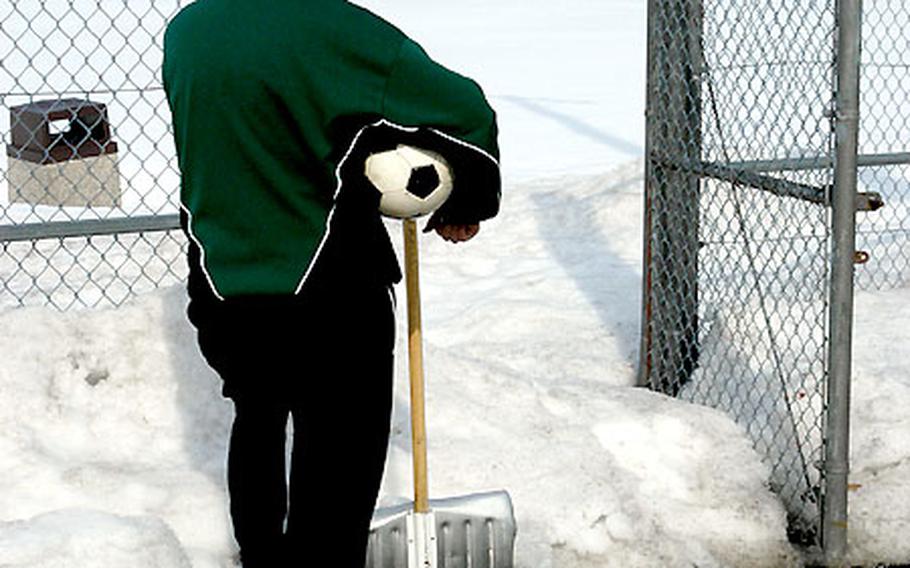 John Parker shook his head. Shovel in hand, a soccer ball tucked under his arm, the Robert D. Edgren High School boys coach turned from the field and headed back toward the gym, where his team was about to start practice.

Misawa has been hit by steady snowfall lately, confining the boys and girls teams &#8212; who began the Japan Soccer League season last weekend &#8212; to indoor workouts. The boys practice at the high school&#8217;s old gymnasium, while the girls use the Sollars Elementary gym.

There, the clubs have conditioned, run two- and three-man weaves, dribbled balls through cones, held small-sided games and skill-building drills &#8212; everything but the outdoor workouts they sought, thanks to the ever-present white blanket.

&#8220;It even snowed on the way out, a snowfall to bid us goodbye,&#8221; Parker said, referring to the bad weather that greeted them last week on a bus trip to Ikego Heights Naval Housing Facility, where the Eagles lost 9-0 to Nile C. Kinnick on Friday.

Their woes continued last Saturday with a 7-0 defeat at Zama American.

Despite the losses, the team found at least one positive.

&#8220;It&#8217;s nice to see ground with no snow on it,&#8221; said Gerald Layden, one of just four returning players on an Edgren boys team that lost six seniors to graduation.

While the Edgren boys spent much of Monday&#8217;s practice licking their wounds, a different mood permeated the Lady Eagles&#8217; practice at Sollars &#8212; one of celebration, over a most unlikely pair of victories at Iwakuni Marine Corps Air Station over Matthew C. Perry.

Granted, the Lady Eagles beat a Class A team in Perry, while the Edgren boys suffered their defeats against Class AA opposition.

But like the boys, the Edgren girls had no outdoor workouts and approached their JSL season openers &#8220;nervous and concerned,&#8221; Oberg said.

&#8220;Hands down, we could smoke anybody indoors,&#8221; said the Sollars physical education teacher.

Snow is a fact of life for half the year at Misawa. The latest shot was a blizzard the weekend of March 8 that shut down the base.

On Honshu&#8217;s northeast coast, several miles off the Pacific Ocean shore, the air base receives an average of 120-140 inches of snow per year, according to Misawa Naval Air Facility&#8217;s Web site.

In the spring, summer and fall, the area is often shrouded in sea fog. Rainfall averages 33 inches a year. Spring and summer daytime highs range in the 70s to 90s but few facilities on base are air-conditioned.

Only one other home weekend dots the schedule, May 9-10.

Parker, meanwhile, must overcome a slew of obstacles this spring: the bad weather, his team&#8217;s youth and its inexperience.