Smith put face to fast times and hurt on foes 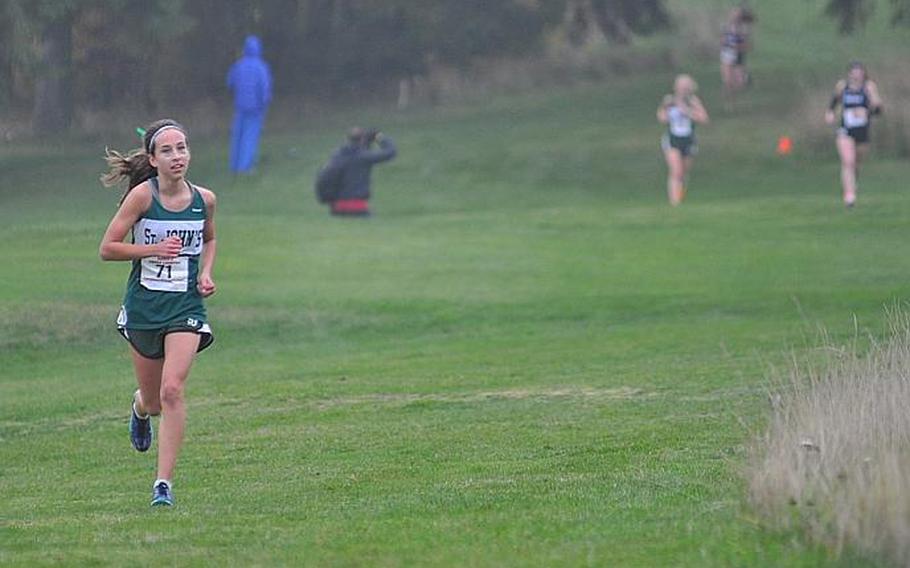 Kayla Smith was something of a mystery to most of the competitors she faced in the DODDS-Europe girls cross country championships this fall, known to most only by the stunning times she turned in each week.

By the end of the sport’s final day, however, they all knew who she was.

Smith, the ace runner from St. John’s International School in Waterloo, Belgium, traversed the challenging Baumholder Army Golf Course venue on Oct. 31 in 19 minutes, 28.61 seconds to seize the 2015 DODDS-Europe championship. As such, she is the Stars and Stripes girls cross country Athlete of the Year.

The DODDS-Europe schedule run by St. John’s mostly included Benelux neighbors such as Brussels and United Kingdom programs like Lakenheath. That kept Smith sequestered from many of her fellow elite runners hailing from Ramstein, Stuttgart and Wiesbaden.

“I raced against a few of them but there’s a lot I haven’t seen before,” Smith said.

The championship race also represented the first time Smith had navigated the notorious hills of the championship course at Baumholder. None of that uncertainty affected her performance, however, as she finished 43 seconds ahead of the race’s runner-up.

“I knew I had a good chance,” Smith said.

In the meantime, those DODDS-Europe runners who tracked their competition throughout the year became aware of the vaguely mythical figure posting outrageous times up north. She turned in a winning time of 18 minutes, 31 seconds in the season-opening seven-team race her school hosted Sept. 26; she finished one second off that pace two weeks later in a meet at SHAPE. Those two times held up as the best reported by any DODDS-Europe competitor this fall by a substantial margin.

Still, Smith needed to validate her growing reputation on a head-to-head basis. The European championship meet at season’s end finally placed Smith on a starting line with all of the best DODDS-Europe runners. Smith used the opportunity to emphatically prove herself.

“I knew she was really fast,” said Ramstein’s Katelyn Schultz, who finished third in the European championship race behind Smith and her St. John’s teammate Sofia Jegnell. “She’s insanely fast.”