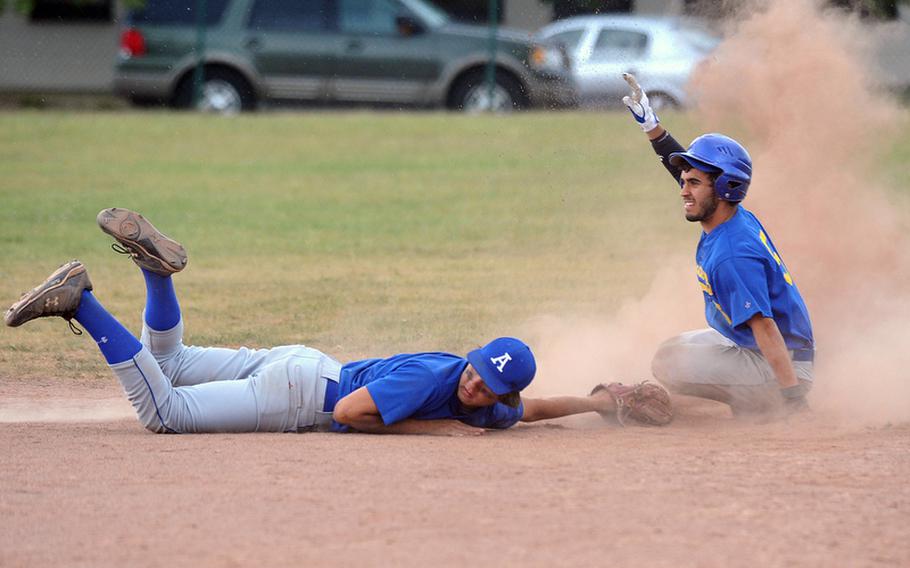 Rota's Cody Holland, left, and Sigonella's Marco Summerfield wait for the umpire's call at second. Summerfield was safe, but Rota won the Division III game 8-6 on opening day of 2011's DODDS-Europe baseball championship. The Admirals went on to take the Division III title with a 7-6 win over the Jaguars. (Michael Abrams/Stars and Stripes)

It might be the national pastime, but for Europe&rsquo;s smallest high schools, baseball&rsquo;s an annual challenge.

So much so, in fact, that just two of them are on board for this month&rsquo;s European tournament at Kaiserslautern and Ramstein. Assembling enough players, finding enough games, scrounging up the facilities, coping with the remoteness of many small schools from their counterparts and battling Europe&rsquo;s generally rainy spring weather make manning the diamond a bit too rough for most of the continent&rsquo;s Division III schools.

Leading off against the small schools is the numbers problem. Each spring, DODDS-Europe offers baseball and softball, boys&rsquo; and girls&rsquo; soccer and track and field to its student athletes.

The praiseworthy number of choices, however, puts real pressure on the limited populations at many D-II schools, let alone D-III schools. It&rsquo;s no surprise, therefore, that the two schools still planning to play in this year&rsquo;s baseball tournament &ndash; Alconbury and defending D-III champion Rota &ndash; are among the biggest of the small. Rota&rsquo;s No. 2 among D-III schools with a grades 9-12 population of 143, and Alconbury&rsquo;s No. 3 at 142.

The numbers problem came into focus earlier this week when Sigonella, enrollment 87, was forced to drop out of the European tournament because of too few players.

Bamberg&rsquo;s the biggest D-III school with 151 students, and Brussels is fourth with 104, and it&rsquo;s indicative of the numbers problem that neither of them is playing baseball. If they were, moreover, it&rsquo;d be at the expense of another sport. Bamberg&rsquo;s girls, for example, elected to play softball this spring and as a result, there weren&rsquo;t enough girls left to form a soccer team. The same undoubtedly would have applied to baseball.

The situation&rsquo;s the same at Brussels.

&ldquo;Once in 2002 and then in 2006, I conducted a survey of 8-11th graders to see if there was enough interest to shift from soccer to baseball/softball,&rdquo; Brussels athletic director Mark McVicker emailed on Monday. &ldquo;We (myself, coaching staff and administration) felt we could not possibly field both a baseball/softball team and a soccer team with our small population, so it was presented as &lsquo;either-or.&rsquo; &rdquo;

Either-or was the case at Menwith Hill, enrollment 72, too, according to Mustangs&rsquo; AD Pete Resnick, who mentioned as an aside he knew of no baseball field in &ldquo;all of northern England.&rdquo;

Even so, &ldquo;We gave both the girls and boys a choice of either softball-soccer or baseball-soccer,&rdquo; Resnick wrote in a Monday email. &ldquo;They chose to play soccer.&rdquo;

Even at Alconbury, with nearly twice the enrollment of Menwith Hill, fielding a complete slate of spring sports diluted the school&rsquo;s talent pool, according to AD Bruce Ballard, who as late as Monday called it a 50-50 proposition that his team would be able to suit up enough players to participate in Europeans.

&ldquo;The addition of baseball has drawn away some who would have come out for track,&rdquo; Ballard emailed on Monday.

Geographical remoteness affects D-III, too. Lajes is so far out in the Atlantic and so small, 55 students, that the Falcons&rsquo; co-ed soccer team consumes 37 percent of the student body, emailed Lajes AD Carter Hoff. Sigonella gets a schedule of regular-season baseball games, although they&rsquo;re all against D-II schools, but for Rota it&rsquo;s a different story.

&ldquo;When the schedule came out, I went to my AD and asked, &lsquo;Where are the rest of the games?&rsquo;&rdquo; first-year Rota coach Chris Kaldahl said by telephone on Monday night. &ldquo;He said: &lsquo;You&rsquo;ve got to find them.&rsquo;&rdquo;

Kaldahl did, pitting his then-17-man squad, which has since lost players to the normal attrition of eligibility and military moves, against the base team and scheduling games, only to see them rained out, against a Spanish club team. Rain also cost Rota half its regular-season DODDS schedule April 28 at Alconbury.

&ldquo;I don&rsquo;t know what the answer is,&rdquo; said Kaldahl, a new hire from Arlington, Va., who teaches physics and chemistry. &ldquo;We shouldn&rsquo;t fly everywhere to have games because the students would miss too much school. The educational component has to come first.&rdquo;

Kaldahl concluded that D-III baseball is what it is. And what it is, for all its challenges, is educational.

&ldquo;When you look at taking time to go to a tournament where there are just two other teams,&rdquo; he said, &ldquo;your head says, &lsquo;This is ridiculous.&rsquo; But your heart tells you what a learning experience this is for your players.&rdquo;